This Morning’s Eamonn Holmes and Ruth Langsford were replaced as Friday presenters by Dermot O’Leary and Alison Hammond at the start of this year. However, the married couple are still responsible for stepping into cover Holly Willoughby and Phillip Schofield during the school holidays. But, This Morning viewers were surprised to see Eamonn and Ruth missing from Monday’s show despite the Easter break continuing until the end of the week.

“Six words I’ve been waiting to say for months, we are at the pub,” Dermot remarked.

“It feels so good, this is like our first jolly,” his co-host added. 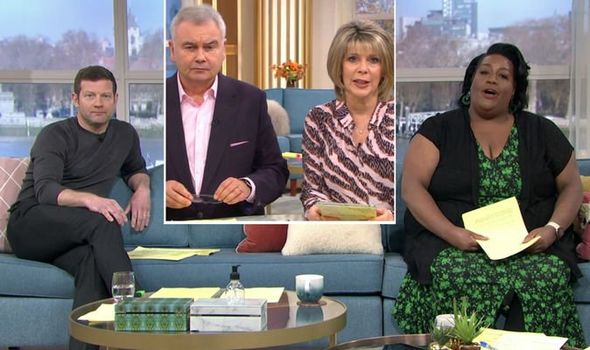 “We are celebrating this milestone throughout the show,” Alison revealed.

However, This Morning fans expected to see school holiday presenters Eamonn and Ruth on their screens.

One tweeted: “Where’s Eamonn and Ruth? This wasn’t the deal? They said we’d get them for the holidays, not half the holidays!  #ThisMorning.”

“What are they doing on, it’s only Monday. Where’s Ruth and Eamonn #ThisMorning,” another asked.

Someone else shared: “What?! Where’s Ruth and Eamonn? #ThisMorning.”

“Where is @EamonnHolmes and @RuthieeL I won’t be watching @thismorning until they back again #thismorning,” another declared.

A fifth added: “#thismorning hang on, I thought Ruth and Eamon were meant to be covering the school holidays?!”

“Have I missed something? Where’s Holly and Phil? Thought they were back today? #ThisMorning

#thismorning where are Phil and Holly?” another remarked.