Nine's renovation contest makes a brisk start to its 15th season, efficiently introducing the five competing couples and the massive task that confronts them at St Kilda's Oslo Hotel. The goal is a conversion into five, three-storey neo-Georgian homes, each with a floor-space that's double the size of the apartments in last year's Gatwick challenge. So, yes, as host Scott Cam cracks with an appropriate level of self-mockery, this will be the toughest Block ever. To emphasise that point, the task for the first week is to complete a bedroom and a bathroom. But first, there are mountains of rubble and rubbish to clear. And with that, one of the country's most successful original formats is again off and running. 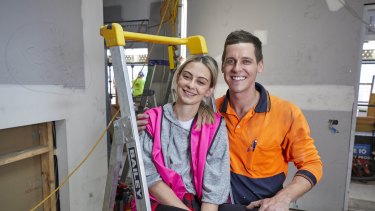 Tess and Luke, contestants on The Block 2019.Credit:NINE NETWORK

Les Norton (Alexander Bertrand) is a beefy redhead from the Queensland backblocks of Dirranbandi. Fleeing trouble at home, he quickly finds himself deep in the dirty business of 1980's Kings Cross. The tone of the opener of this 10-part series is jaunty and the colour palette bright: no Scandi-style brooding here. In an action-packed 24 hours, the naive, upright Les, who's handy with his fists, starts out as a nightclub bouncer but rapidly works his way into the heart of the action. Soon he's immersed in the underbelly of the club world, assisting a henchman (Justin Rosniak) of powerful club owner Price Galese (David Wenham). Swirling through the realm of illegal casinos and ruthless brothel madams are crooked cops and corrupt politicians, as well as an appealing policewoman (Syd Zygier).