When Samantha Mason appeared on “My 600-Lb Life,” she immediately caused a stir amongst the fandom. The fetish model, who made her money by selling clips of herself gorging on food, went on to claim that the show’s trusted surgeon, Dr. Now, “exploited” her for his own ends.

“Most people I know don’t even watch the abomination that is this show, but if you do, and you happen to see me… that is, in fact, me,” she warned in a Facebook status that was subsequently screenshot and shared on Reddit. “I am 400lbs down and will NEVER watch ‘reality’ the same again. It was a learning experience all around,” she shared before calling out Dr. Now. “I also want to say, I found my own surgeons and I have never been in the same state as Dr. Nowzaradan. I was exploited without even the help from the surgeon himself (which is fine- I like my surgeon a lot better.),” she added.

Upset or not, Samantha was able to lose a large amount of weight. So, what does she look like now? Keep scrolling to find out.

She keeps her fans updated on TikTok 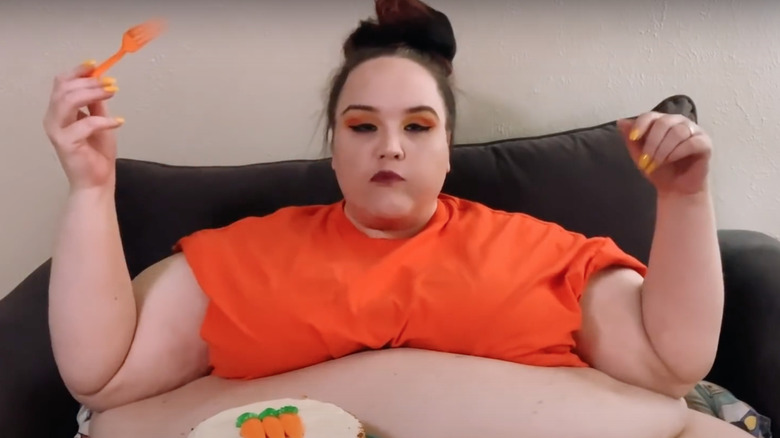 Samantha Mason continues to share updates about her life on her public TikTok page. On TikTok, she’s frequently spotted in a hospital gown and wearing a respirator, so it’s safe to say she’s still not in optimal health. Samantha confirmed in a TikTok in October 2020 that she was able to lose 320 pounds between May and October, and attributed it to going under the knife. She updated followers in December 2020 as she entered rehab, saying in a now-private TikTok (via Looper), “I’m taking advantage of everything that I possibly can in here while I’m trying to heal.”

Despite her weight loss, Samantha still considers herself a “SSBBW,” or a super-sized big beautiful woman model, as defined on Urban Dictionary. In an August 2020 TikTok aimed at her haters, she touted that she has been a model for four years. She revealed previously on “My 600-Lb Life,” per Distractify, that modeling was the only way someone her size could make some money. “In order to make money, since finding a job was out of the question at my size, I chose to start fetish modeling for a website that catered to people who like large women,” she said. “So I have a set up in my apartment where I can film myself eating, and I eat for people.” However, Samantha’s TikTok content is mostly geared toward documenting her transformative weight loss journey.