Home » TV » We Did It. We Assembled the Best 'Grey's Anatomy' Quotes of All Time.

After 18 seasons and over 300 episodes, Grey’s Anatomy’s characters have been through it all: relationships, breakups, promotions, deaths…and, you know, the occasional plane crash or natural disaster, of course. We’ve seen these surgeons overcome huge odds in their personal and professional lives, and this has produced a lot of quotable moments over the years.

Between Meredith’s voice-overs and the wisdom that comes flowing from the doctors of Grey Sloan Memorial hospital, Grey’s Anatomy is filled with meaningful words to live by. These are some of the best quotes from the series, and they will definitely make you relive these sometimes heartbreaking moments all over again.

On getting over Derek: “When I met you, I thought I had found the person that I was going to spend the rest of my life with. I was done. So all the boys, and all the bars, and all the obvious daddy issues, who cared? Because I was done. You left me. You chose Addison. I’m all glued back together now. I make no apologies for how I chose to repair what you broke.” —Meredith Grey

On Meredith putting herself first: “Don’t let what he wants eclipse what you need. He’s very dreamy, but he is not the sun—you are.” —Cristina Yang

Derek’s most iconic line: “It’s a beautiful day to save lives. Let’s have some fun.” —Derek Shepherd

Richard’s first day of internship speech: “A month ago, you were in med school being taught by doctors. Today, you are the doctors. The seven years you spend here as a surgical resident will be the best and worst of your life. You will be pushed to the breaking point. Look around you. Say hello to your competition. Eight of you will switch to an easier specialty. Five of you will crack under the pressure and two of you will be asked to leave. This is your starting line. This is your arena. How well you play? That’s up to you.” —Richard Webber

Meredith’s speech to Derek when he was still with Addison: “Your choice, it’s simple: her or me? And I’m sure she’s really great. But I love you. In a really, really big pretend to like your taste in music, let you eat the last piece of cheesecake, hold a radio over my head outside your window, unfortunate way that makes me hate you, love you. So pick me, choose me, love me.” —Meredith Grey

On compliments that really hit different: “Oh screw beautiful! I’m brilliant! If you want to appease me, compliment my brain.” —Cristina Yang

On the unknown: “As human beings, sometimes it’s better to stay in the dark, because in the dark there may be fear, but there is also hope.” —Meredith Grey

On moving on after a breakup: “It always feels like there is just one person in this world to love. And then you find somebody else, and it just seems crazy that you were ever worried in the first place.” —Lexie Grey

On not getting beat down by fear: “Don’t let fear keep you quiet. You have a voice, so use it. Speak up. Raise your hands. Shout your answers. Make yourself heard. Whatever it takes, just find your voice, and when you do, fill the damn silence.” —Meredith Grey

On surviving pain: “Pain comes in all forms. The small twinge, a bit of soreness, the random pain, the normal pains we live with every day. Then there is the kind of pain you can’t ignore. A level of pain so great that it blocks out everything else. Makes the rest of the world fade away. Until all we can think about is how much we hurt. How we manage our pain is up to us. We anesthetize, ride it out, embrace it, ignore it, and for some of us, the best way to manage pain is to just push through it.” —Meredith Grey

On trauma: “It doesn’t matter how tough we are. Trauma always leaves a scar. It follows us home, it changes our lives. Trauma messes everybody up. But maybe that’s the point. All the pain and the fear and the crap. Maybe going through all that is what keeps us moving forward. It’s what pushes us. Maybe we have to get a little messed up, before we can step up.” —Alex Karev

On getting over your crap: “Being aware of your crap and actually overcoming your crap are two very different things” —Cristina Yang

On what mental health really means: “Not everyone has to be happy all the time. That isn’t metal health. That’s crap.” —Meredith Grey 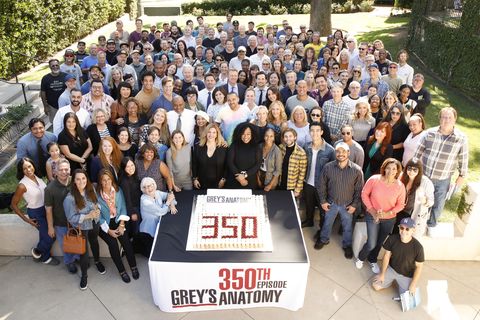 On not missing out: “We don’t get unlimited chances to have the things that we want, and this I know. Nothing is worse than missing an opportunity that could have changed your life.” —Addison Montgomery

On gratitude: “Maybe we’re not supposed to be happy, maybe gratitude has nothing to do with joy. Maybe being grateful means recognizing what you have for what it is, appreciating small victories. Admiring the struggle it takes simply to be human. Maybe we’re thankful for the familiar things we know. And maybe we’re thankful for the things we’ll never know. At the end of the day, the fact that we have the courage to still be standing is reason enough to celebrate.”
—Meredith Grey

On living in the moment: “Did you say it? ‘I love you.’ ‘I don’t ever want to live without you.’ ‘You changed my life.’ Did you say it? Make a plan. Set a goal. Work toward it, but every now and then look around. Drink it in ’cause this is it. It might all be gone tomorrow.” —Meredith Grey

On perseverance: “And if you can’t do it, if you aren’t willing to keep looking for light in the darkest of places without stopping, even when it seems impossible, you will never succeed.” —Amelia Shepherd

On surviving: “There’s an end to every storm. Once all the trees have been uprooted. Once all the houses have been ripped apart. The wind will hush, the clouds will part, the rain will stop, the sky will clear in an instant. But only then, in those quiet moments after the storm, do we learn who was strong enough to survive it.” —Meredith Grey