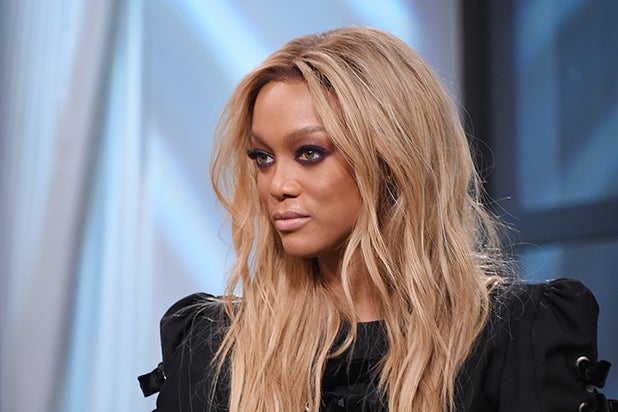 “Dancing With the Stars” host Tyra Banks is shooting down reports claiming that she banned stars of Bravo’s “Real Housewives” franchise from appearing on ABC’s reality competition show.

“She loves Andy [Cohen],” Banks’ publicist added. “She’s been on ‘Watch What Happens Live’ several times. She’s a huge fan of the Clubhouse.”

A tabloid report released this week claimed that Banks, “has never been a fan of the ‘Housewives,’ but the real reason she doesn’t want them on her show is that Bethenny Frankel, NeNe Leakes and Teresa Giudice do not make headlines anymore.”

The story also alleged that Banks, “made it clear that she didn’t want any more ‘Housewives’ in her ballroom.”

In a since-deleted Tweet, Frankel wrote: “Good to know @tyrabanks has clumped me in her no more housewives mandate on @DancingABC. Also good to know-their casting director Deena, who I  has asked me to be on that show multiple x in the last decade. I’m also no longer a housewife, but nobody is bigger than the game Tyra.”

However, Frankel quickly back tracked, attributing her change of heart to the good relationship she has with “Dancing With the Stars” casting director.

“I deleted that last post Bc I really like & have a great relationship with Deena Katz from #DWTS. If @tyrabanks wants to come on my podcast, she is welcome anytime as she has built a successful brand on her own in her own way. #justbwithbethenny.”

“Dancing With the Stars” has had several “Real Housewives” stars appear as contestants during past seasons including, Lisa Vanderpump, Lisa Rinna and Erika Girardi of the Beverly Hills edition, as well as NeNe Leakes, Kim Zolciak-Biermann and Kim Fields from Atlanta.

Wendy Williams Says You Should Stop Believing These Lies About Her