Home » TV » ‘The White Lotus’ Season Finale: Mayhem At Hawaiian Resort As We Learn Who Is In That Casket

SPOILER ALERT: The following story contains details from the Season 1 finale of HBO’s The White Lotus.

“Now, we are starting down a very dark road,” Shane Patton (Jake Lacy) says in tonight’s episode of The White Lotus, “and you’d better be sure you really want to go there.”

While the wealthy man-child’s comments are directed toward his new wife Rachel (Alexandra Daddario), they’re certainly not the only ones headed down a “dark road” in Sunday’s finale “Departures,” written and directed by Mike White. 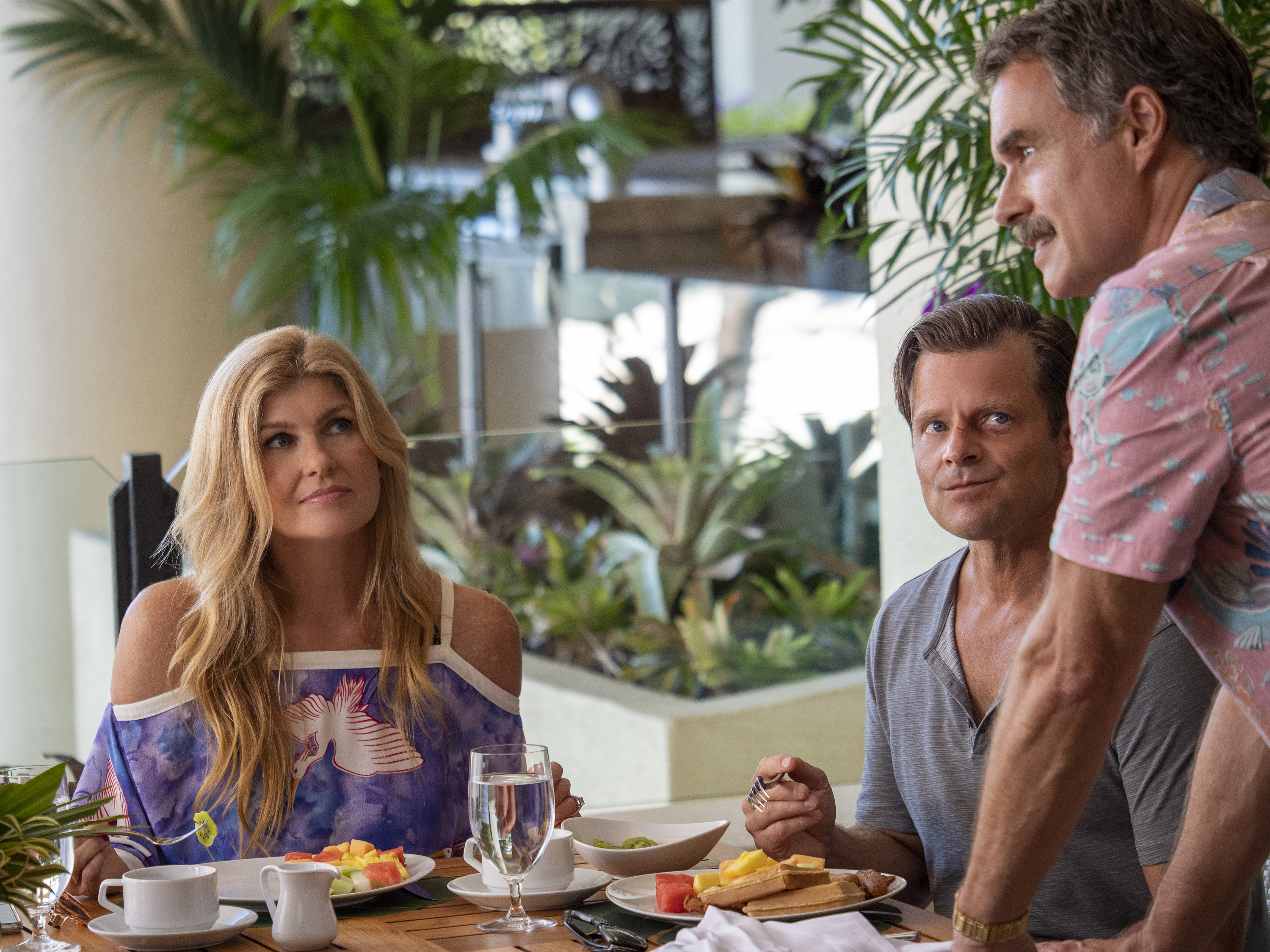 The episode opens on Nicole (Connie Britton) and Mark Mossbacher (Steve Zahn), two of the only people in the series who have managed to stumble upon some kind of happiness. While Mark has been unfaithful in the past, it appears he redeemed himself in the eyes of his wife in last week’s episode, after coming to her rescue, when she walked in on a burglary of their hotel room.

The Mossbachers’ son Quinn (Fred Hechinger) is also in a good place, after setting technology aside, falling in love with nature and bonding with a local group of canoers. The 16-year-old is so happy, in fact, that he tells his parents he has no intention of going home. Instead, he’ll remain in Hawaii, and will go on a Hōkūleʻa through Polynesia with his new friends in the spring. His parents, of course, dismiss his plans, given the fact that he’s still a minor, but his mind is clearly made up.

Even as Quinn is changed for the better by his stay at The White Lotus, his sister Olivia (Sydney Sweeney) finds herself descending ever further into the darkness, alongside her friend Paula (Brittany O’Grady). Olivia suspects that Paula helped her “island lover” Kai (Kekoa Kekumano) break into her mother’s room to steal her jewelry, and is eventually able to confirm it. Paula, meanwhile, suffers from panic attacks as a result of what she’s done. Her actions lead to a fight between the two in which Paula accuses Olivia of using her as “a prop”, rather than viewing her as a real friend, though the two eventually make up.

We never learn what happened to Kai, though it’s safe to presume, based on Paula’s expression, that it wasn’t good. Elsewhere, Shane comes to learn about the hotel room break-in, and uses it as a final piece of ammunition to get resort manager Armond (Murray Bartlett) fired, just before Rachel tells him she made a mistake in marrying him, and can’t be his trophy wife. 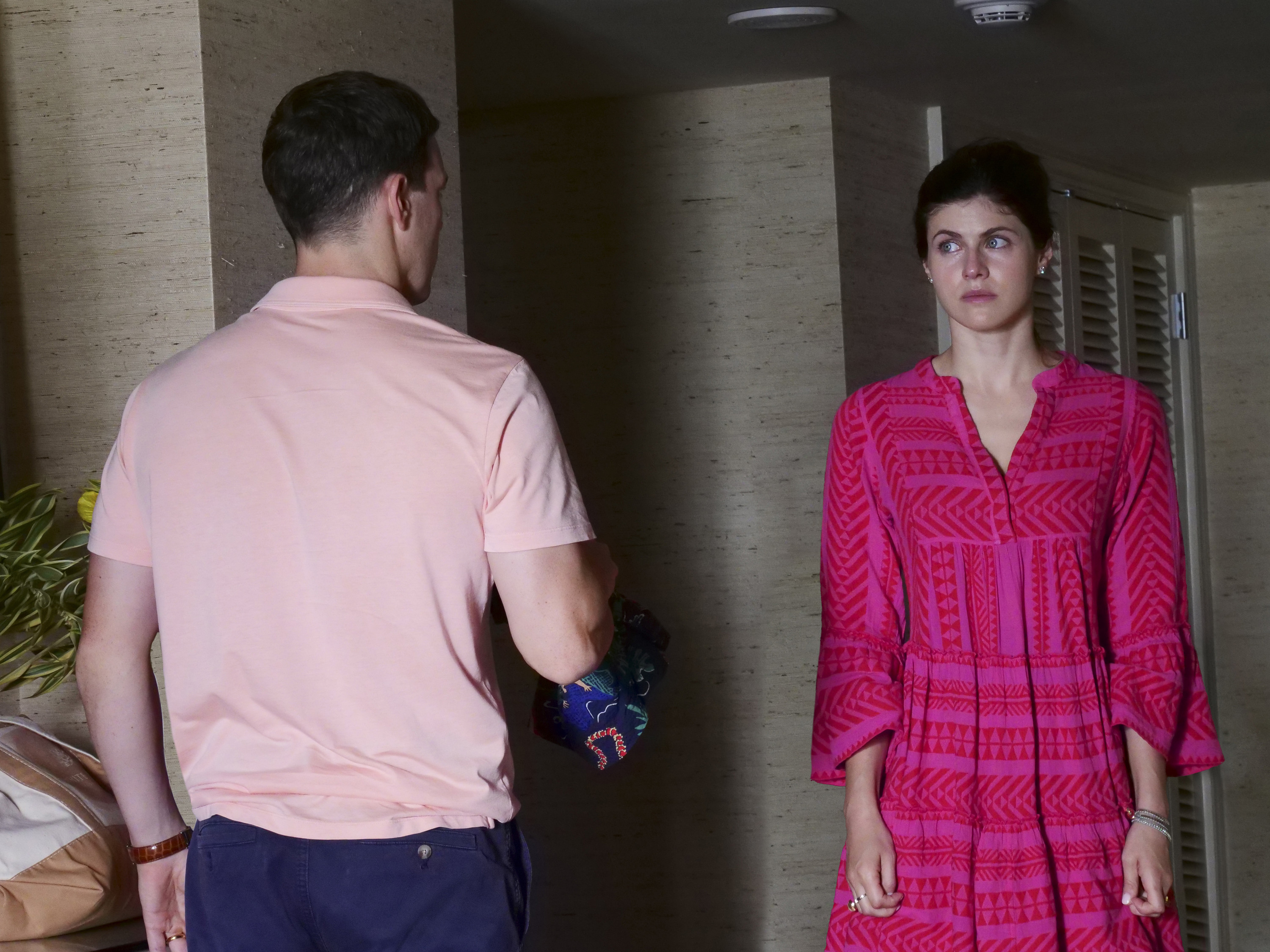 As one relationship crumbles, another is taken to new heights. The morning after Tanya (Jennifer Coolidge) got drunk and freaked out on Greg (Jon Gries), demanding that he throw her mother’s ashes in the trash, she’s surprised to find her new lover is still in her bed. He’s truly happy with her, so she decides to rent a home in Aspen, near his, once their vacation is up—committing to the decision, even after he reveals that he’s had “some health issues” and could drop dead at any moment.

Unfortunately, it seems that Tanya only has room for one intimate relationship in her life. While she hit on major breakthroughs in her personal development with assistance from Belinda (Natasha Rothwell), she ultimately blows the spa manager off, declining to invest in her wellness business after promising her the world. Belinda is utterly devastated as her dreams of escaping the hotel dissolve before her eyes, and Tanya promises to call, though we know she never will.

Around the same time, we reach the beginning of the end, as Armond learns that he’s being fired and decides to “crash and burn”, going on an all-out bender in his office with his employees Dillon (Lukas Gage) and Hutch (Alec Merlino). After the sun sets, he leaves his office covered in sweat, for his “last dinner” as manager, gleefully greeting guests and handing out menus in a balletic, slow-motion sequence.

At dinner, Shane tries and fails to appeal to Rachel, asking her why she’s “ruining everything.” He then goes to the bar, as a fully intoxicated Armond simmers with rage toward him, deciding to get his revenge against the guest who ruined his life.

He uses his staff key to barge into Shane’s empty room, so that he can defecate inside his suitcase. Of course, just as he does, Shane walks in, and he’s forced to hide in the closet. When Shane discovers Armond’s handiwork, he’s incensed and calls the front desk. But when he senses that someone else is inside the room, a cat-and-mouse game ensues. Already believing that there’s “a violent criminal running around the hotel,” given what he heard from the Mossbachers, he grabs a large knife intended for cutting pineapple. In the end, he accidentally stabs Armond to death. He is cleared by police to depart the island the following morning. 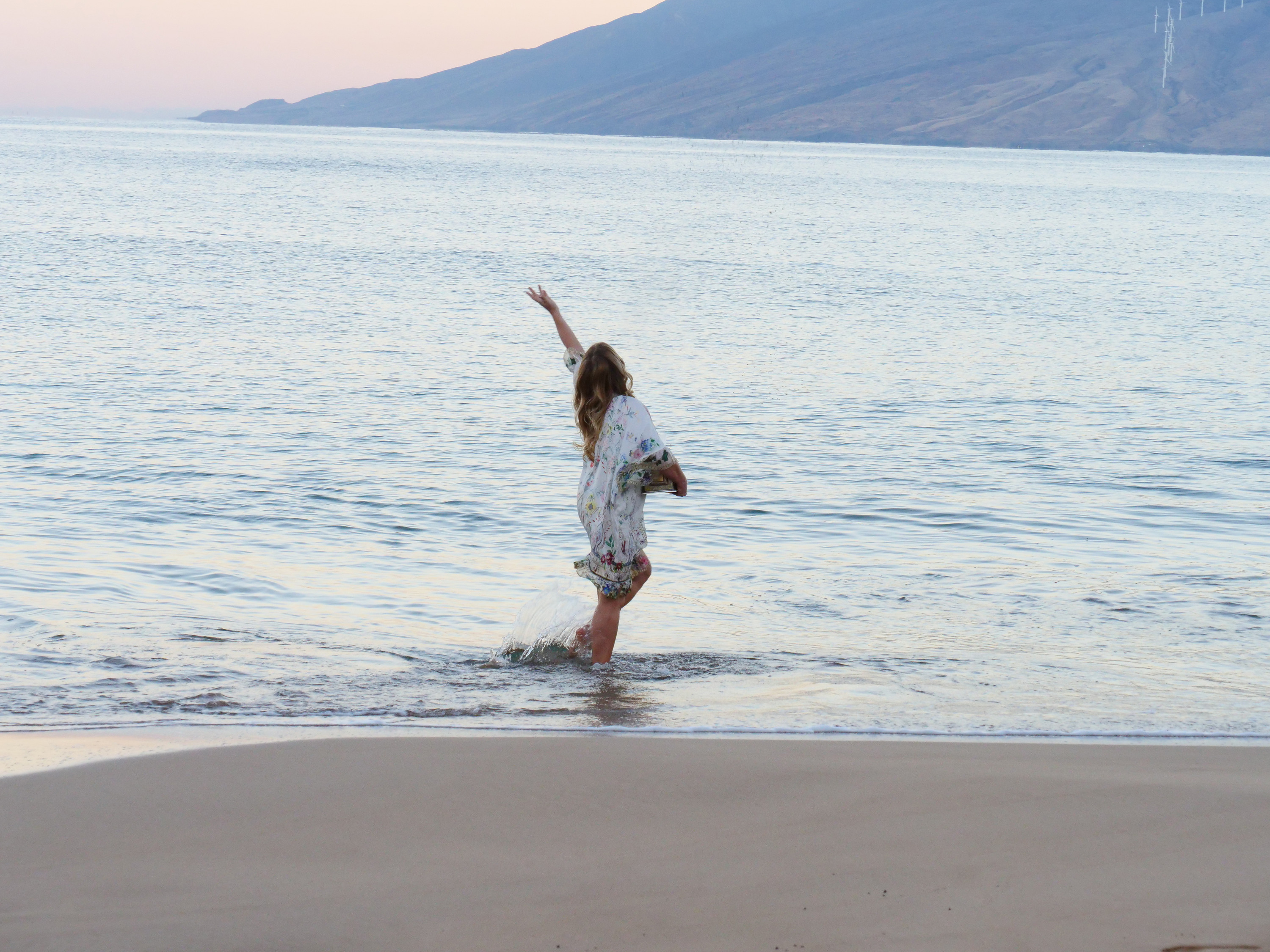 Later, we watch Tanya scatter the rest of her mother’s ashes into the ocean. We then cut to the airport, where Shane looks on, as Armond’s remains are loaded onto his plane—in a repetition of the sequence from Episode 1. Then, he locks eyes with Rachel, and goes to speak with her. The pair ultimately reconcile, and decide to stay together, with Rachel somberly assuring her husband that she “will be” happy.

After Tanya and Greg get on their flight, we’re left to follow the Mossbachers. As his family members board their plane, Quinn intentionally lags behind, eventually running out of the airport, to freedom.

The penultimate moment of the season also mirrors one from Episode 1. As a new boat full of guests arrives at the hotel, Belinda is among those waiting to greet them, trying hard to fake a smile. The season then wraps up with a shot of Quinn, happily canoeing out to sea.

Debuting on HBO on July 11, The White Lotus was created, written and directed by White. White also exec produced the satirical series alongside David Bernad and Nick Hall, with Mark Kamine serving as co-executive producer.

While the six-parter was initially billed as a limited series, it was renewed for a second season on August 10, after breaking out as a water-cooler phenomenon, akin to HBO’s Mare of Easttown and HBO Max’s The Flight Attendant.

HBO says the next chapter of The White Lotus will be set at another White Lotus property and follow a different set of vacationers. Whether any Season 1 characters will return, in any capacity, is not yet clear.