[There are spoilers ahead for the finale of The Undoing. If you haven’t watched the episode yet, continue at your own risk!]

For weeks, everyone on the internet has been trying to figure out who killed Elena Alves. The central mystery to HBO’s The Undoing has kept people busy all season. First, it was obviously Jonathan. But then maybe it was Grace? Or her father, Franklin? But what about Henry? The twists and turns finally came to an end with last night’s finale, and the killer was exactly who the show had been pointing to all along: Jonathan. While some viewers and critics thought the reveal was anticlimactic, Cosmopolitan hopped on Zoom with the show’s director, Susanne Bier, to talk about why it had to be that way.

I was shocked that Nicole Kidman and Hugh Grant had never played an onscreen couple before. Why do you think they worked well opposite each other?

They’re both super attractive, beautiful, fun. But I think both of them have, there’s this intrinsic sadness to both of them, where you feel they just have a real, profound connection. And that’s why I thought they would be a great couple. And maybe just because they are so sexy.

They were so fun to watch, even when their characters hated each other!

I was sure they were going to have fun. I’ve heard from both of them that many years ago, they’d been out, like they’d been out partying together a couple of times. And I was like, “Okay, that sounds great. Let’s go for that.”

Something I was curious about was where Franklin got his money, and we never found out! Is that something you had in the backstory for the character?

That’s something we spoke with Donald Sutherland about. Franklin comes from a family of money and he’s been very, very good at a multiplying whatever he had inherited, whether it’s oil, or whether it’s shipping. He’s been an owner of a huge big company.

The final reveal at the end of the show was one the series had been pointing to all along, but the audience didn’t want to believe. Why was that appealing to you as a director?

It’s super appealing because it’s such a fundamental human condition. We define the world the way we define it, we see the world the way we want to see it, as opposed to what is really there. People are brilliant at recreating the truth according to their wishes. This is an example of that. We, as an audience, are experiencing exactly what Grace is experiencing. We realized that Jonathan was not who we really thought he was in the beginning. He has a lot of remorse, so little by little we come to forgive him. And little by little we come to and see what we actually should see. All the evidence points to him, but we want to believe it’s everyone else. But Jonathan is taking the audience on a ride, exactly the same way he took Grace on a ride.

I think race definitely has something to do with this. As an upper class white man, we give Jonathan every benefit of the doubt. I was wondering if you could speak to that.

It’s no coincidence that he is a white, entitled man. We were filming the series when Jeffrey Epstein got arrested, and I kept thinking, Epstein managed to fool so many people, and he managed to be protected by his charm, and by his connections, or by being this entitled white man. To a point, Jonathan has a bit of that. He is an entitled white man, and we want to believe him and we want to trust him. It’s not arbitrary that he was played by Grant, who’s the most charming man in the world. We want to be seduced by Jonathan.

And we all have a history of being charmed by Grant, so it’s not surprising that we would want to find reasons to believe this character.

Exactly. We often want to find ways to believe that charming, white, entitled men didn’t do it.

What did you hope the audience would feel as the end credits rolled?

There’s a moment during that scene on the bridge where Jonathan is ready to jump, but he doesn’t, and ends up in police custody instead. Why was that important to you?

He’s so delusional that when he hears Grace’s voice, he thinks she’s coming back to him. And that’s her opening to grab Henry, and that’s the police’s opening to catch him. I think he needs to be brought to justice. I think it was crucial that Henry was safe from seeing his dad kill himself. 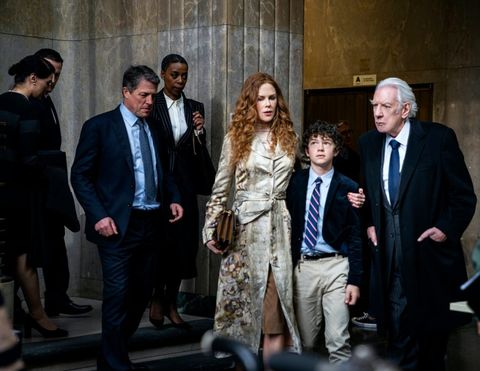 There was a post-credits interview where Grant said he wasn’t sure if Jonathan loved Grace and Henry as much as he loved how they loved him. How do you feel about that?

Is a sociopath capable of real love? I do think that a lot of the way sociopaths behave is sort of the reflection. I do think Grant is right, that he’s sort of in love with the feeling that they love him, which looks like he loves them. It’s very similar to real love, but it isn’t real love.

This was a show that people had lots of theories about. What was that like for you as a director?

It was completely fascinating and very rewarding, because we’d hoped that we could transfer that experience that whatever Jonathan does to Grace, we could do to the audience.

The Undoing is a miniseries based on one book, but would you ever want to do a second season?