Home » TV » 'The Masked Dancer' Reveals Another Celebrity Contestant: And the Zebra Is …

Seven competitors down, three to go 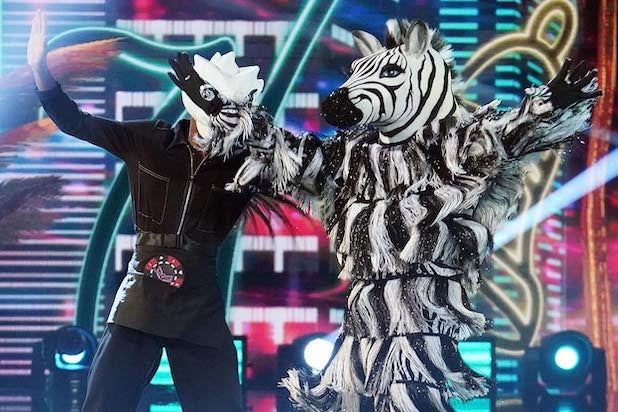 (Warning: This post contains spoilers for Wednesday’s “The Masked Dancer.”)

Fox’s “The Masked Dancer” revealed its Top 3 contestants with Wednesday’s episode, eliminating and unmasking one more competitor ahead of next week’s Season 1 finale.

During the hour, Tulip, Cotton Candy, Sloth and Zebra all took the stage to perform individual dances to their chosen songs.

After each of those contestants got on their feet, it was time for panelists Ken Jeong, Paula Abdul, Brian Austin Green, Ashley Tisdale and guest judge Will Arnett to vote for their favorite dancers and, in doing so, determine which performer would be kicked off ahead of the Season 1 finals.

The contestant who came out on the bottom was Zebra, who did a dance to Bobby Darin’s “Mack the Knife.” He was unmasked and revealed to be boxer Oscar De La Hoya. Arnett and Green correctly guessed that Zebra was De La Hoya, but the other judges’ incorrect guesses included The Miz, Conor McGregor and Floyd Mayweather.

Next week, Tulip, Cotton Candy and Sloth will return to battle it out in the Season 1 finale to see who is crowned the winner.

“The Masked Dancer” airs Wednesdays at 8/7c on Fox.