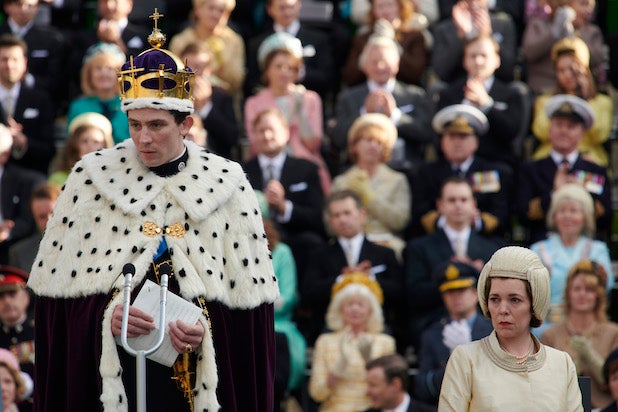 (Warning: This post contains spoilers for “The Crown” Season 3 — and also British history.)

The sixth episode of the third season of “The Crown” features the introduction of an older Prince Charles, as he prepares for and gives his first almost king’s speech to his subjects at his investiture in Wales in 1969, a ceremony in which he formally assumed the title of the Prince of Wales.

In real life, Charles learned and recited this speech both in English and Welsh — and so did Josh O’Connor, the actor who plays the prince on Season 3 of Netflix’s royal drama.

“I learned the entire speech in Welsh. I know, yeah, pretty intense,” the British actor told TheWrap of his preparations for Episode 306, titled “Tywysog Cymru.” “I did a film years ago in Wales where I played a Welshman, but I didn’t speak any Welsh. But I feel a real affinity for the Welsh people and the Welsh language. It was sort of the most exciting thing. As soon as I took on the role, that was the first episode I’d read, my first episode as Charles and that was my initial seizing of panic cause I just thought, ‘I’ve got to learn this entire speech in Welsh.’ And Charles himself struggled with it. And my first-ever day filming with everyone– so I did a fair amount of filming on my own, and with other actors, but my first day filming with Olivia Colman, Helena Bonham Carter, Tobias Menzies, Marion Bailey, Erin Doherty — all these people, my first day was doing that speech in Caernarfon Castle in Wales.”

“So all I remember thinking, ‘I wish they could see me on a day when I was playing Prince Charles speaking English.’ And how they must think I’m completely mad, which I’m sure they did,” O’Connor said.

“But it was fun and we worked very hard to make sure that it was right. And in the end, I received a letter from a member of the public in Caernarfon who was an extra that day, and they sent me a lovely note and a candle saying, ‘Thank you to the true Prince of Wales.’ Which I thought was very sweet,” he added.

O’Connor told us that the thing he “found most profound and most helpful” while playing Elizabeth’s heir apparent came later in the season.

“It was kind of just a realization that [creator Peter Morgan] wrote in Episode 8. Charles is having a dinner with Camilla Shand (played by Emerald Fennell) and he refers to a book called ‘Dangling Man’ by Saul Bellow, in which a character is waiting to be drafted to go to war, to be sent to his certain death,” he said. “And Prince Charles kind of relates to that because he feels he lives in this sort of purgatory. And to me that was a profound kind of idea that I found deeply moving and very interesting. Until his mother dies, he cannot be king and therefore, what does he do?”

As for O’Connor’s on-screen relationship with Fennell, Season 3 sees the young prince and Camilla torn apart by his family in the ’70s (though history shows they do come back together), which is a conflict that will continue for Charles into Season 4, as he meets Princess Diana (who will be played by Emma Corrin).

“In this scenario, there is a conflict between duty — duty to your nation, duty to the public and duty to your family. And what Charles is having to learn, just as when Claire Foy was playing the Queen in Season 1, is that duty overrides everything and it has to override everything,” O’Connor says. “But that’s an incredibly hard lesson to learn and I think what the strain between the Queen and Charles comes from is exactly that and trying to keep to that and this mother and son relationship.”

“And the added difficulty is that Olivia Colman is the warmest, loveliest person in the whole entire world,” he continued. “So you’re interacting with this cold person in that scene, but after almost every take she’s been like, ‘Oh, I’m so sorry!’ So that was quite funny. But obviously, as any actor would say, doing things with her was a dream come true.”

“The Crown” Season 3 is streaming now on Netflix.