Home » TV » The Chase: ‘I taunted you into it’ Paul Sinha makes stark admission as player DEVASTATED

The Chase continues to remain as popular as ever on ITV with host Bradley Walsh joining chasers Paul Sinha, Mark Labbett, Shaun Wallace, Anne Hegerty and Jenny Ryan in a race against the clock as players use their best trivia knowledge to take home some prize money.

Tonight’s episode got off to a positive start when full-time mum Sarah, 38, managed to bank £5,000 in her cash builder and swept down the board to get back to her team.

The 60-year-old book-master from Huntingdon was thrilled when he won £8,000 in his first round, and was given the opportunity to take the higher-offer of £36,000 from the Sinnerman.

Seizing the moment, Paul appeared to be doing well, but he lost at the last hurdle with a literature question.

The Sinnerman had already praised the player for his intelligence, and while the other chasers would normally make a cheeky jibe and rejoice over their triumph, Paul simply couldn’t do it.

In an out-of-character move for the chasers, Paul suddenly lamented: “I’m not meant to be feeling sorry for Paul but I do.

He then admitted: “I did sort of taunt you into the higher offer.

“And deliberately so, because I felt it was my best way of getting rid of you.” 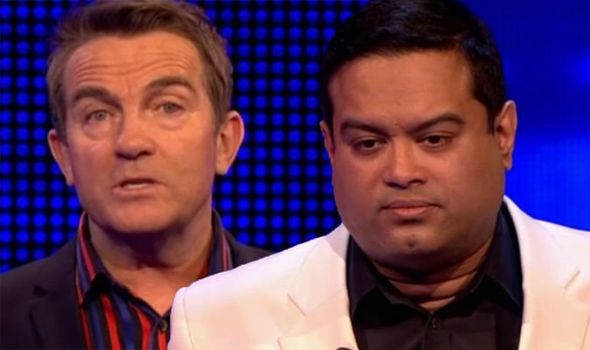 I did sort of taunt you into the higher offer

Eager to move on with the game’s tight-schedule, host Bradley, 58, simply declared: “Indeed.”

While there was more bad news to come for the team when 49-year-old support-worker Mary was knocked out by the chaser, scientist Danny, 25, took his £4,000 back to a relieved Sarah.

The duo gave the final a valiant effort, but the Sinnerman managed to beat them with a whopping 57 seconds remaining.

What’s more, the remain team members failed to achieve either of the two pushbacks available.

Speaking about where he thought the team had initially gone wrong, Paul said: “The odd thing was I think they just went a bit too quick, which is an odd thing to say about a team.”

He later noted: “The turning point for the game was the Mayor of Casterbridge [player two Paul’s final wrong answer].

“If Paul had got that right we would have seen a very different final chase.”

The group were disappointed to lose the game but insisted they’d had a “brilliant” day and shook hands with the show’s host.

Paul Sinha delivered another surprising twist when he gave an incredibly high offer to player four Danny – £65,000 – but the 25-year-old chose to play it safe and take the middle offer insteasd.

The Chase continues Monday at 5pm on ITV.

Who is Family Fortunes host Les Dennis and when was he married to Amanda Holden? – The Sun