Home » TV » The Challenge Recap: This Game Is (Still) Ugly — Plus, Who Earned the Last Gold Skull for the Guys?

Apparently some of The Challenge‘s rookies didn’t get the memo: This game is ugly.

On Wednesday’s episode, Olympian Lolo Jones got into a heated exchange following the daily challenge, while Amber M. grew suspicious of one of her closest allies, Amber B. Why is everyone so shocked when their competition turns shady? (Beats me.) Looks like a few of the newbs are in for a rude awakening. Here are the highlights from Episode 8 of Double Agents.

Now that Lee and Kam both have their skulls, the duo talks about shifting their target to Theresa. But they want to wait until they’re positive it’s a female elimination day before pulling that trigger.

Lolo realizes she’s not getting thrown into elimination because no one wants her to get her pass to the final. She knows she needs to win a challenge in order to get her opportunity, but things aren’t exactly copacetic between her and her partner, Nam. CT feels he’s in the same boat; no one wants to see that monster in elimination or the final.

CHALLENGE ACTIVATED | In “All Brawl,” competitors search a giant mud pit for an iconic Challenge relic. The winners of each heat will then move on to Phase 2.

In Heat 1, Nany finds the relic first, but Lolo quickly activates her beast mode. After Nany throws the goods away, Kam snatches it and runs in for the win. Lolo then blows a gasket, accusing Aneesa of choking her from behind. If Lolo wants everything to be fair, she showed up to the wrooong game.

In the guys’ first heat, Nam finds the relic, but pretends he’s still looking. He waits for the right moment, and when nobody’s paying attention, he sprints to the finish line. Gabby and CT take Heats 3 and 4.

In Phase 2, it’s CT vs. Nam, and Gabby vs. Kam, only this time, players must grip onto the relic and wrestle it away to defeat their opponent. TJ sounds the horn, and the men go ballistic. Nam takes a bunch of elbows to the face as CT crushes him against the side of the pit, and as expected, Nam’s cooked on this one. Kam then wins for the women.

TJ then announces a sudden death third round where CT and Kam, along with their partners, must fight it out for the whole shebang. The first team to win both rounds will become the next Double Agents. CT is immediately irked; he thinks there’s no way in hell Big T will ever beat Kam and… he’s absolutely right. Kam quickly starts tossing T around like a rag doll and seals the deal. Kyle then beats CT, though CT half-asses the face-off, knowing the cards weren’t in his favor. Regardless, Kyle and Kam become the new Double Agents! 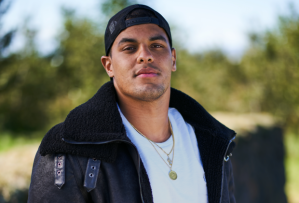 DELIBERATION | The two K’s quickly weigh their options. Kam wants to protect Aneesa, but the cheeky Brit wants to drink the blood of his enemies, naturally. At the house meeting, Mechie and Amber M.’s names are thrown around, as are Aneesa and Fessy’s. It comes time to vote, and when the Double Agents get the results, the Compromised Agents are… not revealed to us! For the first time this season, we only see Kyle and Kam’s reactions, but we don’t see the results yet! Dang.

Oh, and Amber M.’s hunches were right on the money: Her ally Amber B. totally voted her in. Savage.

Since Lolo won’t STFU about what happened at the challenge, Aneesa makes a classy move and apologizes . (I digress, but shouldn’t an Olympian sort of expect the competition to get ruthless? Insert all of the eye rolls here.) Anyhoo, the two squash their beef.

THE CRATER | TJ announces that Amber M. and Mechie are the Compromised Agents, so Kyle and Kam throw Nany and Josh into elimination to give one of them a chance to earn his or her skull. It turns out to be a guy’s night, so Josh and Mechie go head-to-head. (Anyone else praying Mechie takes Josh out? Pretty, pretty please, reality TV gods?) In the elimination, contestants must solve a puzzle, which will then tell them which targets are breakable on their massive board. From there, it’s the same elimination Aneesa and Tori did a few weeks back — pull a container of heavy “bombs” over, and toss the weighted bombs at all of the targets to win.

Josh destroys Mechie on the slide puzzle and quickly collects his bombs, but his throwing skills… those need some work! The entire cast, plus TJ, shares a few laughs at his expense, but Josh eventually gets his act together and knocks Mechie out of the competition for good. He then sticks with Nany as his partner, while Amber M. becomes a Rogue Agent.

Well, shantay Josh stays. Please share all of your thoughts and feelings in the Comments below!

EastEnders spoilers: Gray Atkins finally admits he is violent to his therapist