Home » TV » The Capture ending explained: What happened at the end? 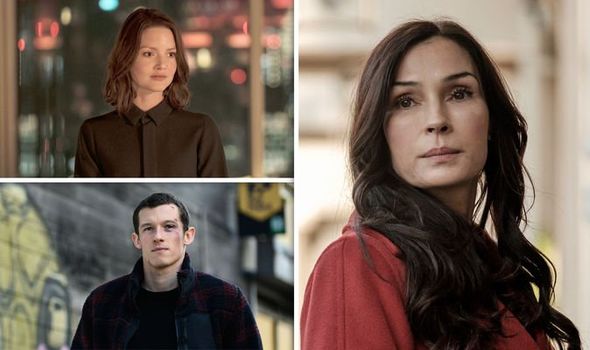 Season two of The Capture airs on BBC One on Sunday (August 28) at 9pm with the full first series back on BBC iPlayer for audiences to watch for the first time or re-watch.

The first series of The Capture concluded back in October 2019 with the story resolved. Titled Correction, the finale saw things coming to a head for all the characters. Here’s a rundown of the biggest plot points from the last episode.

WARNING: This article contains major spoilers from The Capture

The biggest takeaway was soldier Shaun Emery (played by Callum Turner) went to prison for the death of Hannah Roberts (Laura Haddock).

He was blackmailed by both American and British intelligence operatives to take the fall for the murder with “diminished responsibility” being cited for the killing.

However, detective Rachel Carey (Holliday Grainger) told Shaun’s ex-wife that he wasn’t guilty – nevertheless, he would be spending a chunk of time behind bars.

Although the real footage of the crime was online but no one believed it and Correction became a conspiracy theory.

Shaun did kill the man in Helmand

Things came full circle after it emerged that Shaun did kill a man in Afghanistan during his tour.

He told his wife he’d tried to convince himself of the story the courts heard.

The soldier fully accepted the truth of what had happened and even though he seemingly got away with the crime, he paid for another one.

Shaun was seen incarcerated with the character accepting this needed to happen and he needed to pay for his past mistakes.

She initially wanted to expose Correction to stop Shaun for going down for a crime he didn’t commit.

However, when she realised her efforts were futile, she decided to join the force and take down suspects.

Nevertheless, she kept hold of the footage of Hannah boarding a bus – which proved Shaun’s innocence – for a rainy day.

Frank Napier got in trouble with Jessica turning up

Frank Napier (Ron Perlman) got a major slap on the wrist from his superiors when the mysterious Jessica (Famke Jassen) was drafted in from Washington DC to solve the mess he’d made.

She managed to weed out Eli Jacobi (Alexander Forsyth) as the mole in Frank’s team and took him away.

Lawyer Charlie (Barry Ward) also seemed to be taken away by Jessica as she left the country in what seemed to be soft rendition.

The practice of Correction was allowed to continue unimpeded, now simply regarded as a conspiracy.

In perhaps the most Orwellian scene of the whole series, Gemma told Rachel: “Correction is not fake evidence, it’s truth re-enacted.”

She made her case to the green officer, explaining that the footage was accurate and took dangerous suspects off the street.

Although the footage wasn’t real, all the other evidence was completely spot-on.

The Capture series 2 starts on BBC One on Sunday, August 28 and series 1 is available on the BBC iPlayer

Here's What Caused The Zombie Virus, According To Walking Dead Creator Robert Kirkman