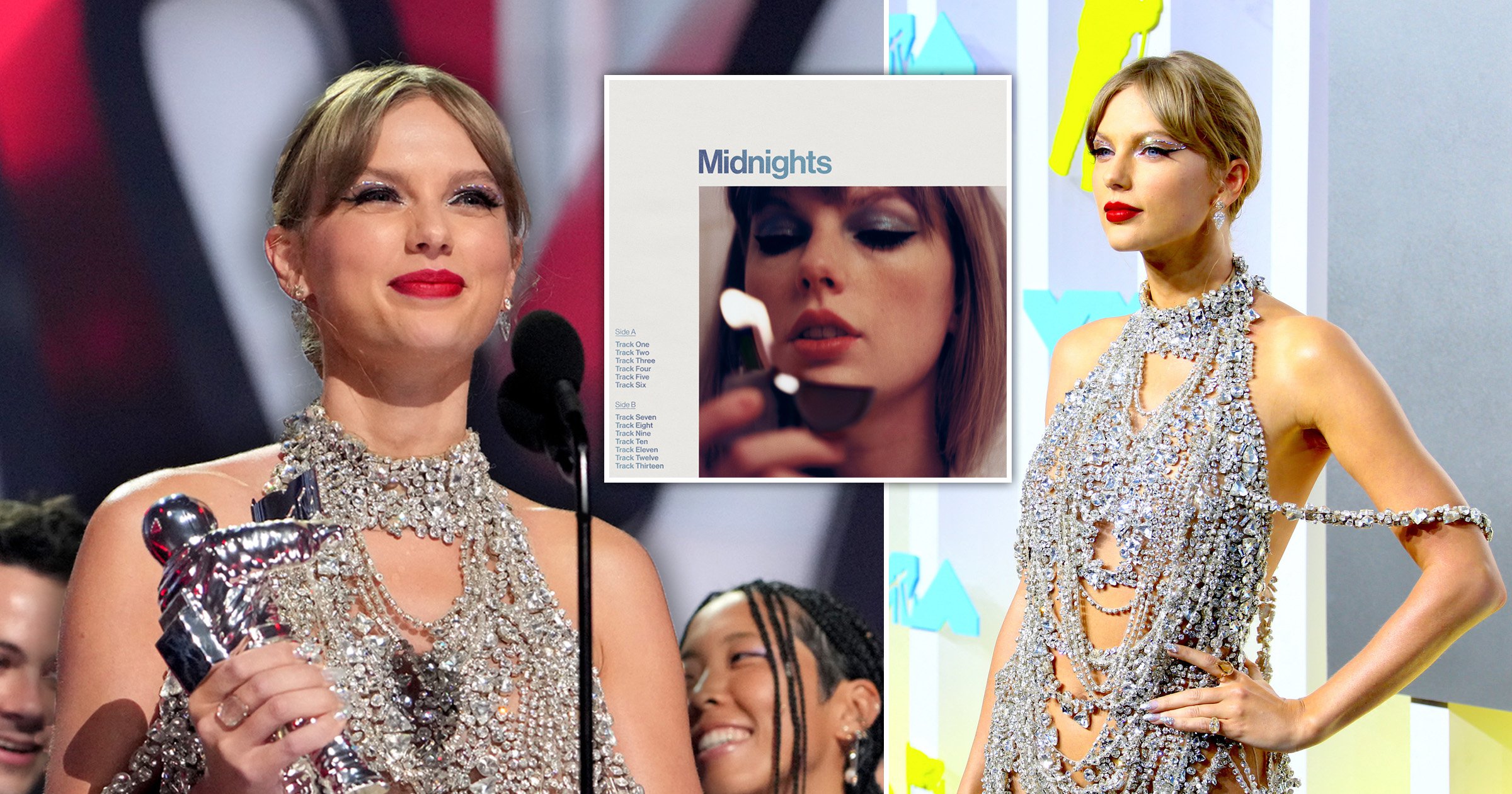 Taylor Swift doesn’t do anything by halves, and she sent fans into a frenzy at the 2022 MTV VMAs by announcing a brand new album, moments after scooping the evening’s top award.

The pop megastar left everyone speechless when she rocked up to the red carpet unexpectedly and, in true T Swizzle style, she not only attended to pose for a few pics, but also to drop a bombshell.

She looked stunning in a bedazzled gown, covered head to toe in jewels and glittering like a human discoball.

Taylor teamed the dress with a pair of equally glitzy heels, sweeping her hair back and, of course, donning her signature red lip.

The singer – who was spotted singing and dancing along in the crowd during various performances – took home several awards on the night, including the coveted best video and best longform video, for All Too Well (10 Minute Version) (Taylor’s Version).

Taking to the stage for the second time in the evening, the former country musician said: ‘I’m so honoured to have been recognised alongside such amazing artists and directors.

‘For the first time in VMA history, four of the directors in the video of the year category are women.

‘You guys, I’m just so proud of what we made and with every second of this moment and we wouldn’t have been able to make this short film if it wasn’t for the fans.’

As for the video for All Too Well (10 Minute Version) (Taylor’s Version), the VMA-winning project features Stranger Things star Sadie Sink and Teen Wolf star Dylan O’Brien, and went viral earlier this year after fans speculated the song was based on Swift’s break-up with actor Jake Gyllenhaal.

In her speech for best longform video, Taylor thanked Sadie and Dylan, adding that the production team had ‘put their entire hearts’ into the mini film.

The 2022 VMAs was a night to remember once more, opening with a surprise performance from music superstar Fergie, who sang her hit song Glamorous and First Class with Jack Harlow.

Meanwhile, hip hop star Nicki Minaj scooped the video vanguard award and performed an explosive medley of her songs as she made her entrance.

Big British names largely lost out to US counterparts at this year’s awards, with only Harry Styles taking home a major prize with album of the year.

The 28-year-old apologised to fans for his absence at the show despite being ‘just down the road’ performing at Madison Square Garden in New York.

This year’s VMAs took place less than an hour away at the Prudential Centre in Newark, New Jersey.

Artist of the Year

Song of the Year

Adele – Easy on Me

Billie Eilish – Happier Than Ever WINNER

Album of the Year

Video of the Year

Push Performance of the Year

November 2021: Nessa Barrett – I Hope Ur Miserable Until Ur Dead

December 2021: Seventeen – Rock With You WINNER

Harry Styles – As It Was WINNER

Eminem and Snoop Dogg – From the D 2 the LBC

Future featuring Drake and Tems – Wait for U

Nicki Minaj featuring Lil Baby – Do We Have a Problem? WINNER

Jack White – Taking Me Back

Avril Lavigne featuring Blackbear – Love It When You Hate Me

Måneskin – I Wanna Be Your Slave WINNER

Normani featuring Cardi B – Wild Side

Summer Walker, SZA and Cardi B – No Love (Extended Version)

The Weeknd – Out Of Time WINNER

BTS – Yet to Come (The Most Beautiful Moment)

Billie Eilish – Happier Than Ever: A Love Letter to Los Angeles

Harry Styles – As It Was WINNER

Normani ft Cardi B – Wild Side

Harry Styles – As It Was

Coldplay and BTS – My Universe

FKA twigs featuring The Weeknd – Tears in the Club

Harry Styles – As It Was

Normani featuring Cardi B – Wild Side

The Weeknd – Take My Breath