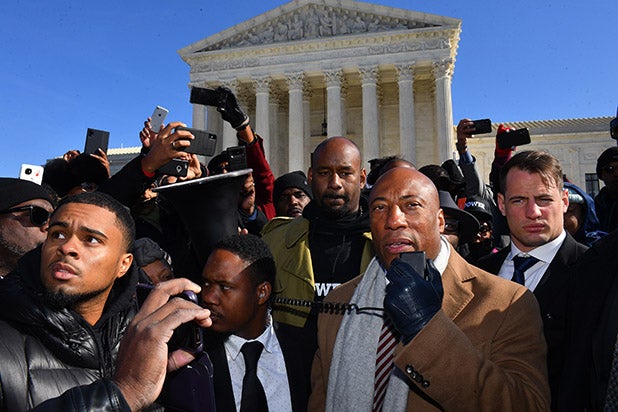 The U.S. Supreme Court heard oral arguments in Byron Allen’s racial discrimination case against Comcast on Wednesday, pressing both sides with questions about the legal standards for such claims.

The case stems from a 2015 racial discrimination lawsuit in which Allen and his company Entertainment Studios Networks accused Comcast and other telecoms of refusing to carry ESN’s cable channels, which include Cars.TV and Pets.TV, because of Allen’s race.

Allen’s $20 billion lawsuit was dismissed three times at the district level, but the Ninth Circuit appeals court reversed that decision earlier this year. That Ninth Circuit ruling, which set a lower legal standard for demonstrating discrimination, is now being challenged by Comcast before the Supreme Court.

Lawyers for Comcast are arguing that Allen should have had to demonstrate that race was a determining “but-for” factor in Comcast’s decision not to carry ESN’s channels in order for the discrimination suit to go to trial. As in, if all the other factors about the negotiation had been the same “but for” Allen’s race, the outcome would have been different.

Allen’s side, backed by the Ninth Circuit decision, says plaintiffs in such cases simply have to demonstrate  that race was a “motivating factor” — a more relaxed standard.

The challenge hinges on the court’s interpretation of the 1866 Civil Rights Act, which grants nonwhite citizens the same ability to make and enforce contracts. Previous federal court decisions have varied in how the law is interpreted in terms of the legal standard necessary to bring a discrimination case, and the Supreme Court’s ruling in the Allen case could have far-reaching implications regarding how such lawsuits are evaluated going forward.

During Wednesday’s oral arguments, the justices pressed Allen’s attorney, Erwin Chemerinsky, on the reasoning behind the Ninth Circuit’s decision, given that the “motivating factor” standard as outlined by the appeals court only applies in the pre-trial stage of a discrimination suit. Once the case goes before a jury, plaintiffs would still have to meet the stricter “but-for” standard in order to prevail.

Justice Neil Gorsuch suggested that it would be “unusual” to have different standards for the same case. Justice Elena Kagan, seemed to agree, saying it would be “confusing to throw in a different causal standard” for the pre-trial stage of a legal proceeding.

“That seems wrong, right?” she said, later asking Chemerinsky, “Don’t you think that the 9th Circuit has to be reversed?”

Chemerinsky argued that enforcing the stricter standard at the outset would be an “insurmountable burden” for plaintiffs before their case is allowed to move forward to the process of deposing witnesses and discovery.

Civil Rights groups have sided with Allen in the case, with the Lawyers’ Committee and the NAACP Legal Defense and Educational Fund both filing amicus briefs in support of Allen. The Trump administration and the U.S. Chamber of Commerce are backing Comcast.

One possible outcome, raised by Justice Brett Kavanaugh, was that the court of issue a ruling that vacates the Ninth Circuit decision and orders the court to re-hear the case with the clarification that the stricter burden applies to all stages of the proceeding.

The Supreme Court’s ruling in the case is expected by the end of next June.

Vikings viewers fume as they notice huge change in episodes ‘What am I missing?!’