With more years behind him than ahead, Star Trek: Picard’s eponymous captain will need to address important, unanswered questions about himself when the Paramount+ series returns for Season 2 this Thursday.

New episodes find Picard and his crew traveling back to the 21st century in the hopes of saving the galaxy’s future. As he encounters familiar faces and new friends, he’ll also be forced to look inward and reexamine some of the choices he’s made — specifically when it comes to matters of the heart.

For Patrick Stewart, who plays Picard, getting in touch with the beloved admiral’s romantic side is exciting new territory.

“You will see things in Season 2 which will be unexpected and surprising, and it will be romantic,” Stewart tells TVLine. “I don’t get to do much romance in my career, and so it’s very, very nice at the age of 81 that I get to play scenes like that with wonderful actors like Orla Brady, who plays Laris.” 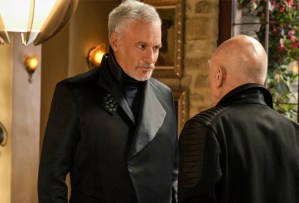 That’s not to say Picard hasn’t experienced his fair share of romance while serving as captain of the Enterprise. Past love interests include Vash (Jennifer Hetrick), an adventurous archeologist; Kamala (Famke Janssen), the metamorph who fell in love with Picard while promised to marry someone else; and Nella Daren (Wendy Hughes), the Starfleet commander who bonded with Picard over their shared love of music.

There’s also Beverly Crusher (Gates McFadden), the Enterprise’s chief medical officer and Picard’s close friend that both Stewart and Picard EP Akiva Goldsman agree is a significant past relationship. “I definitely would consider Beverly Crusher a past love,” Goldsman notes.

Even so, Picard has remained heavily guarded over his heart, which Stewart attributes to his rough upbringing on Earth.

“As a child being brought up in a difficult home, he misunderstood what the situation really was. I think that left a wound on him which never really healed and made him doubt his ability to establish a really close intimate relationship with certainly a romantic nature,” Stewart explains. “He loved his Enterprise crew, and it has often been said that was his family, but we are seeing the notion of family being extended a little bit further.”

Season 2’s unexpected new quest comes courtesy of Q, the omniscient shapeshifter who delights in tormenting Picard with maddening philosophical tests. For John de Lancie, who reprises his role as the fan-favorite character, it’s important that Picard takes the time to answer some of these lingering questions about himself while he’s still around to do so.

“He’s getting old,” de Lancie says. “There isn’t much time, and if you don’t handle these questions and deal with them now, you will not, and there’s nothing worse than an unsettled death.”

Furthermore, it’s crucial that Picard look inward not only for himself, but also “for me [as Q],” de Lancie adds. “Him examining himself has a direct effect on me.”

With upcoming episodes of Picard exploring new corners of the titular character’s mind and heart, it makes sense that Star Trek: The Next Generation favorites like his longtime tormentor Q and Guinan (Whoopi Goldberg), one of Picard’s dearest and oldest friends, help guide him along this intimate journey. The Borg Queen (now played by Annie Wersching) is also set to appear — undoubtedly due to his lengthy history with the hive-minded collective.

“We wanted the people who know him the best, which would be Q and Guinan, and all of those people who, with their particular kind of Star Trek magic, could send us into a world one way or another where we could see that past,” Goldsman shares.

When it comes to the possibility of seeing more familiar Next Generation characters entering the fold this season, the Picard EP would only divulge that “there is a plan.”