“The Voice,” which is “La Brea’s” lead-in, slipped just one-tenth of a point from last week. As a result, regular Tuesday winner NBC ended up in a primetime-ratings tie with ABC.

NBC and ABC tied for first in ratings, both with a 0.5 in the advertiser-coveted 18-49 demographic. NBC was first in total viewers with an average of 4.5 million, according to preliminary numbers. ABC was fourth with 2.1 million. 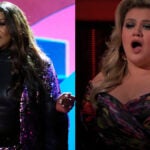 “The Voice” was Tuesday’s top show, despite slipping week to week. Of course, “The Bachelorette,” which was close behind the NBC singing competition in the key demo, had to sustain its performance over two hours — not just one. 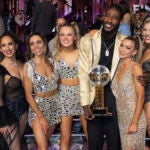 CBS was third in ratings with a 0.4 and second in total viewers with 3.9 million, airing all reruns.

Fox was fourth in ratings with a 0.3 and third in total viewers with 2.2 million. “The Resident” at 8 managed a 0.3 rating and 2.9 million total viewers. A repeat followed.

We do not have early Nielsen numbers for Spanish-language networks Univision and Telemundo.