Celebrity Catchphrase returned to ITV with an all-new episode this evening as Countdown’s resident maths whizz Rachel Riley faced off against Tim Vine and Dion Dublin. Despite noting at the top of the show she had “nothing to gain” on the programme as the weight of expectation fell on her shoulders, Rachel got off to a cracking start, besting her fellow celebs in a number of rounds. However, when it came to the bonus board of the second round, it’s fair to say host Stephen Mulhern wasn’t expecting the innuendo she suggested.

Rachel stormed ahead of her competitors in the earlier rounds, racking up four figures in round one while Dion was yet to answer an answer correctly.

And the Countdown star continued the form into round two, taking several cracks at the show’s bonus board.

Rachel had just answered one of the puzzles correctly with “cheapskate” and was subsequently faced with a partly covered up catchphrase to try and decipher.

With just five squares out of nine cleared, Rachel, Stephen and the audience at home could only make out a glimpse at a can of squirty cream. 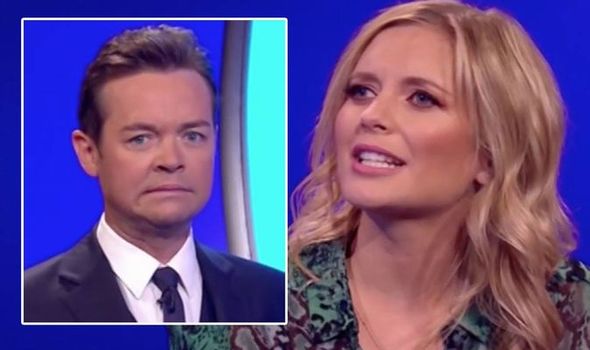 Keen to still submit a guess, Rachel took a punt and said to Stephen: “Angry squirter.”

Unsurprisingly, the answer was incorrect but the x-rated innuendo promptly stopped Stephen in his tracks.

The ITV host was lost for words as he stood in silence and laughter filled the studio.

Eventually, Stephen did regain composure as a red-faced Rachel realised the connotations of her x-rated answer.

Rachel didn’t let the innuendo derail her chances at winning, however, as she continued to impress.

So much so, Stephen was keen to call her out on her hesitation at the beginning of the show.

“Rachel, you said you weren’t gonna be any good at Catchphrase. Are you having a laugh?” he grilled the maths whizz.