Lennon looks the part: teal-tinted hair, cool tattoos, a punky sartorial sense, big headphones. As she sulks around the edges of a gallery opening on the arty side of Columbus, Ohio, she seems to fit in, until you notice… Why isn’t Lennon talking to anyone else? How come no one has said hello to her? And why is she recording the incredibly basic party chatter around her instead of actually partaking in it?

Cut to a title card that, amusingly and painfully, lets us in on the surface truth of Lennon’s existence: The film is called “Poser,” and that is exactly what Lennon is. While the elevator pitch of Ori Segev and Noah Dixon’s prickly feature directorial debut is simple enough — it’s “Single White Female” set in the vibrant Columbus indie scene, with a generous dash of podcast humor — the film’s fascinating setting and a pair of breakout lead performances set it a cut above other films like it. Spiky, funny, feverish, and more than a little nail-biting, “Poser” is an auspicious debut and proof that this seemingly well-tapped sub-genre isn’t done chilling audiences just yet.

But back to Lennon. In her first starring role, Sylvie Mix turns in one hell of a performance, deftly dancing between sad and creepy, pathetic and threatening, being the hero of her own story and the villain of so many others. Lennon looks the part, that’s for sure, but that’s also the point. While we never learn much about Lennon’s life before “Poser” picks up, a pair of awkward meals with her straitlaced sister Janie (Rachel Keefe) implies that Lennon’s family life is lacking and her interest in dabbling in new personas is old hat. Her latest obsession: the indie music scene of Columbus, which she hopes to infiltrate by way of a pretty clever conceit. She’s going to start a podcast about it.

Lennon is an observer by nature, someone who likes “recording sounds,” which really means she likes spying on people. Her practice podcasts hint at her mimicry skills, complete with a flat voiceover stolen from innumerable other podcasters who have come before her (and will exist long after she’s gone). Her investigation skills are somewhat lacking — Lennon is the kind of gal who will Google “what is performance art” and run with it — but she’s got some serious follow-through. Soon, she’s at all the local shows, jabbering about how she wants to cover “the scene,” and lining up budding rock stars to “come on her podcast” and chat about whatever.

At first, no one really notices that the podcasts are never posted, even as Segev and Dixon make it clear that Lennon is recording, notating, and filing everything. But for what end? The film, written by Dixon, offers something of a slow build, introducing its audience to Lennon’s creepy quirks while also layering on the laughs thanks to a slew of uncomfortably funny podcast interviews. As Lennon slowly ingratiates herself into her beloved “scene” — is it beloved? it’s hard to figure out why Lennon wants to be part of any of this, which is not a criticism — she settles on a singular fixation. 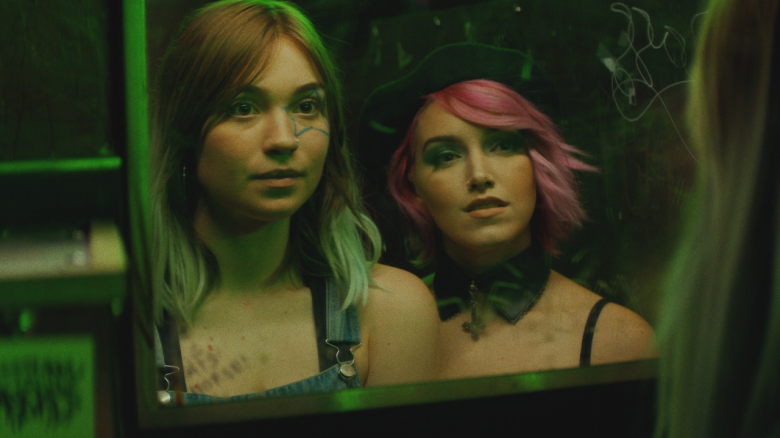 Segev and Dixon have populated their feature with a number of real-life figures from the burgeoning Columbus art scene, which not only adds a hard-won veracity, but also allows us (and Lennon) to meet Bobbi Kitten, a punk rocker playing a loosely fact-based version of herself. Like the real-life Kitten, the film’s Bobbi is the frontwoman of a fast-rising local band (Damn the Witch Siren), an adored local figure with formidable charisma and performance skills, all topped off by a mop of pink hair. No wonder Lennon eventually turns her focus on to Bobbi.

While Kitten is presumably playing a version of herself, in her very first on-screen role, she’s not at all afraid of turning in an actual performance. Like Lennon, Bobbi is a lesson in contradictions: she’s nice but a little guarded, she’s creative but she’s also prone to speaking in generalities, and she may be the only person who keys into whatever is really going on with Lennon. As Lennon gets to know Bobbi, so does the audience, with Segev and Dixon occasionally dipping into her perspective after so steadfastly presenting the world through Lennon’s skewed eyes.

It’s a gamble that mostly pays off later, and while “Poser” works up to a somewhat predictable ending, the details and ideas that get us there are fascinating and unique. Mix and Kitten are a formidable duo, both adeptly navigating tricky roles that make “Poser” such a thrilling watch. Like Lennon, it looks the part, but there’s so much more going on under the surface.

“Poser” premiered in the U.S. Narrative Competition section of the 2021 Tribeca Film Festival. It is currently seeking U.S. distribution.