Britain is scheduled to officially leave the European Union at the end of October this year after Prime Minister Theresa May requested an extension to the Brexit process when she repeatedly failed to get her withdrawal agreement through the House of Commons. Speaking on ITV’s Good Morning Britain, Piers Morgan explained that he would support Britain leaving the European Union without a deal, with Britons “sick and tired” with Brexit. He said: “Isn’t the more honest position to say, if I was a Tory candidate here, I would literally go out and say, if I won, ‘we are where we are, we are all sick and tired of this’.

“‘We have a choice as a country, we either go down another referendum for another year-and-a-half and then another one and we keep going that way’.

“‘We keep trying to argue with the EU over minutiae which they don’t want to budge on, and we are nowhere with that, that is years away as well’.

“Or, we swallow a bit of pain, take the no deal option and we work all of this out after we have actually made a damn decision and we leave.”

He added: “You are making a presumption which is made based on advice from the CBI and the usual businesses and so on. 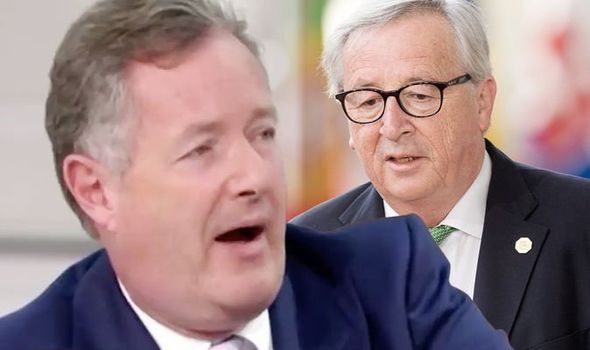 “I come back to, very boring I know, I am going to mention the euro, because I remember very clearly, the debate over the euro and you had the likes of Tony Blair, John Major, Michael Heseltine, Alastair Campbell, Peter Mandelson, Gordon Brown, everyone saying, very clearly if this country did not enter the euro, it would be a disaster. it would be a financial fiasco, we would never recover.

“We then didn’t enter the euro, and in fact, it was the best thing we never did, I don’t believe all of these experts.”

So far 13 Conservative MPs have put their names forward to take over from Prime Minister Mrs May after she announced she would step down towards the end of last month.

Just hours after the Prime Minister delivered her resignation speech on the steps of 10 Downing Street, former foreign secretary Boris Johnson insisted the UK must be prepared to walk away from the bloc without a Brexit deal.

We are where we are, we are all sick and tired of this

He said: “We will leave the EU on October 31, deal or no deal. The way to get a good deal is to prepare for a no deal.”

Over the weekend, Remain supporter and Conservative MP Sam Gyimah said he was joining the crowded field of leadership candidates to “broaden the race” – and pledged to hold a second referendum if he won.

He said: “What most of the candidates are offering is to offer no-deal and a fudge on Theresa May’s deal which has been heavily defeated.

“Parliament is deadlocked, we all know that we want to move forward, and we want to be able to bring the country together.

“So that is why I think a final say on the Brexit deal is the way to achieve that and for the Conservative Party I think what we need to be doing is putting the country first.”