Home » TV » ‘Oi get off!’ ITV This Morning in chaos as presenter ‘attacked’ by gaggle of turkeys

This Morning returned to ITV with the final instalment of the week and those watching at home tuned in to see Ruth Langsford and Eamonn Holmes present the show from the studio. Joining them on live location was consumer expert Alice Beer who was with  farmer Verity Copas and her 18,000 turkey. The segment discussed how alpacas are working hard to make sure the turkeys make it to Christmas. But during the interview, those watching at home saw her be swarmed by the gobbling animals.

“After hundreds of their turkeys were being attacked at killed by predators, we’re talking foxes here, they decided to invest in a certain type of security guard,” Eamonn introduced.

“Look at these gorgeous ladies,” Alice replied standing among hundreds of birds.

“Excuses me ladies, good morning where we are surround by 30,000 turkeys somewhere across 80 acres,” she added.

ITV viewers then saw Alice talk to the farmer about introducing alpacas onto their land to scare away the foxes and protect their turkeys. 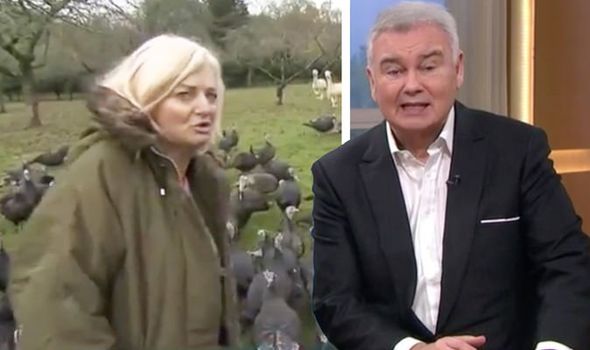 But it was during the discussion when Alice wanted to get a “bit closer” to the alpacas when she found herself unable to get out of the crowd of turkeys.

“Apparently they are really horrible if you get close to them,” the presenter said about the furry animal.

“You’d think they’re all cuddly and cute but…”

The farmer then explained how they only have male alpacas on the farm because they are the “grumpiest” and “most territorial”. 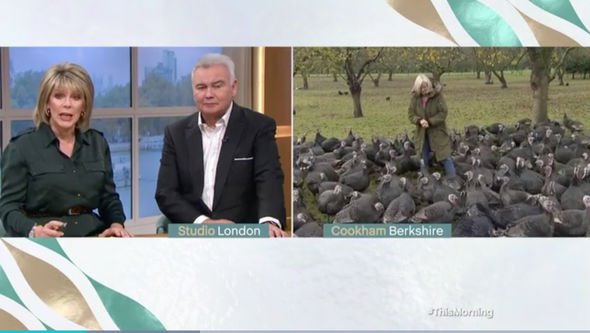 “We’re going to get a bit closer to these alpacas, but I think we might get stampeded because they’re not as cute and lovely as they look!” Alice remarked.

Alice was then issued a warning by the farmer: “This is probably as close as we want to get to them.”

“Really?” Alice replied surprised and continued to walk closer. “Come on! I’m having my Bridget Jones moment let’s get closer to the alpacas.”

“You can, but realistically we try to stand back from them and if we had a dog or fox in with us now they would naturally run towards them and scare them out of the farm,” the farmer added. 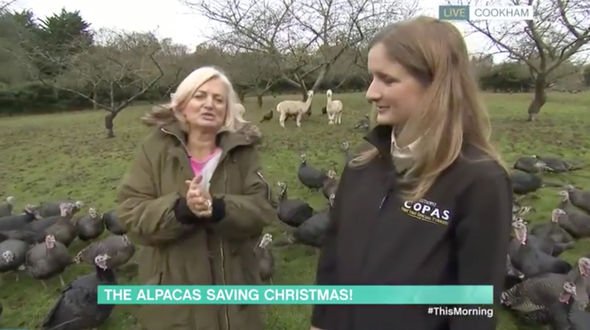 This Morning fans then saw Alice attempt to speak the language of the turkey’s and shouted: “Gobble gobble gobble!”

As their ‘gobble gobble’ got louder in response, Alice happily exclaimed: “They talk back to you!”

But some didn’t enjoy her chatting and decided to nip her while she tried to talk to the camera.

“Oi! Get off!” Alice remarked in response.

It comes after a This Morning show which aired earlier this week when Phillip Schofield was left stunned.

He and Holly Willoughby were joined by Chris Evans on the blue sofa.

The Virgin Media Radio host was eager to show the presenters his surgery wounds and dropped his trousers live on air.

This Morning airs weekdays on ITV at 10.30am.