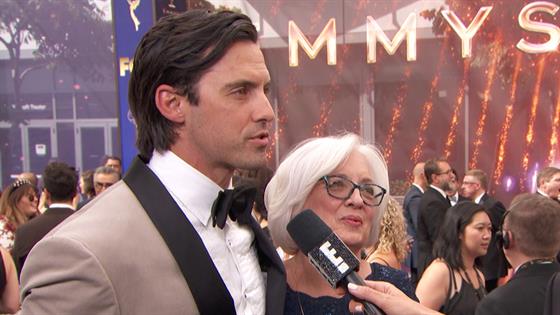 After they played hard to get for years, Milo Ventimiglia finally landed his dream dates for the 2019 Emmys: his parents!

The This Is Us star walked the red carpet at the 71st Annual Primetime Emmy Awards on Sunday with his mom and dad, Carol and Peter, with the pair also joining him for his interview with Giuliana Rancic on the purple carpet.

“They’ve declined the invite two years ago, so this is the year they said they wanted to be here,” Milo, who is nominated for Outstanding Performance By a Lead Actor in a Drama Series, before his dad admitted they had previously been “embarrassed on national television” after Jimmy Kimmel  called them out for “turning down” their son in previous years.

So why was this year different for his “very proud” parents?

“It was the right time, the right year, they’ve been excited and they’ve always been supportive of me,” Milo, 42, said, “so to show them what this show is I think an experience.”

During his chat with Giuliana, Milo revealed his life mantra—”Live in love”—is something he learned fRom his parents, and he got emotional talking about it in front of them. “My mom and dad, they’re very loving people, very supportive, raised my sisters and I with that, with the grace that they have just as human beings. I can’t look at them too much, I’ll start crying,” the nominee said. “I think it’s something we need to be more aware of, with everything kind of separating as human beings, we need to give examples of coming together and showing love. It is such a strength to show love and in many different ways.”

Speaking of Jack, the star was pretty tight-lipped about This Is Us‘ fall premiere, but he did tease, “You’re going to feel all the feels you should feel while watching the show. We’re coming back with a pretty beautiful episode.”

E! also chatted with Milo’s co-star Sterling K. Brown, who is also nominated for Outstanding Lead Actor in a Drama Series, about what fans can expect from the NBC hit’s return, including Randall and his fam’s big move to Philly.

“There are going to be some trials and tribulations that come from the move, some highs and lows,” he teased, along with a new character who will have an “interesting relationship” with Jack.

Someone who was surprised by some of the scoop he dropped? His wife Ryan Michelle Bathe, who admitted she doesn’t know anything about what’s in store on This Is Us. “Oh, I have no idea!” she said.

“I want her to experience the show with everyone else,” Sterling reasoned.

To hear what Milo was like as a child straight from his parents and to find out about a very special guest star on Ryan Michelle’s First Wives Club reboot, watch their interviews on the Emmys red carpet above.

(E! and NBC are both part of the NBCUniversal family.)