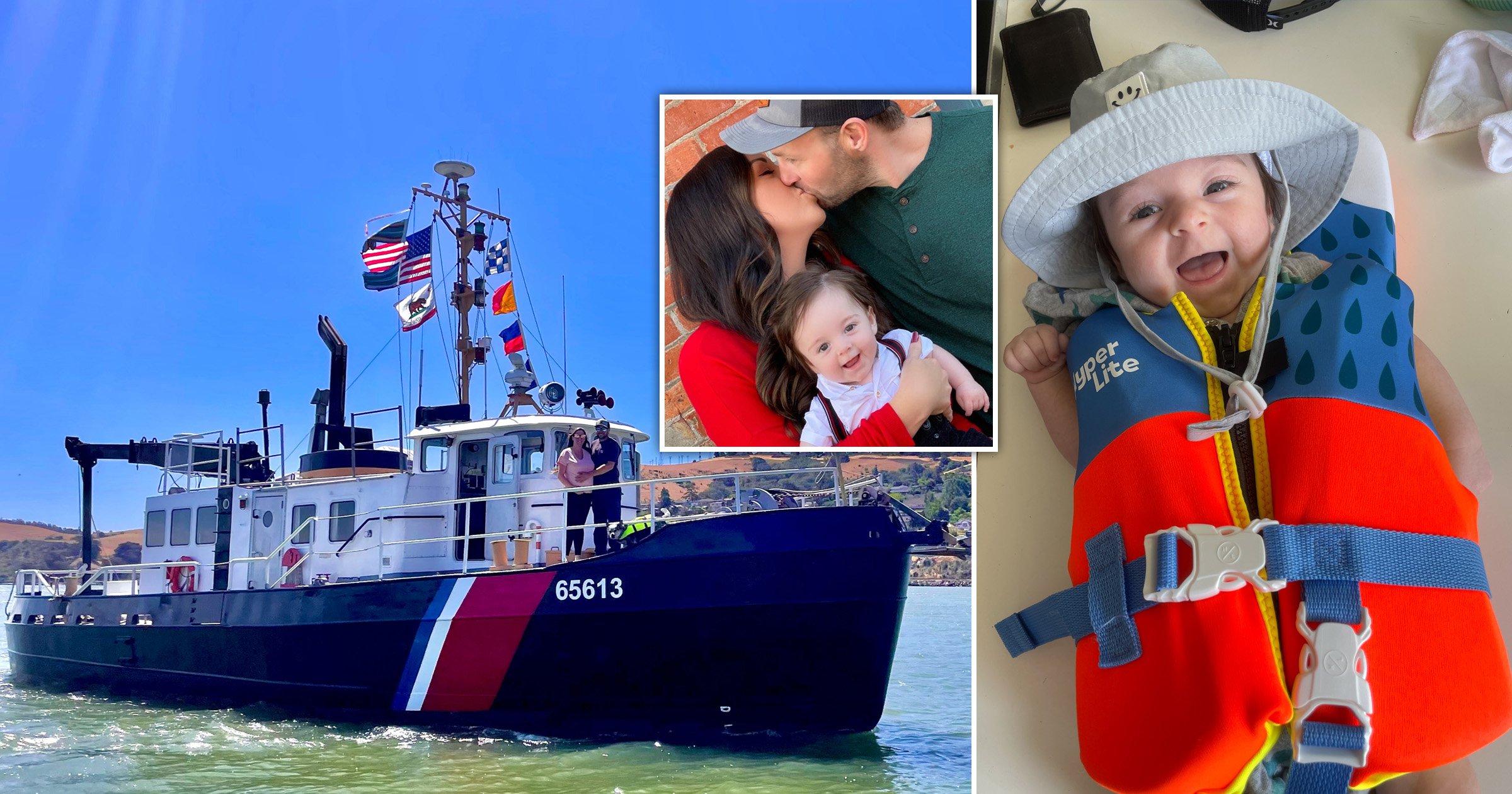 When Jason Loger, 35, bought a 65ft long decommissioned military tugboat for $35,000 on his second date with Taryn Collins, Taryn was a little shocked, to put it lightly.

You would be, wouldn’t you? Dropping tens of thousands on a coast guard ship is a bit strange. In the early stages of dating, some might even call it a red flag.

But a year later, Taryn, who was working in vet medicine at the time, moved on to that boat, with her chihuahua mix joining railroad worker Jason and his cattle dog.

Now, the couple and their baby live on the boat full-time, with what used to be the officer in charge’s room now a nursery for eight-month-old Russell.

As you’d expect, the boat needed some work to transform it into a floating family home.

Taryn, a now stay-at-home mum, said: ‘When I first saw the boat in pictures I thought it was a floating tetanus shot.

‘But once I got in there and saw Jason’s love and his passion for it and saw the ability to move on water, I fell in love with the whole idea of it.

‘We wanted to do this fun twist like it’s a home and it’s something cool on the water for people to enjoy.

‘We are able to untie our lines and change our scenery at any given moment and that’s so nice, especially with the pandemic.

‘When I met Jason, I was living in an apartment and had just moved to the area, so he kind of started to show me the boat life.

‘We get a view that people pay millions for, for a fraction of the cost.’

Taryn and Jason have spent upwards of $50,000 on routine maintenance of the boat, materials, and equipment, along with turning the crew’s quarters into their bedroom and kitting out the space with all the essentials.

But they say they’re saving hundreds of thousands of dollars by living on a boat, docked in a marina in Benicia, California, instead of a house.

‘The haul-out, dry docking and launch, inspection, sanding and painting of the underwater portion of the boat for routine maintenance was about $20K,’ said Taryn. ‘Another $30,000 was spent on materials and equipment for things like shore power transformers to be able to plug into a regular marina, paint, steelwork, a full-sized washer and dryer, flooring, HVAC repairs and equipment.

‘Jason did most of the work on his own which kept our costs low.

Since sharing their unusual dwellings on TikTok, Taryn has received some judgment from those who say the boat isn’t safe. But she has no regrets.

The mum said: ‘What part of it isn’t safe? Everything I’m doing is safe and it’s just as safe as what you would be in a house.

‘The comments are all mostly positive but then I’d get the random comment telling me it’s delusional.

‘Or somebody will say that my son will fall in the water.

‘No matter if you live in a boat or a house, you need to supervise your children, we have doors and we have brains.’

Now, the couple hopes to inspire other people to give boat living a go.

‘I wanted to show people that they can do this,’ said Taryn. ‘It’s not super expensive if you’re not afraid of water.

‘There are so many people who live on boats, and they do with their kids, and they sail around the world.

‘The pandemic threw me into this cool idea that to be stationary is so silly.

‘Now we can go out and see the world and meet people and be as secluded as you want or not as secluded.

‘A lot of people think that we’re doing something crazy and extravagant and we’re not.’

‘Monsters at Work’: Disney Has a Green New Deal with Laughter as the Energy Source