Home » TV » Louise Minchin forced to step in after Carol Kirkwood blunder: ‘She can’t hear us’

BBC Breakfast continued today and Carol Kirkwood was presenting live from Wimbledon to share the latest weather report. Carol was talking from outside the prestigious tennis venue, which, of course, had its annual contest cancelled this year due to the current coronavirus pandemic. However, Louise Minchin was forced to step in today after it became clear that Carol was dealing with some major tech issues.

Dan Walker welcomed Carol to the show this morning and it was clear that it was very blustery at Wimbledon this morning.

Carol began her report, but it quickly became clear that something was wrong as the meteorologist took her earpiece out.

She went on to explain what the UK can expect over the coming weeks and also revealed that it is the first time since World War II that Wimbledon has not gone ahead.

Carol pointed out where she and sports reporter Sally Nugent would usually be presenting from, but her earpiece was clearly giving her problems. 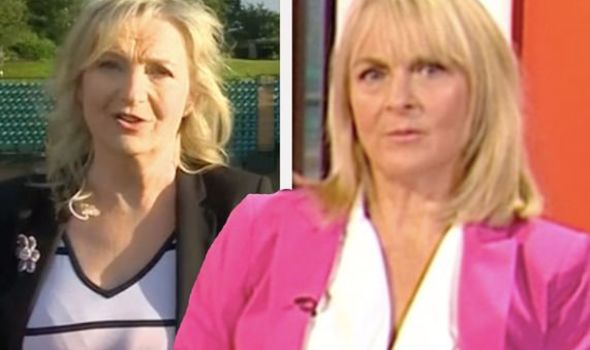 However, when it came to throwing it back to Dan and Louise in the studio, one of the hosts was forced to explain what was going on.

Louise said: “Carol, I think you may be having problems hearing us.”

The weather woman didn’t respond so Louise carried on and said: “We will come back to you a little bit later.

“I won’t expect you to answer any questions right now, but give us a wave.”