“Lodge 49” sets up a world, much like our own, where each new answer comes with a handful of new questions. The journey to find some of those answers occasionally brings its central characters across ideas and discoveries in line with mythic traditions that stretch back centuries, and there’s something almost magical in the way this show makes each of those pursuits feel relatable.

Sometimes, as an artful way of underlining the way that these lofty goals are still grounded in something that has the power to connect, the show takes its collective breath and gives one of its main players a chance to explain the world as they see it.

“We don’t shy away from giving speeches to our characters, partly because our cast can deliver. I think it’s satisfying in a moment where a character, in their own way, can distill what’s been going on. Every story needs that moment,” series creator Jim Gavin told IndieWire.

“Oftentimes, characters are distilling what they wish the world was, rather than explaining what it is. It’s usually just a hope for something better, spoken as truth,” said showrunner Peter Ocko.

Among the many other things that separate “Lodge 49” from many of its TV peers is how those wishes lead to a specific way the show approaches its own kind of faith. It’s not a faith rooted in any official tradition, but it’s one of the engines of the series that sustain it as its characters travel distant continents and go down twisty corporate rabbit holes, each of them is looking for something meaningful beyond themselves. Now with the AMC series in the middle of Season 2, that ongoing search for something to believe in is dovetailing with the idea of what we owe to each other to help make that happen.

“We’re obsessed with believers and the idea that if you believe strongly enough, you bring it into being,” Ocko said. “That’s the story of the Masons, it’s the idea of ‘getting something from nothing.’ That’s a card on our writers room wall.”

There’s painstaking work going into make sure that each of the members of the group that gives the show its title (not to mention those members’ various co-workers and assorted family) have distinct aims, that these aren’t just indistinguishable pieces of some easy common goal. In the show’s early going, as it tracked Sean “Dud” Dudley (Wyatt Russell) and his search for meaning after finding a ring buried in the Long Beach sand, one of the joys of the first season was discovering the intricate ways the lives of the people he met were all woven together. 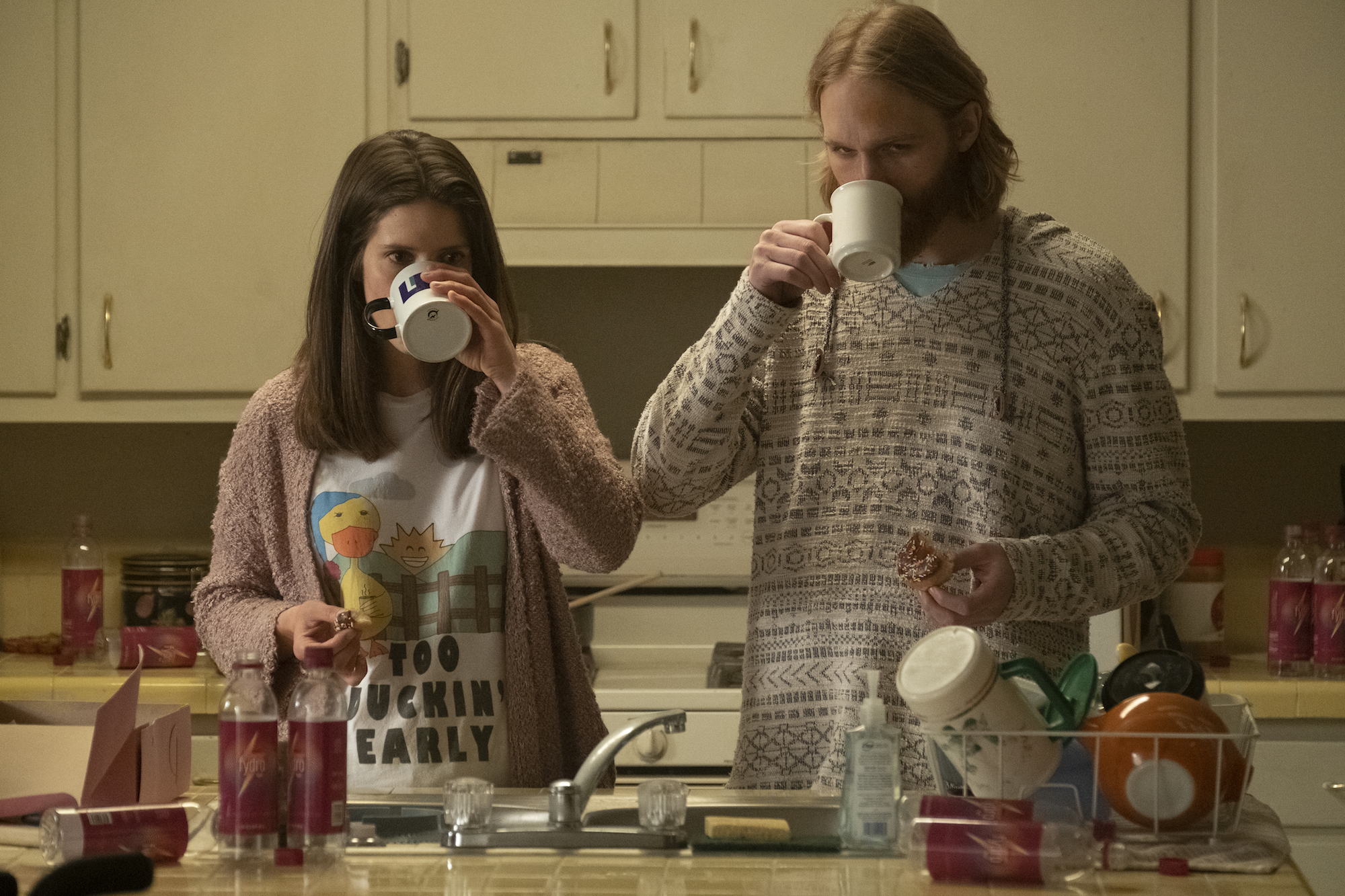 Those past loves and simmering feelings and stubborn opinions about the way this social group should persist into the future led to some on-screen divisions at the close of the show’s first 10 episodes. “This season, it’s oddly more in their own lives. Everybody’s a little like an island,” Russell said. “You can see how difficult that is and how it’s really hard to live that way when you’re just invested in your own issue and you’re not necessarily allowing other people in to help you with that. Dud is trying hard to keep everyone together. He knows that keeping everyone as a tight-knit group, that’s what’s going to get everyone through.”

Dud’s sister, Liz, is also dealing in her own way with the loss of their father. Sonya Cassidy, who plays Liz, points out that one of the things that defines the character is a feeling of stagnation that doesn’t come from a lack of ambition but is more a result of not having anyone in her life to instill that greater sense of purpose.

“The thing with Liz is that she doesn’t know what she wants to do, and I think that’s something that a lot of millennials struggle with,” Cassidy said. “She doesn’t have anyone that says, ‘I see something in you. You should go get it.’ I hope the audience can see that there’s far more in Liz than she expects, but she herself is not in a place where she can go for that.”

Rather than impose artificial setbacks and arbitrary roadblocks for these characters as they’re searching for That Elusive Something, “Lodge 49” also sustains itself by tracking people who are confronted with the idea that their belief in something is unfounded or that their intentions have been warped by some outside force.

“There’s not only true faith in something that will pay off for you, but also the idea of the con,” Ocko said. “To believe in something, you start to expect the impossible, and then mundane life comes back, but there’s some taste of that amazing thing still there.”

So for a show with as many wild diversions as “Lodge 49” joyfully engages in from time to time, there’s a fairly concise way of summing up what this show can be. Whether through the holistic healer Blaise St. John (David Pasquesi) or Connie Clark (Linda Emond), who engages in a cross-continental search for answers after a jarring health diagnosis, “Lodge 49” excels by pinpointing where these characters often turn to in time of need: each other.

“That’s the wonderful thing about this little community that gets built in this Lodge,” Pasquesi said. “They’re flawed, weird people, each in their own way. Some less weird than others. Even when there’s some animosity between people, there’s never a dismissal of them. There’s real, if not compassion, tolerance for everyone.” 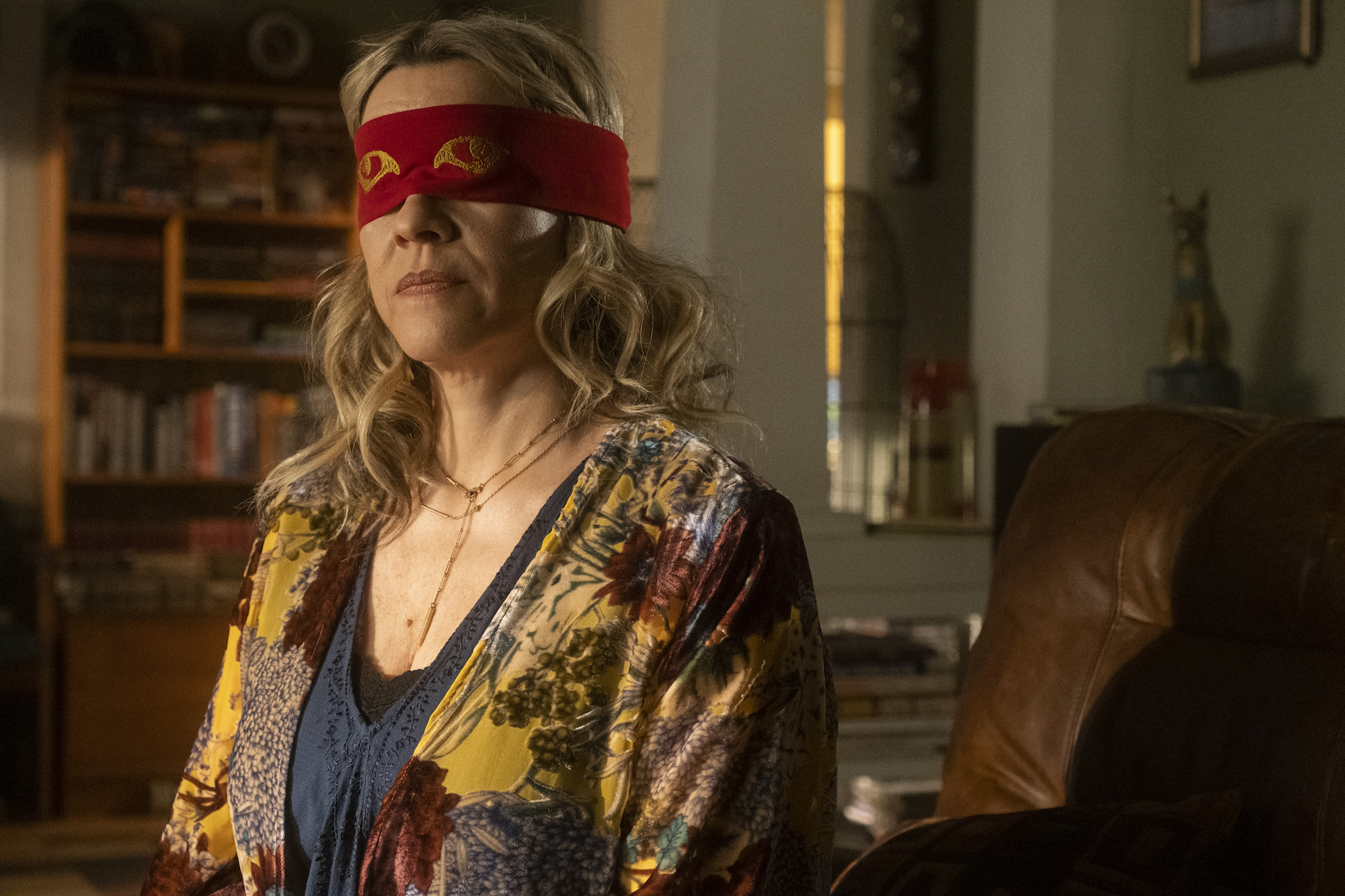 The show’s acceptance of all comers shines through in the way it presents a character like Blaise. His methods can be odd and his approaches occasionally off-kilter. But showing someone who’s tussling with the metaphysical realities of this world in an overarching search for the true nature of alchemy is an example of how these personal pursuits become instantly recognizable and more meaningful than a more external crisis could be.

“People that don’t know what they’re talking about often talk about ‘You gotta raise the stakes!’ I don’t believe that. I think the stakes are plenty high at ‘living.’ These are problems for these people, but they’re all believable problems,” Pasquesi said.

Those problems have ranged from the interpersonal to the financial to the generational, as the fates of various characters have been dramatically shifted by nature, capitalism, and the whims of individuals who often reside offscreen. Making sense of that — why these things can happen and what to do in their aftermath — is a potent, emotional throughline that runs through much of “Lodge 49.”

“I think Jim Gavin has a conscience and he’s conscious of what’s going on in the world. All of those stories deserve telling, especially the people who get lost in the middle,” Emond said. “I think we hear a lot about super powerful people, but I was genuinely moved by the fact that he was telling stories about a lot of people who are forgotten or lost or over the course of the show.”

In a way, the show offers the audience the same chance to find kindred spirits, even if those characters may be in a far-flung corner of southern California. As many of the TV behemoths trade on comfy adaptations of preexisting work or make calculated plays on viewer nostalgia, there’s something refreshing about a show than can find so much possibility in the real world.

“That is so important, for people not to feel alone with these echoes in their mind of what could be or what could have been. That’s being human, which is both exhilarating and terrifying at the same time,” Cassidy said. “Alchemy and faith beyond is one thing, but to see other human beings have to look inward and wrestle with that and figure that out is really compelling to watch. You can live vicariously as an audience member and you can also learn about yourself and feel, hopefully in a safe, exhilarating way, you’re with them and don’t feel alone with your own thoughts.”

'Below Deck Med': What Big Problem Does Captain Sandy Encounter?