Live television specials are all the rage in entertainment right now, whether fans approve or totally hate them. We just saw this with The Little Mermaid Live! on ABC, which wasn’t pre-taped.

Prior to this production, the network treated viewers to Norman Lear’s All in the Family and The Jeffersons live, a presentation spearheaded by late night talk show host, Jimmy Kimmel. Well everyone, they’re back at again and this time, Kerry Washington is on the team for some good times. 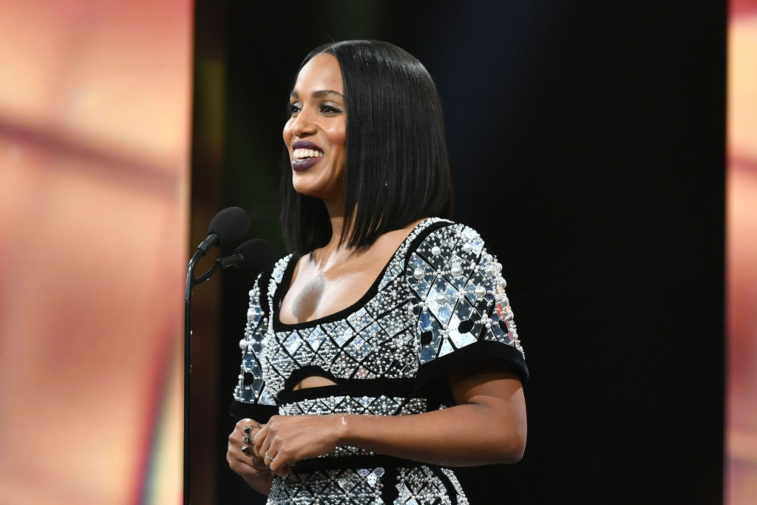 ABC bring its live programming back with ‘Good Times’

On Tuesday, ABC issued a press release announcing another round of “Live in Front of a Studio Audience” with Norman Lear’s All in the Family and Good Times. The event will once again recreate an old episode of each series in a live format. The network shared that its May presentation and August encore drew more than 20 million viewers.

Good Times originally starred John Amos, Esther Rolle,Jimmy Walker, Bern Nadette Stanis, and Ralph Walker, and aired from 1974-1979. 2019marks the 45th anniversary of the show which centered on the Evansfamily and their life in a Chicago housing project. Like All in the Familyand The Jeffersons, Good Times means a lot to fans nostalgically.

“The holiday season is the perfect time for families to come together and enjoy another ‘Live in Front of a Studio Audience’ special on ABC. Only Jimmy and Norman can top what they accomplished the first time. From the superstar talent to the unforgettable music and the richly deserved Emmy win, their collective vision has introduced a whole new generation of people to these groundbreaking and timeless stories – and now with ‘Good Times’ as part of the lineup, this will surely be another can’t-miss television event.”

Washington will serve as an executive producer

Kimmel is returning to produce alongside series creator Norman Lear, Will Ferrell, Brent Miller, Justin Theroux, and Kerry Washington. Washington played the role of Helen Willis in the live version of The Jeffersons and just signed on as part of the executive team for this new outing.

Lear helped developed Good Times, which was created by Eric Monte and Mike Evans, and this live TV special is being produced in partnership with Sony Pictures Television. Both Lear and Kimmel are looking forward to the new program:

“Being a part of NormanLear’s world was a career highlight; and working with great actors on thesegreat shows was so much fun, we couldn’t resist tackling a holiday episode of‘All in the Family’ and one of my favorites, ‘Good Times,’” Kimmel stated.

“I don’t know which is greater – bringing back ‘Good Times’ or co-hosting with Jimmy Kimmel?” said Lear.

Last night I had the thrill and honor to present the Britannia Award for Excellence in Television to the great Norman Lear. A true engineer of hilarity and innovator for shared humanity. Thank you @thenormanlear and congratulations on this VERY deserved award 🥰

When is the special due to air?

Good Times/All in the Family is due to premiere thiswinter on Dec. 18 on ABC. In addition to this latest holiday edition of Livein Front of a Studio Audience, viewers can look forward to another installmentset to hit the small screen in spring 2020.

The cast list has not yet been announced, but it’s possible that fans will see the return of Woody Harrelson, Marisa Tomei, Ellie Kemper, and Ike Barinholtz for All in the Family. It’s unclear whether Washington will play in Good Times.