Home » TV » 'Jeopardy!': Alex Trebek Told a Contestant About His Bucket List and It's Actually Awesome 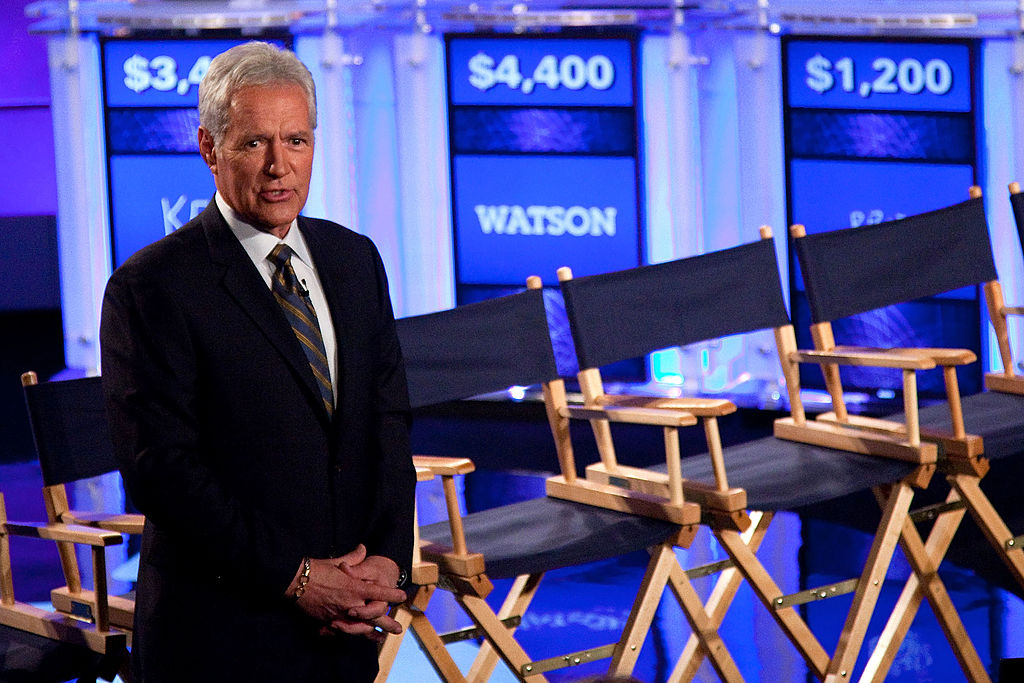 The 79-year-old quiz show host has actually been working on it for quite a while and, in light of his recent cancer diagnosis, Jeopardy! fans are rooting for him to enjoy every item on his list.

Trebek appeared in the film ‘The Bucket List’ – but didn’t

In 2007, Trebek filmed a scene for The Bucket List, starring Jack Nicholson and Morgan Freeman. In the scene, Freeman’s character, Carter Chambers, dies on the Jeopardy! set. Unfortunately, Trebek’s scene didn’t make it into the final movie.

The #JeopardyGOAT encore event starts on May 4. See you then!

“They came to the studio, and they shot Morgan Freeman’s death scene in our studio,” the Canadian native told the Television Critics Association winter press tour in 2020. “He was a contestant on Jeopardy which had been his lifelong ambition, and he died on our set. So then when I went to see the movie, he didn’t die on our set. He never even appeared on Jeopardy. He died at home in his bedroom. So that disappointed me. I wound up on the cutting room floor.”

“That disappointed me, to end up on the cutting room floor. [But] every time that movie is shown… I receive a nice residual.”

On last night’s episode of Jeopardy!, player Tonya Schaan shared during contestant interviews after the first commercial break, that she has traveled to Angkor Wat, a vast temple complex in Cambodia. At that revelation, Trebek replied that he has always wanted to see the sunrise at that location and that, in fact, it’s on his bucket list.

Knowing what the host of the show has been through in the past year after his cancer diagnosis, his mention of a bucket list made it especially poignant.

That moment when your Jeopardy! response is only "sorta" correct. 😂

As it turns out, according to website SmarterTravel, it sounds like the Los Angeles native has been working on his list for a while and talked about the travel spots he’s longing to see.

In 2017, Trebek told the site of his desire to visit “Iguazu Falls — that’s inland. The Amazon has always interested me because I’ve had this long desire to get to Manaus, for some reason, and Manaus is a fascinating city. It had the first opera house in South America, 200 years ago, and that’s on my bucket list.”

“Lhasa, in Tibet, is also very much on my list, and I almost did it this past year with National Geographic.”

The father of three then discussed the location that contestant Schaan mentioned – Angkor Wat. “I missed out two years ago — we sent our Clue Crew to Cambodia and Vietnam and Laos, and I didn’t get to Angkor Wat, which is on my bucket list also.”

The host reflected on his legacy

In his conversation with the Television Critics Association, Trebek touched on the legacy he hopes he is defining through his work on the classic question-and-answer show.

“I hope I have been an influence on the benefits of emphasizing the importance of knowledge,” he said. “It enriches you and makes you a better human being and a more understanding human being.”

After almost forty years on Jeopardy!, it’s clear Trebek has already achieved this goal through his own love for knowledge and curiosity for learning.

RELATED: ‘Jeopardy!’ Is Running Out of Original Episodes Due to the Pandemic – The Final One Is Coming Up Soon

Coronation Street stars raking in thousands after quitting the cobbles

Legacies season 2, episode 3 promo: What will happen next?