Holly Willoughby and Phillip Schofield are no strangers to causing drama on This Morning, as the hugely-popular presenting duo are used to taking the mickey out of each other and getting into hilarious scrapes through the various segments.

Today the latest drama unfolded when the ITV hosts were gifted with Love Island suitcases, both embroidered with their names.

Getting incredibly excited about her new possession, a thrilled Holly, 38, ended up smashing the silver luggage case into Phillip’s leg.

“Oooow!” Phillip cried, as an embarrassed Holly tried to apologise for the awkward slip.

Putting his arm around his colleague and long-time friend, Phillip gently scolded: “Do you want to carry on being professional now or what?”

Attempting to read the cues, Holly continued to stumble and she admitted: “Oh I’ve gone a bit funny after that.”

“I’ve never seen a suitcase set anyone so off-track so much!” Phillip declared.

“Well it is a Love Island suitcase,” Holly replied immediately, and Phillip became excited about the potential of taking their new items away on holiday.

“I hope that in the summer you and I are in the airport at the same time,” he giggled.

Later on in the show, former Love Island stars Kem Cetinay and Montana Brown were on-hand to discuss the latest series which debuted last night. 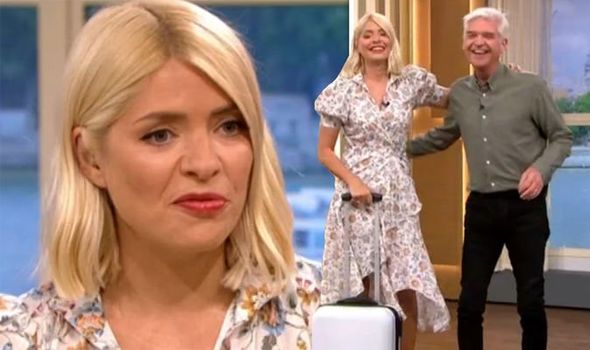 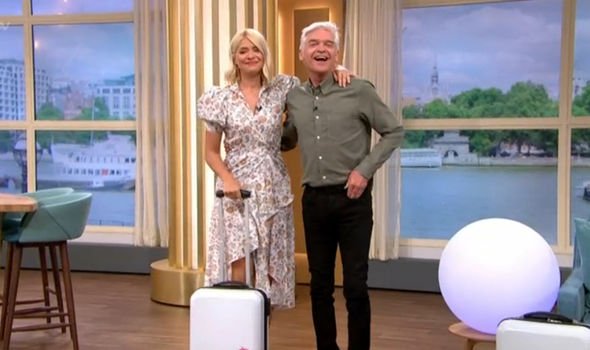 Do you want to carry on being professional now or what?

As the chat came to an end, Kem suddenly declared: “Oh and we got you a present!” before presenting the hosts with their own ITV2 series water bottle.

“I’ve got a water bottle from every series now!” an excited Phillip, 57, shared. “I’ve been using mine [recently]. We’ve got suitcases as well.”

“I’ve never seen anyone get so excited about a suitcase!” Montana then cried.

Holly insisted she would try and act “cool” around the water bottle.

But Phillip again jibed Holly hadn’t been able to act “cool” around the suitcase. 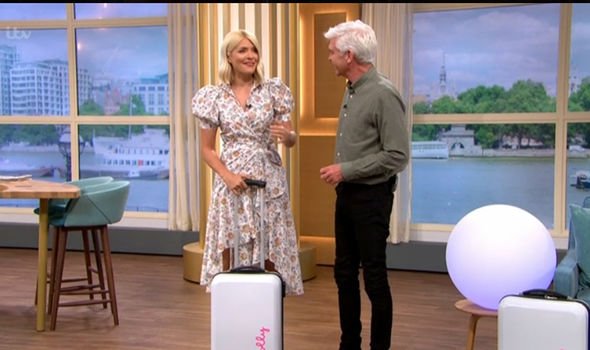 Also on today’s edition of the show, Phillip began grilling The Wanted singer Max George, trying to clear up the rumours he and the Duchess of Sussex, Meghan Markle, had exchanged romantic texts in the past.

The guest vehemently denied the claims, insisting “there was nothing to them”.

This Morning continues weekdays at 10.30am on ITV.