Susanna Reid and Bill Turnbull welcomed Bill Bailey onto Good Morning Britain on Tuesday morning to talk about the Eurovision Song Contest. After the UK came in last place in Saturday’s grand final, fans took to social media to urge the comedian to represent the nation next year. While chatting on the ITV morning show, Bill confessed he has applied for Eurovision before but was turned down.

Bill explained what he thought the UK would need to do better in the international singing competition: “There’s something that we really need to kind of channel.

“Even if it’s a bit over the top, a bit eccentric, which is celebrating what being British is about. I think that’s something that’s been lacking.

“A few years ago I sent in an entry to Eurovision and it was a kind of spoof eco anthem in the style of Dad’s Army.

“And the BBC said ‘It’s too silly. Right we can’t have that’ and I just thought yeah but all this taking it seriously that’s not going well either is it?” Bill concluded. 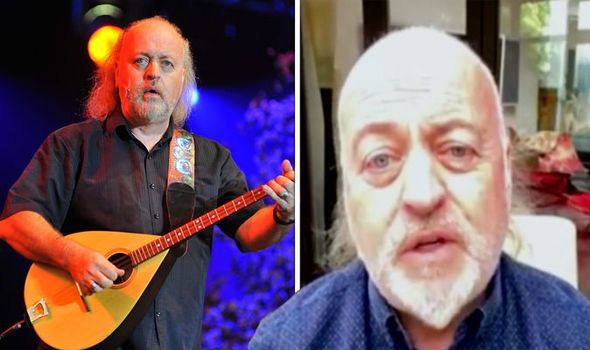 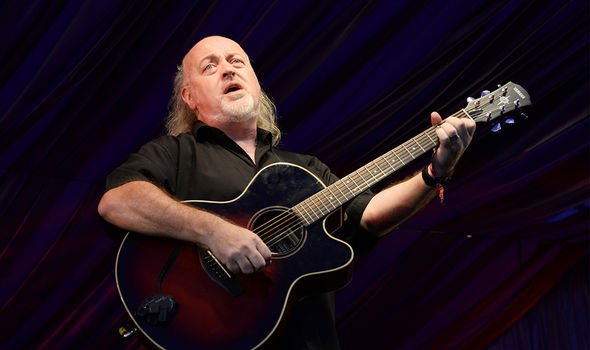 Susanna encouraged the comedian to give it another go, saying: “Dust off the eco anthem and send it in again because I think we’re kind of desperate aren’t we?”

When asked if he had any ideas for new Eurovision tracks, Bill said: “There’s always something percolating, a song, a rock song.

“Something that celebrates, you know, maybe we have a giant badger I don’t know.

“I don’t know what it is but, we’re not taking it seriously enough and sort of taking it too seriously if you see what I mean? We’ve got it the wrong way around,” he explained. 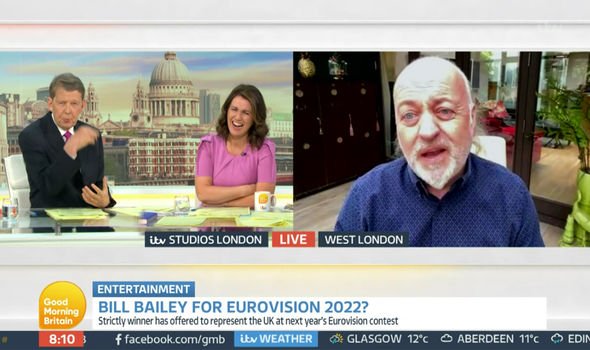 Bill continued: “We’re focused on the performance, on the kind of style of it, the visuals of it.

“Make it into a huge big celebration of Britishness that sends it up a bit as well and with some great hooks.

“Maybe some guitar, maybe some cow bells, there’s not enough car horns in it I don’t think,” the comedian added.

Bill put his name forward for the international singing competition again this week after the UK found itself in last place.

The 2021 grand final of Eurovision the UK’s James Newman received a total of zero points.

This marks the fifth time the UK has finished last, and only the second time with a nil points.

It was instead Italy’s Måneskin who were crowned the winners this year, which marked the 65th anniversary of the Eurovision Song Contest.

The group took home the trophy at the competition in Rotterdam after gaining a huge score of 524 points with their rock track Zitti E Buoni.

After seeing the big loss for the UK, Bill took to Twitter to offer his musical services for next year’s contest.

There was lots of excitement surrounding the competition this year as fans had to wait longer than usual for the event.

There was a two year gap before last week’s contest after the 2020 competition was cancelled because of the Coronavirus pandemic.

As per Eurovision tradition, next year’s event will be hosted by the winning nation Italy.

When was actor Russell Tovey in Celebrity Bake Off? Who did the Being Human star play in Gavin & Stacey?