Home » TV » Interview: Anne-Marie Duff compares the crisis management of the pandemic with 'The Salisbury Poisonings' 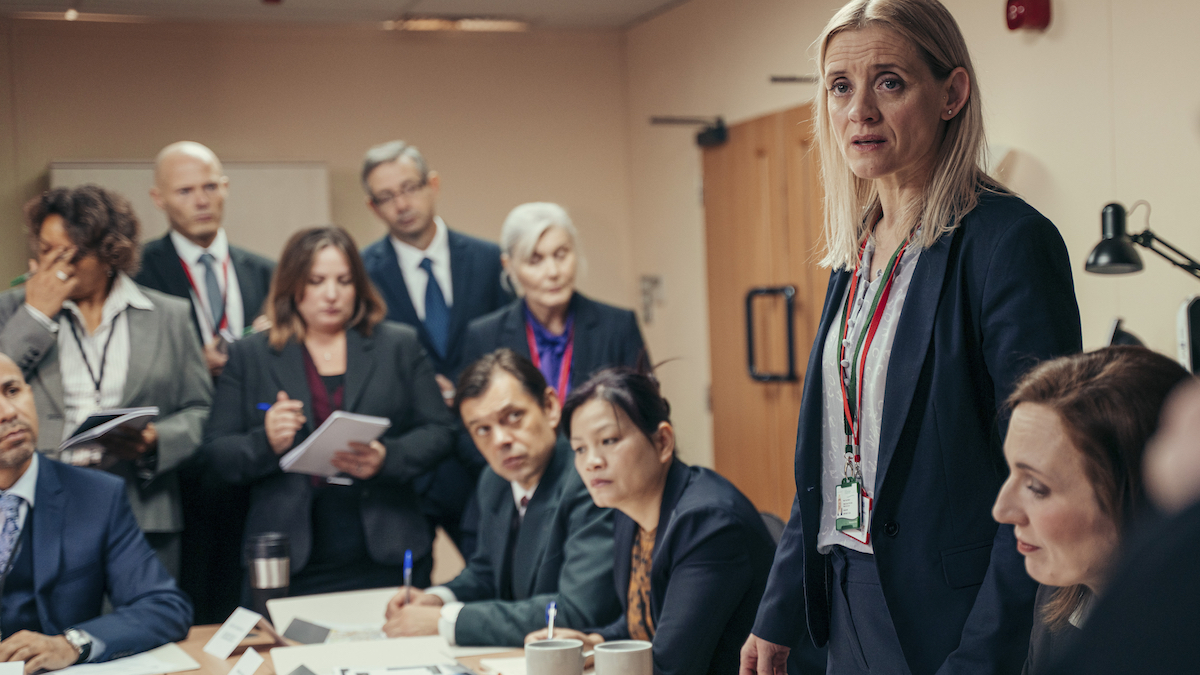 If you’re in desperate need of something uplifting concerning the coronavirus, we’d suggest heading over to AMC+ as they begin streaming The Salisbury Poisonings, a dramatization of the real-life crisis that shook the Wiltshire towns of Salisbury and Amesbury, back in the middle of 2018. Maybe you heard of it, or maybe it was drowned out by the World Cup in Russia, Donald Trump and Michael Cohen, or Bill Cosby going to jail.

An assassination attempt was made on Russian double agent Sergei Skripal and his daughter Julia when they were exposed to a deadly nerve agent called Novichok, a lethal synthetic weapon where a half a teaspoon can kill 15,000 people. Unbeknownst to the Skripals, they’ve spread it across multiple sites and to other people, including lead investigating officer, Nick Bailey (Rare Spall).

The Director of  Public Health and Safety for the county of Wiltshire, Tracy Daszkiewicz (Anne-Marie Duff), suddenly finds herself leading the response to a deadly crisis, needing to navigate uncharted waters.

Originally aired on BBC One this past June, The Salisbury Poisonings comes to American audiences in a four-part event on AMC+ streaming today, October 1, and brings to light the heroes of this catastrophe and the tragic collateral damage of the spy game.

M&C: Contextualizing what we’re dealing with today, did The Salisbury Poisonings take on a different meaning or feeling now that the UK and the whole world is dealing with a pandemic?

Ann-Marie Duff: Absolutely. We broadcasted during the UK full-on lockdown. We were nervous about it, and there was some debate as to whether we should wait or delay it for later. But it worked in our favor. We have a real connection to all the iconography within it, all of the experience that you’re feeling like you’re in the eye of the storm and can’t see your way out of it.

We’re leaning on all of the amazing people on the ground who do all the work for us. It’s very gentle, even though it’s a real thriller, there’s something very gentle and kind about the nature of storytelling that people really connected with it in a very profound way. 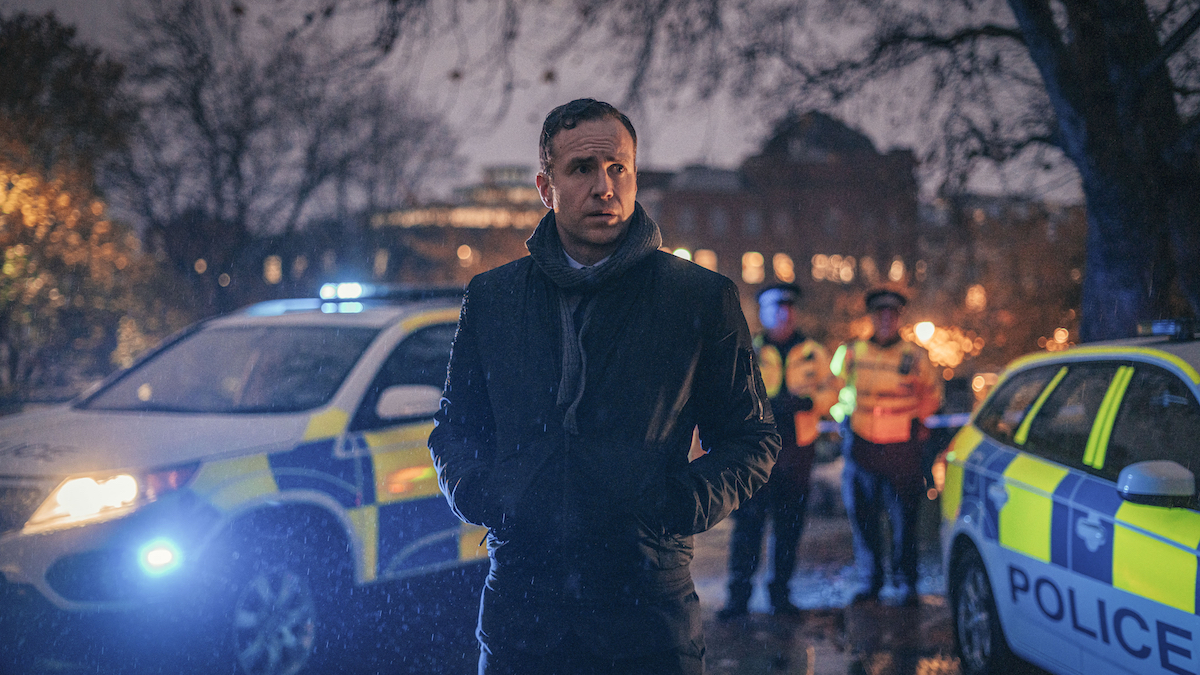 M&C: Do you think the series reminded viewers in the UK that this was a real panic, and lockdown was necessary to prevent a more catastrophic event?

AMD: Yeah, it’s great, innit? I’d never heard of the term lockdown before I said it in The Salisbury Poisonings, and now everyone is inside of one. It reminds us, as you just said, that we do move through the terrible fires and storms, and we come out of the other side. Because we do.

Even if it feels like we never will right now, it’s quite reassuring to see people go through something and there to be a conclusion, to feel like there’s a sense of tomorrow.  You guys [in America] are going through an extraordinary amount of stuff at the moment, so my heart really goes out to you.

The feeling here [in the UK] is that people are starting to become very weary now and feel quite blue. The novelty of us all supporting each other, coming together, has gone away a bit because it was feeling quite relentless. It’s quite nice to watch people being heroic and finding a way out. It reassures us that there are extraordinary people in the world, who seem really ordinary but are really kick ass.

M&C: Tracy goes through a massive ordeal in leading the response team and, after a few months, appears to be successful, but there’s a second wave. You had to show a cumulative effect in your performance, didn’t you?

AMD:  Yeah. That’s true. That is life, though, isn’t it? It’s like having kids. Just when you think everything’s fine, someone pulls the rug out from under you again. Just when you think you have nothing left, there’s just a bit more in the tank to get you through something.

M&C: What’s the feeling of the UK after this aired, where in a pandemic, it feels like a lot is being asked of us, but remember Salisbury?  Maybe we should listen.

AMD: Yeah, I know what you mean. Salisbury only affected one small city, but people don’t make that leap as much. Perhaps when they were watching the drama but not much anymore. We’d like to think that as a species, one of these things unify us. But that’s the question for the kingdom, isn’t it right now? How can it connect us again? How can it stop us from using it as an excuse to divide. We’ve got a ways to go, but we have to try, I guess. 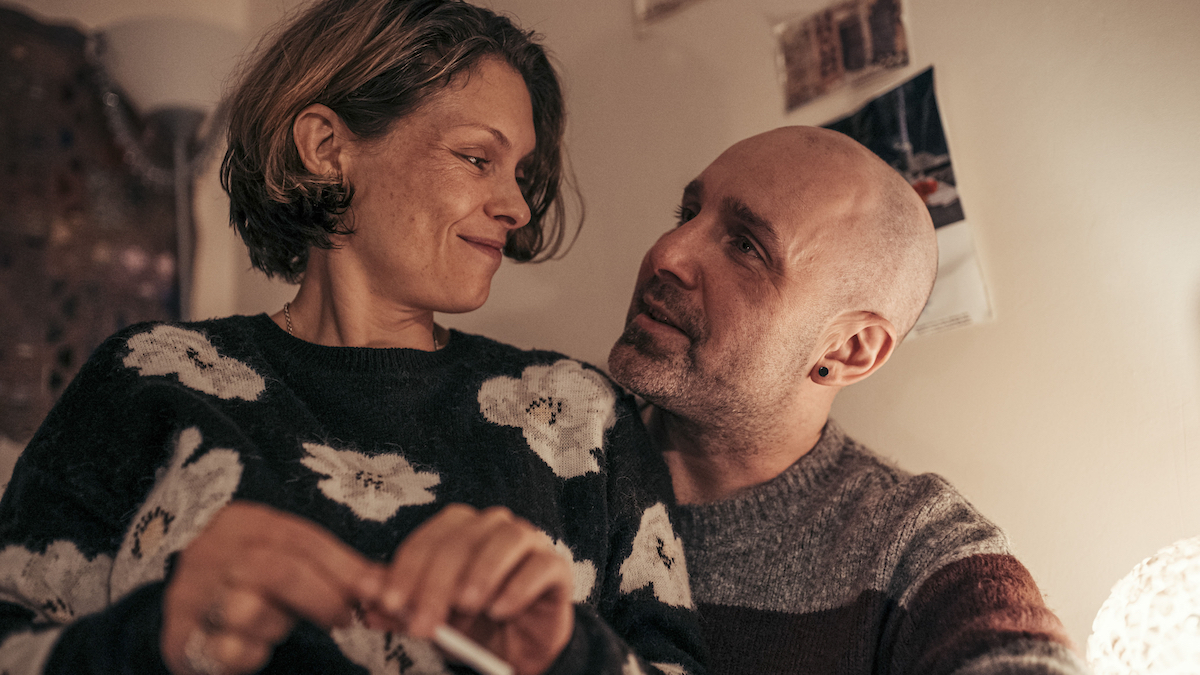 M&C: It’s easy to google names and wonder what happened to them, but it doesn’t give you the depth of the full experience. The  Salisbury Poisonings does that and humanizes the ordinary people doing these extraordinary things. What do you think about being able to give that detail of what these people went through?

AMD:  I think that’s true. Culturally, for a good while now, we have been bombarded with so much news and information all the time. It’s very easy to forget that a statistic is a human being or that a story is somebody with nerve endings. It always feels amazing as an actor when you’re inside a story like that. You get to testify for somebody, to bring their story to life.

I think that’s what we crave as human beings as well– watching what experience does to normal people. How it affects us? How we found out or for them? And I think we did that very well in this production, we were all very careful to be considerate, kind, and respectful to the people we were playing. We wanted to be as authentic as possible but still remembering that everyone affected by it, apart from Dawn Sturgess, is still living and breathing.

People aren’t statistics. They’re more than a Wikipedia page, or a Google search, so it takes us away from all of that weird objectivity that we can’t be sure of. We don’t want to lean into, but it’s just so easy, to not talk to somebody, to message them. You have to look somebody in the eye.

That’s the power of television. In many ways, that’s even more powerful than cinema. You’re inside somebody’s comfort zone, and you’re sharing with them the pain and joy of somebody’s life. It reassures people and makes them go, “We too have pain and joy. Thank god we’re all the same.”

M&C Darren Boyd’s character Supt. Dave Minty tried to console Tracy, who is grieving for those affected. But he tells her to acknowledge the good she’s done. We internalize so much when we’re traumatized that we don’t see the big victories; we don’t even consider them small victories because it’s overwhelmed by the pain.

AMD: The kind of work that people like that do, it draws a certain spirit that doesn’t glorify it. The people that walk into buildings that are on fire or people who save people’s lives are not looking for trophies. The trophy is the job. It can breathe a huge level of modesty, weight, and responsibility, can’t it?

I know Tracy feels desperately responsible for all the people she’s involved with, even though she’s moved on to another job. She’s still in contact with lots of those people, so it’s a very curious mindset that moves towards that line of work. That’s why they’re awesome I guess, right?

We read the bad news and forget that for every bad thing that happens, a thousand amazing, brilliant things happen, just generally. There’s something about saying, “I’m a good person, if I don’t say, well, I got this right.” It’s a shame we can’t congratulate ourselves. Everybody keeps telling Tracy she’s amazing, so maybe she’ll hear it one day. 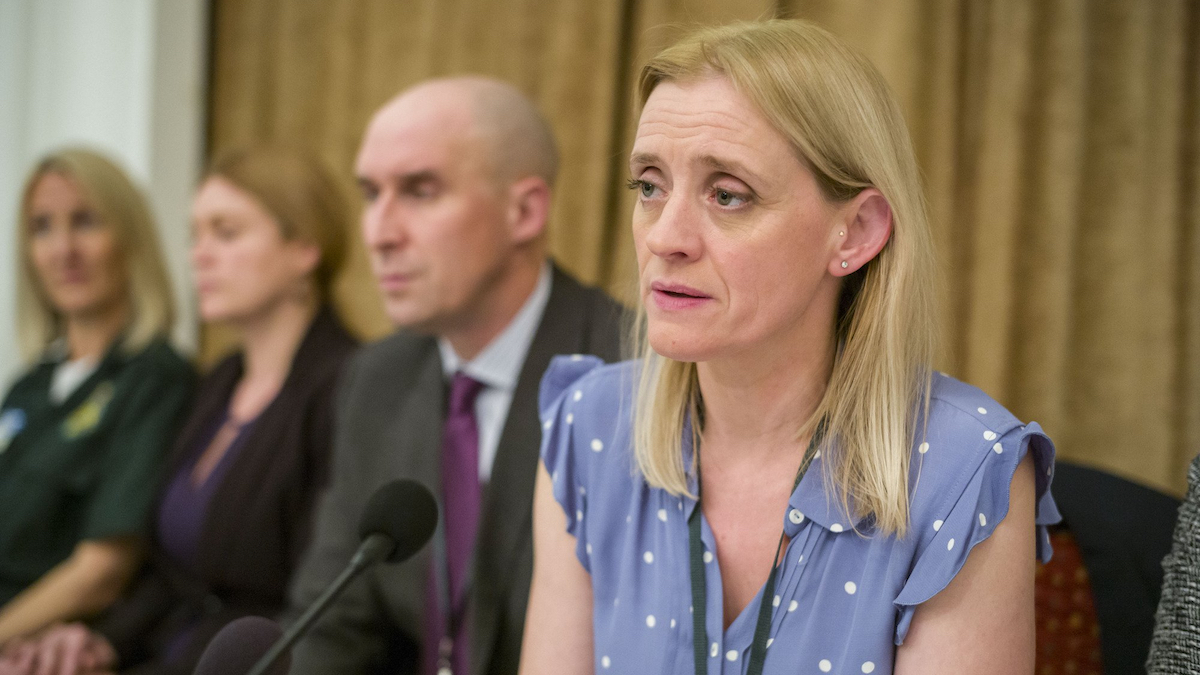 M&C: In the fourth and final episode, we see the post-traumatic effects take hold. Is there some kind of catharsis or relief in seeing that while the ordeal is over, people feel residual effects, aftershocks of the trauma?

AMD: I think it reminds the world looking in that we are affected by s**t; we don’t just move on. People are affected by huge things that happen to them, and that’s alright. There’s this weird attitude of c’mon, move on, I shouldn’t feel like this, I should be okay now, I shouldn’t be grieving anymore.

But that’s not true. It takes the time it takes, and there’s always the residue of something. It was a huuuuge event, which could have been insanely catastrophic in body count. It’s bound to leave them all shaken.

M&C: What was the biggest challenge in portraying Tracy Daszkiewicz?

AMD: The day she came on set [laughs]. I was making a cup of tea in a kitchen scene, and she was there, and it was the most surreal thing. I was wearing clothes she would wear, and she was there with her real son. I never experienced that before.

It was kind of completely terrifying, like this weird Harry Potter mirror [laughing]. Who was the real Tracy? Her son was looking for his mom and came up to me and said, “Hey, have you seen the real Tracy?”  [laughs] My god, if that doesn’t put an actor in their place, I don’t know what does.

M&C: Did she give you anything that you used in your performance?

AMD: The thing she gave me was her time, which she gave me before filming. We spent some time together and hung out. That was the gift, really. I got to see who she sort of is. You don’t want to do some weird impersonation, but you want to try and capture their spirit.

M&C: Can we hope to see you in more Sex Education?

AMD: Ha-ha-yeah! We’re currently filming Sex-Ed at the moment. I can’t believe we’re back at work, because everything halted here. Filming really only started happening in the last month, I guess. It’s great to be back working, and the scripts are really good fun again, and I think everyone will love them.

'Hunters': Did the Government Really Bring a Bunch of Nazis to America in 'Operation Paperclip'?