Home » TV » I’m A Celeb 2021: The adorable dogs who got contestants through lockdown 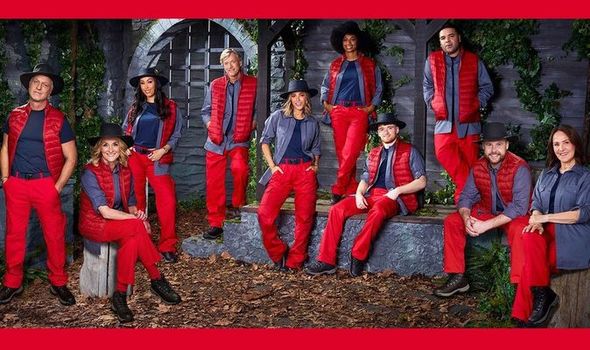 Emmerdale soap stars, singers and Olympic champions have all been heading to Gwrych Castle in North Wales, ahead of the reality show airing on November 21. And while many won’t be fans of the creepy crawlies lurking in the castle walls, some of the contestants are actually huge animal lovers, and their beloved pets will be watching from the comfort of the empty spot on the sofa. Some have even credited their dogs with helping them through the pandemic, which is something a lot of viewers will be able to relate to this year. Here’s whose canine companions will be voting for them in the I’m A Celeb castle this year.

Former BBC Breakfast presenter Louise has credited her loyal Labradors with helping her get through lockdown.

The 53-year-old presenter has a yellow lab, called Waffle – who is around nine years old – and three-year-old Ruby.

The presenter often shares snaps of her lovable pups, and has enjoyed taking them out for walks throughout the pandemic.

She captioned one snap of Waffle: “#100days of lockdown and what image captures your experience? For me this is what has helped, running, sunshine, and my loyal training partner Waffle.”

And Ruby has loved lockdown, having everyone at home and helping Louise with home working.

She added: “She regularly helps me check my emails which is not always helpful.

Ex-Strictly Come Dancing choreographer Arlene is set to be I’m A Celeb’s oldest ever contestant, at the age of 78.

Earlier this month, she was spotted staying in a rural hideout alongside husband Angus Ion, and her little crossbreed Freddie, ahead of the show starting, The Daily Mail reported.

The Prestwich-born choreographer got her puppy in March 2018, naming the female dog Freddie, who is besotted with Arlene’s husband, Angus.

On National Puppy Day, she shared a throwback image of the tiny terrier, and wrote: “Tiny Freddie the day she came home. My partner Angus has been her favourite person ever since.”

Freddie also has a feline sibling, called Romeo, who often share a ‘goodnight kiss’ together, according to Arlene.

The Saturdays singer Frankie introduced her 1.3million Instagram followers to Maltipoo, Turbo, in January this year, after ‘keeping him to herself’ for weeks.

The Maltese-poodle mix puppy tried a myriad of names before the Loose Women panellist and her family, including sons Parker and Carter, and husband Wayne, settled on Turbo.

Captioning the adorable photos, she wrote: ‘Welcome to the world of Instagram Turbo Bridge… he has completed our little family for a while now… and it was nice keeping him all to ourselves for a bit… but you guys deserve to experience the cuteness!

‘I hope he puts a smile on your face as much as he does ours … he’s had a few name changes along the way bless him … Sonic … then Sprinkles (not fave) … then Simba and now Turbo!’

Previously, Frankie had to rehome her pug and chihuahua, Presley and Pixie, due to son Parker’s breathing problems, after doctors suggested it would be ‘best if we didn’t have dogs’.

And while no dog is 100 percent hypoallergenic, Maltipoos like Turbo produce less dander, making them an ideal choice for people with allergies or breathing problems, like Parker.

Emmerdale actor Danny Miller is heading into the castle as a brand new dad, after his partner Steph Jones gave birth just weeks ago.

Best known for playing Aaron Dingle in the soap, Danny has two other babies back at home, too – cavapoos Gini and Kenny.

The soap star welcomed the red-haired pup Gini into their home in April 2020 during the first Covid lockdown, telling his followers the pup will ‘#neverwalkalone’.

“Arise King Kenny. Welcome to the famalam,” he wrote on his Instagram, adding: “#Kenny #Cavapoo

Do Ant and Dec have dogs?

Absolutely they do. Declan Donnolly has a gorgeous dachshund named Rocky.

Last January, the sausage dog got into a scuffle in the garden with a fox, and had to be treated by none other than Supervet Noel Fitzpatrick. Thankfully, the pup lived to tell the tale.

Ant is also a dog-lover, with a chocolate Labrador he has shared with ex-wife Lisa Armstrong, named Hurley.

The 45-year-old TV presenter also owns two Maltipoos called Milo and Bumble, who live with him and his second wife Anne Marie Armstrong.

Does anyone else have pets?

Diver Matty Lee competed alongside GB teammate Tom Daley at the 2020 Tokyo Olympics last year, where his diving buddy went viral when knitting a jumper for social media influencer Izzy the Frenchie – however, it doesn’t look as though Matty has any pets of his own. The same goes for footballer David Ginola, who played for Newcastle and Tottenham.

Radio 1 Extra host, Snoochie Shy is among the cat lovers of the group, owning a moggy called Magnum.

It’s likely the DJ will form friendship with producer Naughty Boy, who is also a cat lover, but suffered immense loss after his cat, Zion, passed away at the end of last month.

Paralympic champion Kadeena Cox, MBE admits she prefers dogs over cats, and had a family dog called Champers, who passed away in 2017.

Keep up to date with all our TeamDogs news by following our social pages. As well as videos, tips and advice, we’ll also be sharing some of your amazing doggy pictures so follow us on Facebook, Instagram and Twitter.

Are Victoria and Luke going to get back together in Emmerdale? The restaurant manager is hiding her feelings