The film collective Radio Silence first catapulted to fame over a decade ago, riding the success of YouTube videos that used an interactive feature the site has since abandoned. In the past five years, the trio have directed two studio films, with their second, “Ready or Not” opening this weekend — and nothing about the work they’ve produced on that scale suggests they’ve lost their DIY ethos.

But much has changed since the group’s early years, when one of them parlayed an office gig at New Line to sneak into the facility on the weekends to make future viral shorts with memorable names like “Roommate Alien Prank Goes Bad” (a smash hit with over 33 million views) and “The Time Machine: An Interactive Adventure.” Reflecting on that era, the filmmakers said in a recent interview, there’s no way they could have achieved the same success today.

In 2008, the group consisted of Matt Bettinelli-Olpin, Rob Polonsky, and Chad Villella (since then, Polonsky’s moved on; Bettinelli-Olpin and Villella have been joined by Tyler Gillett). They made waves on YouTube after posting the first of their “Interactive Adventures.” Juggling humor with shocking and scary twists, the videos applied a “Choose Your Own Adventure”-style storytelling to tell long-form stories in a relatively short period of time.

Using the “annotation” feature — which YouTube formally axed in 2018 — the conclusion of each video allowed viewers to choose which video they wanted to watch next, allowing them to continue the adventure based on their own preferences. “Our goal was always ‘let’s make movies,’” co-director Bettinelli-Olpin said, and while the collective started out with tidy short films, the annotation feature allowed them to pursue longer-form storytelling. “All of a sudden, we were making like 35, 40 minute things, still on YouTube.”

While the trio eventually began contributing memorable shorts to anthologies like “V/H/S” and “Southbound” before moving into their own feature-length offerings, they said that none of it would have happened without the early freedom of YouTube.

“It’s the only reason we’re able to make a movie now,” Bettinelli-Olpin said. “It was so different back then, I don’t want to sound like a super-old dude, but it was just a place to share things that you liked. We could go make these short, little rinky-dink videos for fun and they found an audience. It was this great, fresh, new world to be like, ‘Hey, look, we made this short this weekend!’”

That run-and-gun style of filmmaking has proven to have other benefits, as the trio have moved into the studio space. In 2014, Bettinelli-Olpin and Gillett directed “Devil’s Due” for Fox, based on Lindsay Devlin’s script (Villella served as executive producer). Made for just $7 million, the mid-January release grossed nearly $37 million at the worldwide box office.

Five years later, the guys are back in business with Fox — this time, with the more auteur-leaning Fox Searchlight arm, which has its own tradition of edgy horror films. “Ready or Not” allows them to unleash another rambunctious and gory horror-comedy, following a wealthy family as they welcome a new member (Samara Weaving) into the fold by literally trying to kill her. 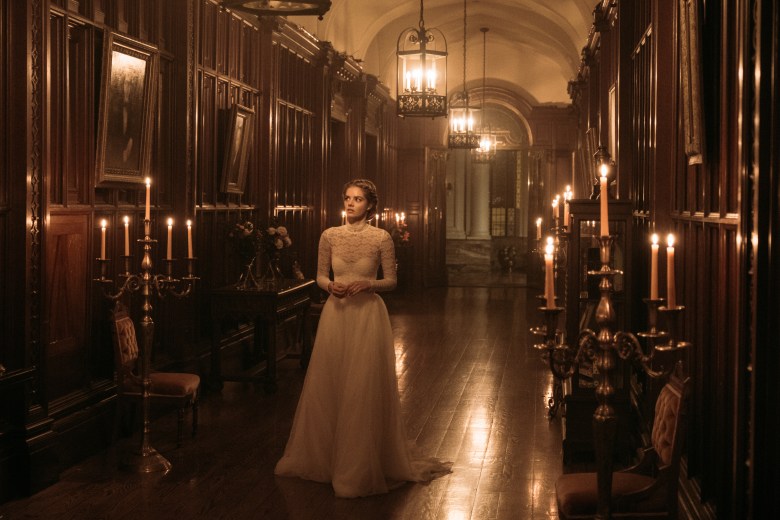 While plenty of other upstart filmmakers have made the jump to studio fare, Radio Silence has done it while maintaining their own group dynamic. “It insulates us a little bit,” Bettinelli-Olpin said. “Creatively, you have someone to talk to, to bounce ideas off, to work with, but then also on a very human level, it helps you commiserate during the bad times and celebrate during the good times.”

The group has been attached to the project, with a script from Guy Busick and Ryan Murphy, for nearly four years. During that time, the script went through a number of iterations. (Radio Silence stayed busy with other projects, having contributed two shorts to “Southbound” in between features, plus an attachment to a big screen take on Bryce Moore’s “The Memory Thief” that’s still in early stages.)

While the group hinted at other development projects that didn’t go their way, any lessons gleaned from those instances appears to have helped them be vocal about their needs for “Ready or Not.”

“One of the evolutions that we had to do as a DIY group working with the studio was, you have to ask for a little more permission, you have to engage multiple other steps to ultimately get something to the stage where you’re filming it and releasing it,” co-director Gillett said. “Given that we’ve always worked as a group, it’s always been easy to invite new ideas into that group. Our perspective and our ideas and our tone, we feel so confident and so strong about that, we are able to steer people into the version of something that we love.”

There are also practical applications. As Gillett put it: “How do we get the most production value for what we have?” With a cast of mostly up-and-comers and plenty of practical locations, “Ready or Not” was made for a relatively low budget by studio standards — a seven-figure price tag similar to “Devil’s Due.”

“It was using the tools that you have at hand in a way that you could enhance your production value,” producer Villella said. “With our early projects, back when we didn’t have a budget, we were like, ‘well, we have an office space we could shoot in!,’ because Matt was the office manager at New Line and he had the keys to the office, so we’d go in on a Saturday when nobody was working and we could just take over the building.” (Bettinelli-Olpin and Gillett actually met while working the mailroom of the Warner Bros. specialty label.)

Even with a bigger budget on “Ready or Not” than those early YouTube offerings, the team was still intent on utilizing their locations to the fullest extent. The entire film, which takes place in and around the sprawling estate belonging to the eccentric Le Domas family (they make board games for a living, part of their affection for bloody playtimes), only features one set. The rest is practical, a throwback to the way Radio Silence used to do it when they were still handling most things by themselves.

“We built a sort of a mini-film school ourselves where we were doing everything from soup to nuts,” Gillett said. “When you’re doing it, it’s frustrating that you can’t focus on this thing and you can’t focus on that thing, but the fact that we got to touch every part of the filmmaking process of just makes us better. … Having our hands on every part of the process has been an incredibly valuable creative experience for us, not only coming together and having a cohesive vision as a team and as Radio Silence, but knowing what we’re asking for when we engage that process on a larger scale.”

The studio paychecks don’t hurt. Radio Silence no longer makes money off their old YouTube videos: According to Bettinelli-Olpin, due to changing ad-share rules, any cash goes to the music libraries they licensed their knockoff songs and scores from.

YouTube is no longer the most hospitable place for creative freedom (shorts with knockoff songs and scores are often pulled down in an instant). When the group was making shorts on the site, they enjoyed the ability to accrue gradual freedom and minimal backlash. “It wasn’t yet that place where, if you put something up and people didn’t like, they just eviscerated you,” Bettinelli-Olpin said.

They look back on that time fondly.. “We actually had a really healthy experience with YouTube,” Bettinelli-Olpin said. “It’s just changed a lot, but we are so grateful for what it was in the late aughts.”

Fox Searchlight Pictures will release “Ready or Not” on Wednesday, August 21.

What is the Cardi B leaked photo and what has she said about it?