HARRY Potter actor Rupert Grint will soon have a property empire to rival the size of ­Hogwarts itself.

Rupert — who earned £40million playing Harry’s pal Ron Weasley in the eight-film adaptation of the famous books by JK Rowling — has just added another £10.6million of homes to his portfolio. 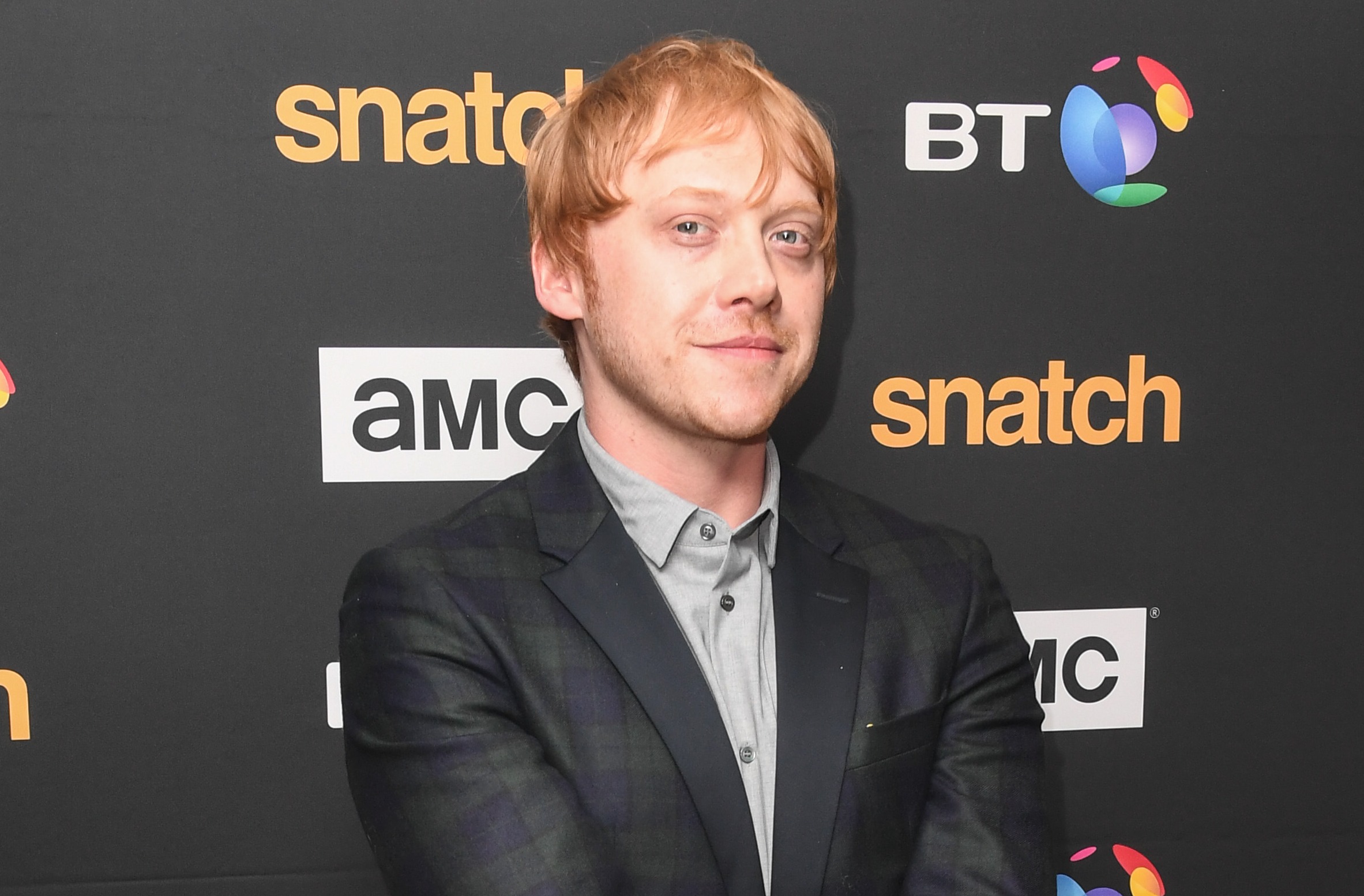 It means he now has a stack of properties worth a total of £24MILLION thanks to savvy investments.

A source said: “Rupert’s become a real property magnate and has been working his magic on building his empire.

“His portfolio is worth around £24million now and he’s growing it all   the time.

“He has started three property businesses which are all bringing in a tidy sum.

“One of his companies, Clay 10, invested in over £8million worth of property in the last financial year. 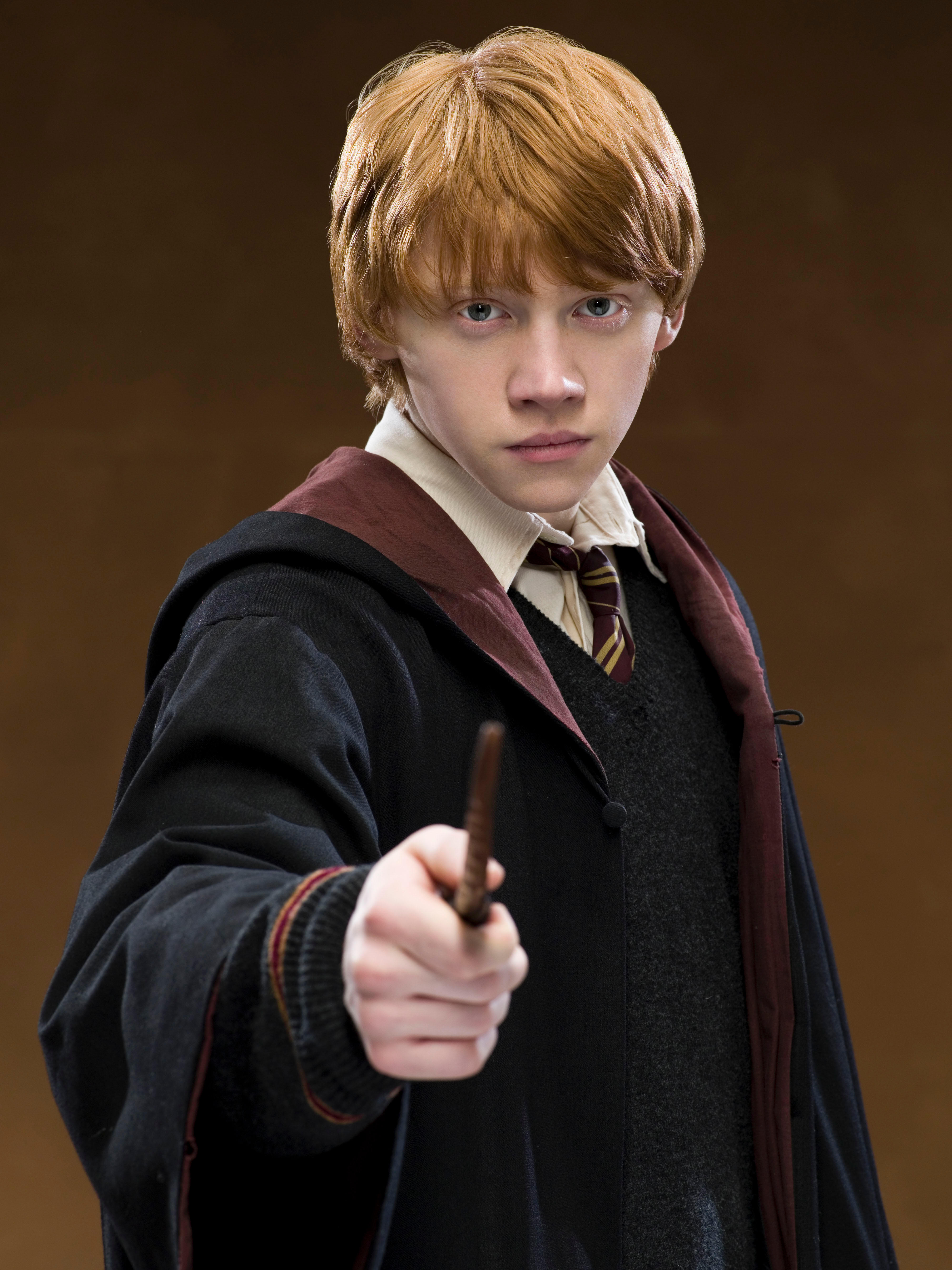 “Another of his firms, ­Oneonesix Development, has been buying up places just outside of London.

“Rupert is a shrewd investor and is buying up high-spec rental properties with good transport links to the city as well as more plush houses.

“Recently he bought a house for £500,000 in Hitchin, ­Herts, and then spent £1.5million on two neighbouring houses in Luton, Beds.”

That’s not all, though.

Rupert — who also owns Eevil Plan Properties — has also splashed the cash on three properties close to his own home in Herts.

Back in 2009 he treated himself to a massive six-bedroom 18th-century mansion in Kimpton.

The pad, which boasts an indoor swimming pool and tennis courts, has separate housing for staff over its 22 acres of land. It also has a gym,   cinema room, games room and three massive ­reception rooms spread over three floors.

Rupert has never lived at the property but is registered as the owner of the pad, which is in need of ­renovation, according to the latest property brochure on the selling agent’s website.

He paid £5.4million in cash for it, and it is now worth more than £6million.

Not bad going when you consider he has not had to do anything but keep the keys in his back pocket.

The actor, who last month became a father after his ­girlfriend, actress Georgia Groome, gave birth to a ­daughter, is still on the hunt for more investments.

The insider continued: “Rupert has been bitten by the ­property bug and has become really knowledgeable about his investments.

“He’s been clever by building up such a varied portfolio, as it will keep the cash rolling in for the rest of his life.”

READ ON FOR MORE OF SIMON BOYLE'S BIZARRE COLUMN

The I’m A Celeb champ looked ­glowing in a cream playsuit from her own In The Style collection. Jacqueline threw herself into work when her marriage to love-rat Dan Osborne went awry last month. 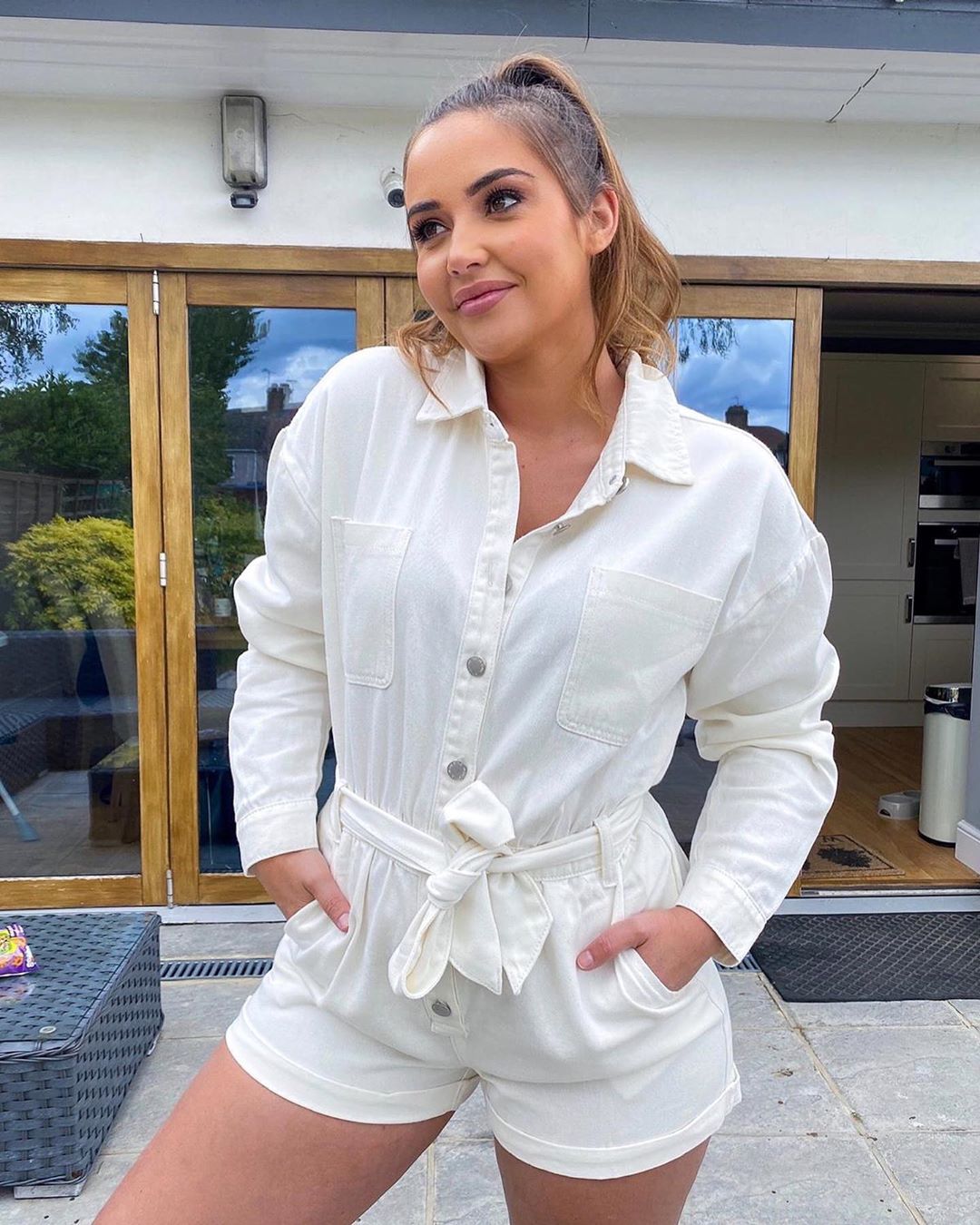 The ex-EastEnder moved out of their home to give herself some space but has since vowed to get their relationship back on track after it was yet again rocked by cheating claims against Dan.

Jacqueline now splits her time between her ­parents’ home and the house she shares with former Towie star Dan and their two kids.

She told fans: “I had really been struggling lately and, as I said the other day, I’ve just needed some time and breathing space.”

I’m not surprised she needs a breather – I’m amazed by ­anyone who can spend longer than 15 minutes in the company of reality reject Dan.

FILMMAKER Karyn Kusama’s new movie ­adaptation of Bram Stoker’s Dracula will be true to the original. She said on Stephen King’s The Kingcast podcast: “It’s a fairly ­faithful adaptation of Bram’s novel.”

THEY had a string of hits including Mama Do The Hump, Heart Skips A Beat and Down With The Trumpets – and now Rizzle Kicks are hoping they can continue their success.

The duo – pals Jordan Stephens and Harley Alexander-Sule – are in talks to reunite five years after their last performance.

On Jordan’s Spotify podcast Killing It, Harley, whose anxiety stopped him from performing live, said: “We’ve spoken about doing stuff again, definitely, and I’m really up for it. Especially the creating of music part and I’m into the idea of performing, kind of.

Jordan added: “One hundred per cent. We’re going to do something for sure.” 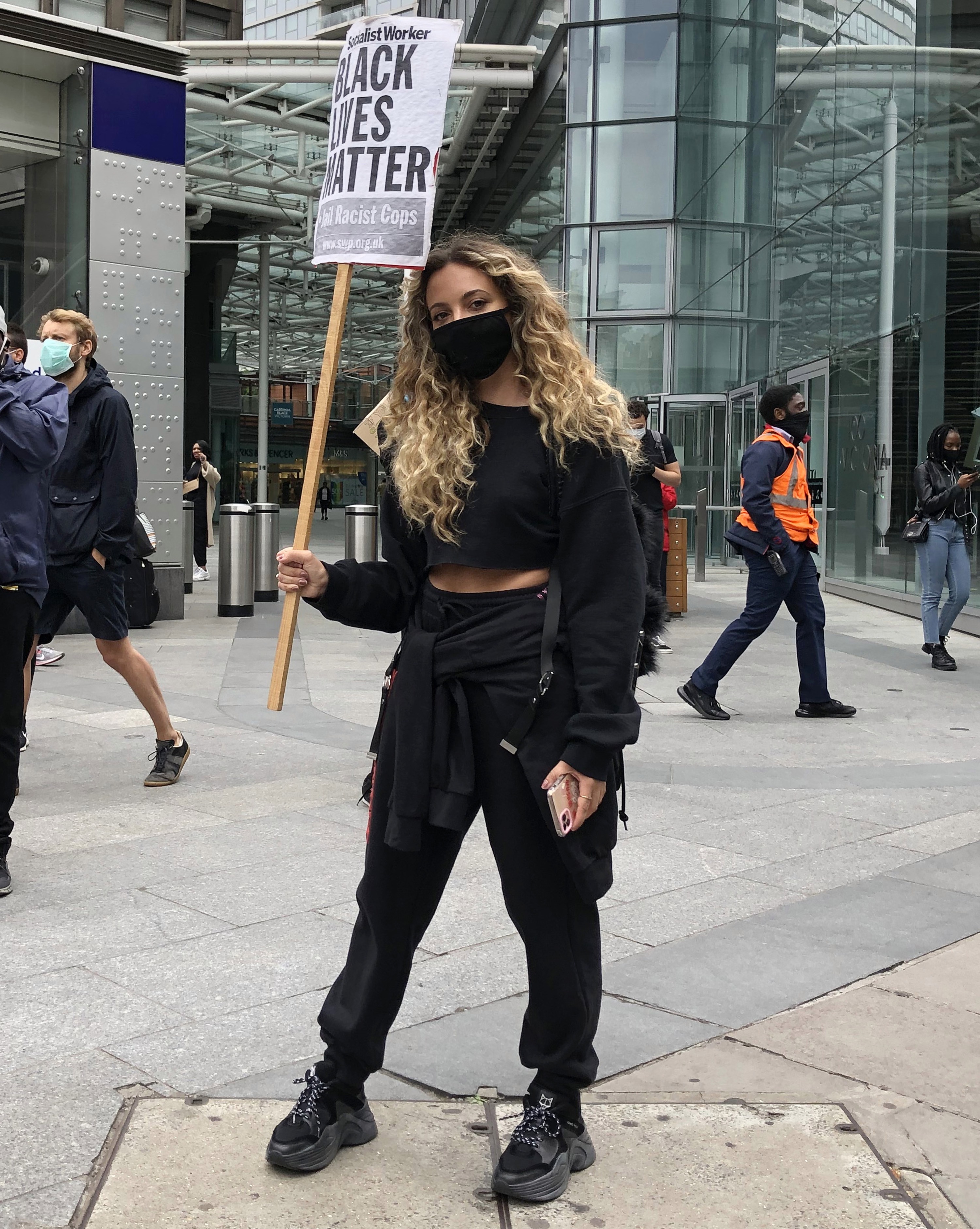 And they are sure to have a fan in Little Mix’s Jade Thirlwall. I told last month how she was growing close to Jordan and they had been on a socially distanced date.

At the weekend, she was snapped holding a placard at a Black Lives Matter protest in London, which matched one that Jordan posed with. That led fans to believe they had met up again for the cause.

IGGY Azalea has given birth to a son. The singer, who had not confirmed she was pregnant, announced the news on Instagram. She said: “I want to keep his life private but wanted to make it clear he is not a secret & I love him beyond words.”

JESSIE Ware has revealed she stopped ­talking to her father for years after he cheated on her mum.

In an emotional interview, the  singer told of the rift with ­journalist dad John Ware: “I didn’t speak to my father  for years. I felt loyal to my mother.  We were all very hurt by what he’d done.”

Jessie – who will release  new album What’s Your Pleasure on June 26 – says the pair have  patched things up but admitted she angered her father with the track Sam on last  album Spotlight, on which she sang: “I found a man far from my father.”

Speaking on the How To Fail podcast, Jessie said: “Our ­relationship since I’ve had children has really improved and I love him very dearly.

“He’ll never forgive me for writing the song Sam  because there’s a line in it which he is just so incredibly hurt about.”

RONAN Keating’s wife Storm froze his Amazon account after he kept buying random things, including a gazebo. After she caught him at it again, Ronan said on Magic FM Breakfast: “She’s frozen it. What do I do on a weekend now?”

RITA Ora is keeping her body trim in lockdown – and ­ensuring she looks sexy even while working out.

The Masked Singer judge put on an eye-popping display in this tiny white croptop. 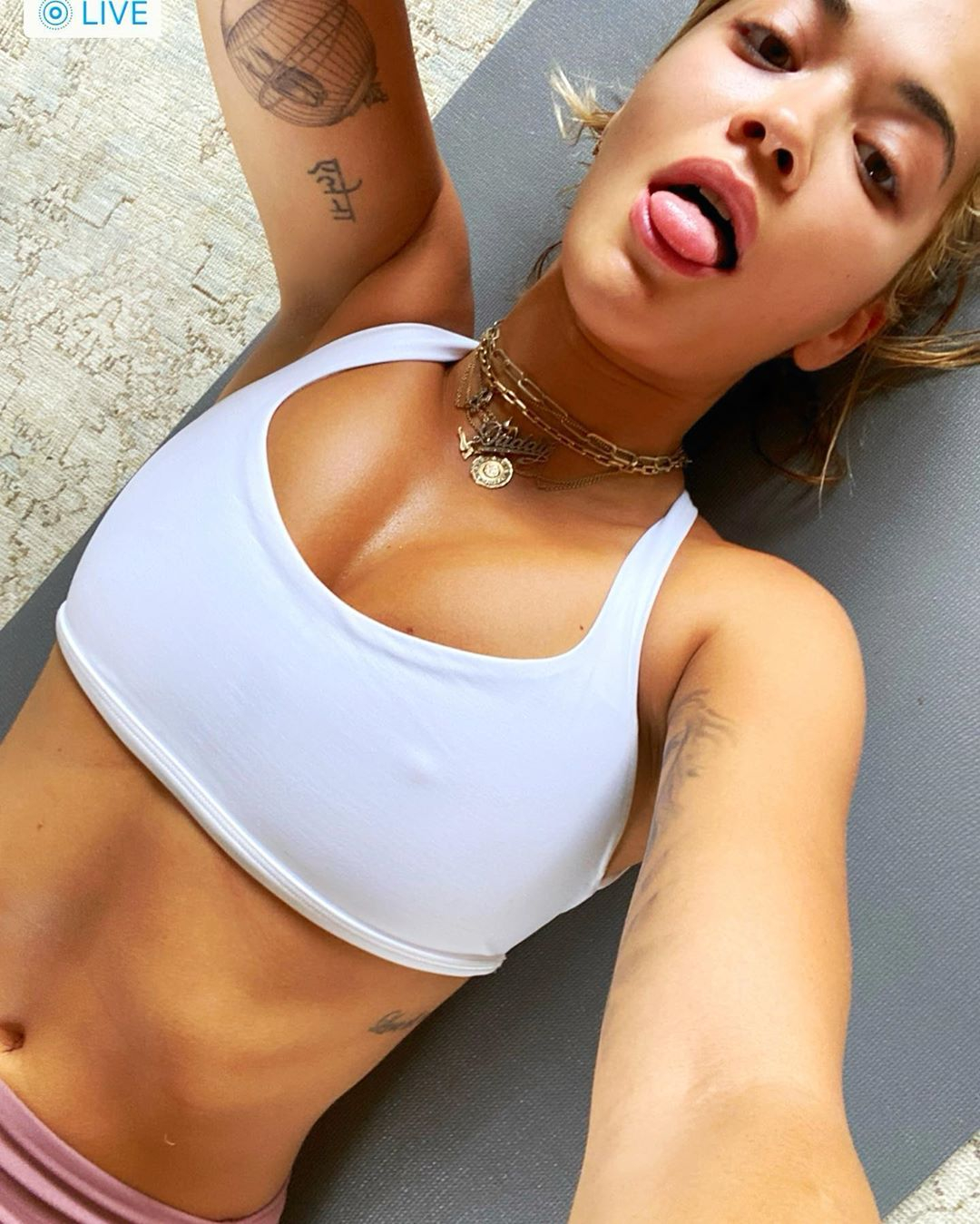 She posed seductively after her session and ­captioned the photo: “Keep moving.”

In an Instagram post this week the singer said she had loved the camera as a child – and clearly she still does.

Alongside home videos of herself from 1994, she wrote: “I hope this makes you smile, just watching a life of a young carefree kid.

“This is what everyone deserves, a chance to have a good life and an opportunity  to  be happy.”

Perhaps her own sizzling workout video could be on the horizon . . .

KENDALL Jenner is raising cash for NHS Charities Together by auctioning off one of her favourite outfits. The model has handed over a designer blazer which will be sold in Vogue’s The Way We Wore sale.

Rob has a pop at food

ROBBIE Williams says his addiction to food is far worse than his issues with drugs and alcohol.

The Rock DJ singer has been slimming down for the past year but admitted he still struggles with his eating habits. He  is now clean from drugs and alcohol after going to rehab in 2007

Robbie explained: “When you get rid of absolutely everything else, it becomes the last obstacle to ­overcome. It is a constant.

“Because if you’ve stopped doing coke, you don’t see coke.

Speaking in Australia, he added: “It’s different from sex, coke  and booze addiction, because you don’t have to have those things.

At his heaviest Rob was branded “Blobbie Williams” and Noel Gallagher taunted him as “the fat dancer from Take That”. He previously said of his yo-yo dieting: “I’ve either been overweight and unhappy or been extreme and underweight and unhappy. I seem to have found a middle way.”

DISNEY is making a movie inspired by Lionel Richie’s hits. His tunes, including All Night Long, will be used in the jukebox musical in a similar way to ABBA’s Mamma Mia! films. The singer and his manager are ensuring they stay involved by producing the project.

PETER Andre says he was locked inside a room by a ghost at an Aussie resort. The singer said: “I was in the cool room, which had a door that made a really loud noise every time you closed it. Then I noticed the door was shut – but there’d been no noise. And then it wouldn’t open.”

DESPITE rocketing to the top of the charts aged 20 with her debut album Songs In A Minor, Alicia Keys insists it was no fun. She explained: “I swear, I wouldn’t go back to being 20 if somebody paid me – it was the worst time ever. I wanted to fit in so desperately. I was so blind.”

Strictly Come Dancing 2019: Do athletes have a more chance of winning? Can Alex Scott win? The Mandalorian season 2: Fans horrified as they 'book the day off work' for binge – and get a nasty shock
Movies