Former Real Housewives of New York star Heather Thomson was spotted having lunch with Ramona Singer and Luann de Lesseps around a month after filming started. Ramona posted a picture of the three women posing in front of Del Frisco’s Grille Friday.

“Great lunch today with the girls,” she wrote in the caption.

Ramona stood on the left wearing a black and gold buttoned-blazer and white pants.

Heather wrapped her arms around the other two women in the middle wearing a blazer, white T-shirt, and Jeans.

Fans quickly began to speculate Heather’s possible reappearance with Ramona and Luann on the upcoming season of RHONY. 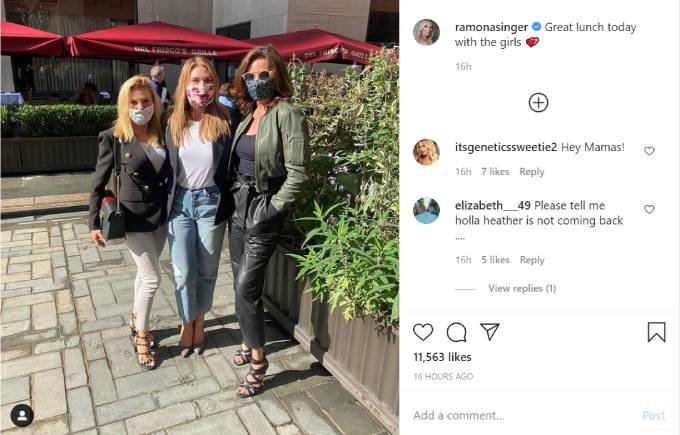 “Is heather back on housewives??” one fan asked in the post’s comments section.

“Please tell me Heather is back,” another added.

Will Heather be on RHONY Season 13?

Neither Bravo nor Heather has confirmed whether she’ll be appearing in the upcoming season.

It is unlikely that she will be returning as a full-time cast member. The show already announced new cast member, Eboni K. Williams, as a replacement for Dorinda Medley after she was allegedly let go.

Heather even commended Dorinda for leaving the show reiterating how exhausting filming is.

“I think sometimes to take a little bit of a break is important,” Heather told Andy on n Watch What Happens Live with Andy Cohen: @ Home on September 10.

“The Housewives is taxing,” she continued. “There’s a lot that goes on, and it’s a lot of work, and it’s emotional. It’s real, it’s not a scripted show, and the emotions that happen, whether they’re turned up or dialed in a little bit, are a lot. So, to take a break — and I’m one to say it — you know, take a break and just kind of sit back will always serve her well, I’m sure.”

It is also unlikely that Heather will return as a friend on the show.

However, it’s definitely plausible that she will return for an episode or two in the upcoming season.

Since Ramona has already uploaded separate shot of herself with Sonja Morgan and Luann at the garden while filming for RHONY, it’s not impossible that this is another shot from set.

Heather first appeared on RHONY in Season 5. She joined with her friend Carole Radziwill.

She was known for being the Type A, mom friend of the group. She even earned the title of “uncool” from Luann after reprimanding her for bringing a random man into the house.

She left the show three seasons later after filming Season 7.

The Real Housewives of New York City is currently on hiatus.