“To be honest with you, I feel like everything I’ve done to raise awareness and remind people of his crime and the abuse that I’ve been through has been suppressed all along,” Winters, 44, told IndieWire. “It’s been a constant uphill battle.”

Fathom and Screen Media first released “Jeepers Creepers 3” September 26, 2017, when it grossed $2.3 million over two nights. That came just weeks before a tweet from Alyssa Milano that helped jumpstart the conversation around sexual misconduct in Hollywood.

Salva’s crime came some 30 years before, when he was convicted of sexual misconduct with the 12-year-old Winters, who starred in his first feature in 1989, “Clownhouse.” Salva was working in a child care center when he met Winters and cast him in a 1986 short film, “Something in the Basement,” which later spawned “Clownhouse.”

Salva videotaped one of the sexual encounters, and authorities also found commercial videotapes and magazines containing child pornography in his home. He pleaded guilty to lewd and lascivious conduct, oral sex with a person under 14, and procuring a child for pornography, and was sentenced to three years in state prison. He served 15 months, and completed his parole in 1992. 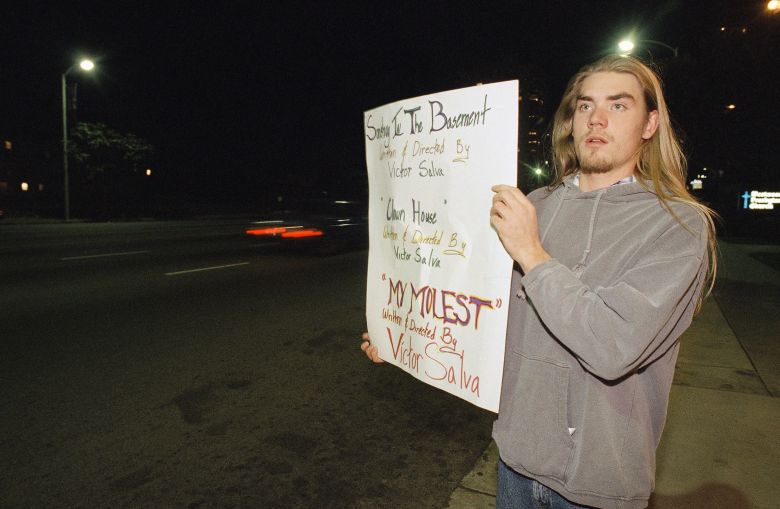 Nathan Winters, 20, protests outside of the Avco Center movie theatre in Los Angeles, 1995.

By early 1995, Salva was directing a $10 million production for Disney, “Powder,” starring Jeff Goldblum and Mary Steenburgen. In 2001, he launched the “Jeepers Creepers” franchise, executive produced by Francis Ford Coppola — who also served as a producer on “Clownhouse.”

When the studio released “Powder” in October 1995, Winters protested outside screenings. In a statement at the time, Salva said: “I paid for my mistakes dearly. Now, nearly 10 years later, I am excited about my work as a filmmaker and look forward to continuing make a positive contribution to our industry.”

“Jeepers Creepers 3” also came under fire during its 2017 release: A final cut of the film, viewed via a screening link sent to critics, included a scene where two characters discussed why a young woman, Addison, no longer lives with her stepfather. One of the characters is romantically interested in Addison and seemed to understand why her stepfather would make “overtures” on her: “Can you blame him though? I mean, look at her,” the character says. “The heart wants what it wants, am I right?” The scene did not make it to the theatrical release.

Winters’ experience surviving Salva’s abuse is the subject of the upcoming documentary, “7he 6oy,” directed by Connar Frazier. The film is currently seeking distribution and is set for release Oct. 31, possibly though unconventional methods like USB drives, Winters said. He said making the documentary has been a part of his healing process.

Two representatives for Fathom did not return multiple requests for comment. Screening locations will be announced October 4.

'BIP': Tayshia Adams Alluded on Instagram That Her Future Is Brighter Without John Paul Jones