Home » TV » Emmerdale spoilers: Frank Clayton death was teased in this secret clue – did you spot it?

Tonight’s heartbreaking instalments of Emmerdale finally revealed it was Frank Clayton who died in the Emmerdale factory fire.

The character’s secret dealings remain unknown, after days of lying to his girlfriend Megan Macey (played by Gaynor Faye) on the ITV soap.

And in one enormous act of heroism, Frank ran into the burning factory to save his daughter Tracy (Amy Walsh) during tonight’s harrowing episodes.

Tracy had been trapped behind a store cupboard door waiting for Billy Fletcher (Jay Kontzle) when the door handle broke, but when Frank (Michael Praed) rescued Tracy from certain death, he made the fatal decision to return for his secret possessions.

It seemed all hope was not lost when the ex-convict suddenly emerged from the burning building, but just as his family and Megan cheered for his survival a massive explosion rocked the area.

Frank was flung across the screen and the paramedics couldn’t revive the father-of-two.

But there were a number of major clues sealing Frank’s death much earlier on in tonight’s episodes, did you notice them?

After Kerry set off the fire alarm in Jai’s (Chris Bisson) sweet factory, Frank panicked about his mystery items hidden in his locker.

Jai fired him for his poor timekeeping over the last week and when Frank later begged his boss to reconsider in the Woolpack pub, he completely lost it.

“Jai you are a vile, heartless little man, and one day, you will regret the way you treat people,” Frank spat, clearly foreshadowing the storyline to come will indeed see Jai reflecting on their last conversation. 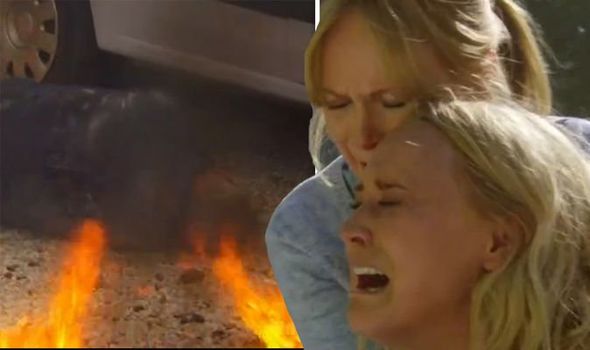 You are a vile man Jai Sharma

What’s more, in a brief scene between vet Vanessa (Michelle Hardwick) and the ill-fated Frank, the former said ominously: “I’ve always got time for my dad.”

In later episodes, the beloved character will undoubtedly play over their final moment in her mind, wondering if there was anything she could have done to prevent his death – as is typical in the stages of grief.

Perhaps the most obvious was Frank’s final conversation with his girlfriend Megan (Gaynor Faye).

Megan had been questioning her beau’s mysterious absences in recent episodes, determined to get to the bottom of his lies.

In tonight’s instalments, Frank insisted all would finally become clear in a chat between them at the pub.

“Give me half an hour and I’ll be right back,” Frank promised – which was a surefire hint something would go wrong.

“I’ll wait in here,” Megan said happily, grinning as Frank told her he loved her.

When Megan discovered Frank had been lying about his whereabouts however, she told Vanessa “me and your dad will be over”.

Was this another hint by the Emmerdale writers to set up the soap’s fans for what’s to come?

Seeing her father’s lifeless body outside the factory, Tracy was utterly devastated the whole will village was rocked by the tragedy. What’s next on the soap?