Emmerdale fans have predicted how Meena Jutla will be caught on the ITV soap after she brutally murdered Leanna Cavanagh in last week's episodes.

Last week, Meena (Paige Sandhu) shared a heated exchange with Leanna (Mimi Slinger) before she grabbed her by the shirt and brutally hauled her off a bridge to fall to her death.

Ever since, the evil nurse has been wearing Leanna's ring on a chain around her neck which she has been proudly playing with in front of several of the village's residents, including her own sister Manpreet Sharma.

At one point on Tuesday's episode, Meena even held onto the item of jewellery in front of Leanna’s on-off boyfriend Jacob Gallagher at The Woolpack pub.

Taking to Twitter, soap watchers predicted that the ring would lead to Meena's downfall, especially as she continues to show it off in front of several of the villagers.

One person said: "Meena keeping that ring will be her downfall #Emmerdale."

A different soap watcher put: "When will the ring give Meena away? #Emmerdale."

Another viewer commented: "Meena just trying to make it easy for everyone to know it was her now she has that ring on her necklace #Emmerdale."

While a different account added: "Hoping they notice the ring is missing & Meena gets caught with it. #Emmerdale @emmerdale."

Elsewhere, Meena turns her attention on Liam Cavanagh in next week's Emmerdale after murdering his daughter Leanna.

So far, the "evil" nurse has got away with murder after the police ruled Leanna's death as an "accidental fall" on Monday's episode, which has left soap fans furious.

And Meena will leave viewers even more shocked next week as she turns her attentions to grieving Liam (Jonny McPherson) and attempts to manipulate him into destroying his dead daughter Leanna's belongings.

The twist comes after a distraught Liam goes missing and leaves his wife Leyla Harding (Roxy Shahidi) worried, as she turns to Meena's boyfriend David Metcalfe (Matthew Wolfenden) for support.

Meena is left furious over this and decides to track down Liam herself where she finds the devastated doctor on a bench at the crematorium. 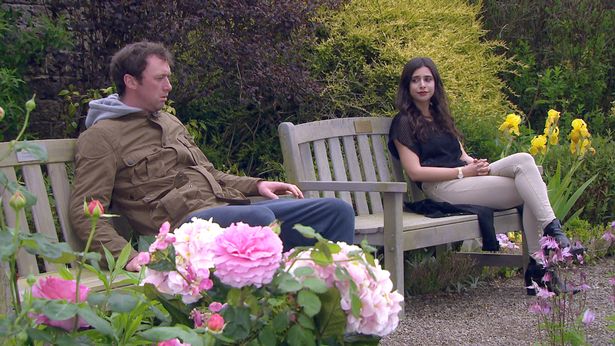 The evil nurse apologies to Liam for his loss, with the doctor unaware she is responsible for his daughter's death, and suggests that he gets rid of Leanna's belongings in a bid to overcome his grief.

Later on, Leyla is left furious as she sees Liam getting rid of Leanna's belongings in bin bags and is further angered when she discovers it was Meena's idea.

The decision also leaves Leanna’s on-off boyfriend Jacob Gallagher annoyed and he accuses Liam of getting rid of his daughter like rubbish, which sparks an argument between the two characters.

Become an OK! VIP and get all of our exclusive interviews, videos and stunning photo shoots sent straight to your inbox every week!

You'll receive an email with stories exclusive only for OK! VIP members, including celebrity house tours, baby reveals, wedding snaps and so much more!

Leyla offers to give Liam some space but he asks her to stay and help him with Leanna’s funeral arrangements.

Jacob asks Leyla if he can also get involved with the planning and she agrees as long as they don't tell Liam.

Will Liam find out and who will Meena manipulate next in the village?

Emmerdale continues on weeknights at 7pm on ITV.