“Downton Abbey” was a television giant before the likes of “Game of Thrones” captured audiences. The Julian Fellowes-created period drama was the biggest international series at the time, bringing home so many awards and earning so much acclaim that Guinness World Records hailed it as the most critically acclaimed English-language television series of 2011. With its conclusion in 2015 after six seasons, the only return worthy of “Downton Abbey” would be in even bigger fashion: on the silver screen.

Director Michael Engler is no stranger to “Downton Abbey,” having directed several episodes, including the feature-length finale Christmas special. The series takes place in the titular Yorkshire castle, home of the noble Crawley family and their loyal servants downstairs. Over six seasons, the family was touched by historical events ranging from the sinking of the Titanic and World War I to the Spanish flu epidemic and Irish War for Independence. Coming on to the movie, Engler knew that the show’s already grand scope would need to be similarly grand for the movie.

“It was scaled up, both cinematically and in terms of the story,” he said. “It needed to feel like one big unifying event that no matter what else was going on in their individual stories, it would bring them all together.”

Fellowes scripted the Crawleys’ ultimate adventure in class and etiquette: A visit from the King and Queen of England. Not only would Their Majesties swing through York, they would also stay at Downton overnight for the duration of two meals and a parade. Lady Mary (Michelle Dockery) is firmly in charge, allowing her parents (Hugh Bonneville, Elizabeth McGovern) to offer sage advice. Nevertheless, the estate is thrown into a state of disarray and excitement to prepare for the greatest honor imaginable.

“I did not realize that, at that time, if you were titled and the king and queen said, ‘Oh, we’re coming to stay,’ you had to put them up with their staff and their retinue, and at your expense. You fed them and all of that,” said Engler, who’s American. “I thought that was a fascinating piece of information, that it’s a great honor and an enormous imposition.” 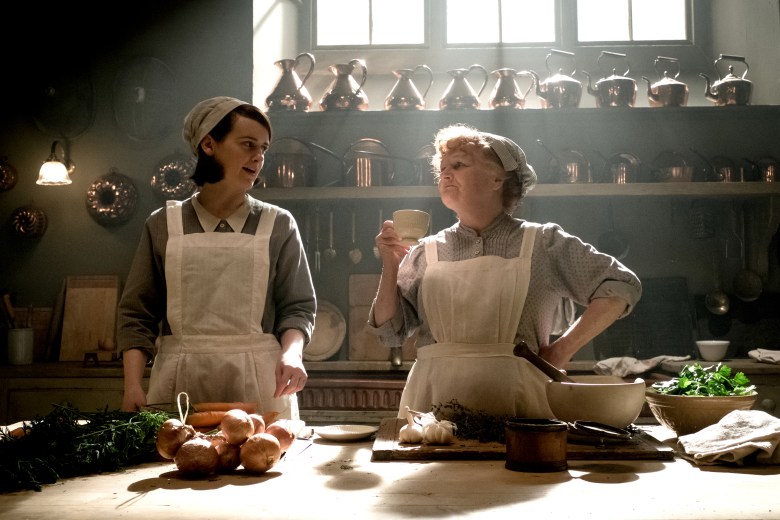 Fortunately, the cook Mrs. Patmore (Lesley Nicol) and her assistant Daisy (Sophie McShera) have the menu well in hand, and even former butler Mr. Carson (Jim Carter) has come out of retirement temporarily to whip the staff into shape. The royal retinue, however, throws a spanner in the works when they insist on taking control and benching the Downton servants. Upstairs, Lady Mary is the face of Downton and must keep her anti-monarchist brother-in-law Tom Branson (Allen Leech) from speaking his mind in front of the King and Queen. Edith (Laura Carmichael), the Marchioness of Hexham, is also in town to add more nobility to the proceedings, but it’s not the life she had imagined back when she was editing a magazine.

“The amazing thing about it is that everybody rises to the call and takes it as an opportunity to prove themselves and to make a contribution in whatever way they can. Whether they’re at the top of the social order, or at the bottom, they use the opportunity to bring honor on to the house,” said Engler. “As a mechanism, it’s a great thing, because the house is what the whole series is about, the life that this house engenders. And so, the servants or the family, we have this responsibility and opportunity to make its name shine.”

The “Downton Abbey” ensemble cast was already massive since it consists of both the upstairs and downstairs denizens, but the film doesn’t presume foreknowledge of the characters. Therefore, newcomers to the series don’t need to know who Matthew or Sybil were (or get flashbacks to their untimely demises).

”We wanted it to feel like you didn’t have to be a diehard fan to enjoy it,” said Engler. “However, if you were an avid fan or somebody who watched it occasionally, you would get a lot of detail about characters and relationships that was … rich and fulfilling.”

In fact, the movie dares to inflate the cast even more. Not only are Simon Jones and Geraldine James on hand to play the King and Queen, but Imelda Staunton joins in the fun as part of their retinue and more than a match for the sharp-tongued Violet Crawley (Maggie Smith). Tuppence Middleton (“Sense8,” “War and Peace”) also comes on for a mysterious but key role. 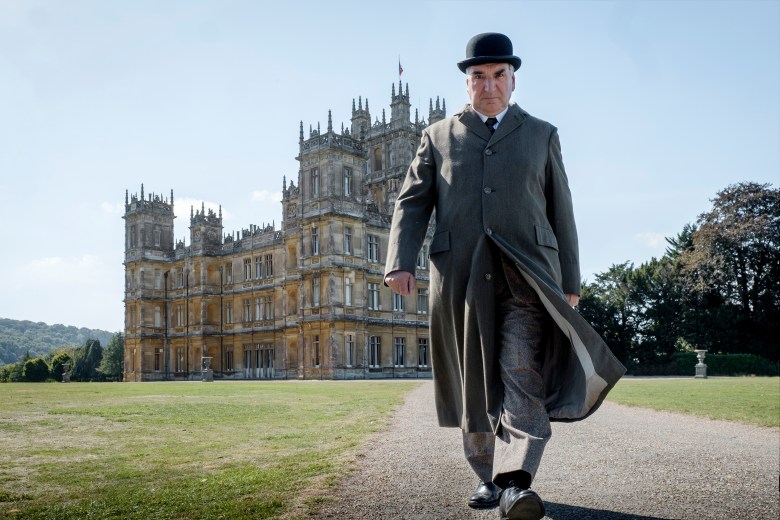 Engler also wanted to take advantage of the larger-than-life screen when it came to capturing the gorgeous English countryside and Downton’s impressive structure and grounds. “The house was always shot very beautifully, but the whole idea in the film was to give it an even bigger context, like really putting it in the landscape with those big drone shots and helicopter shots,” he said.

The movie also broadens the scope beyond just Downton proper to show where the family and staff might go to either shop or socialize.

“We were really creating the scale of it as a bigger property, making the village more alive,” said Engler. “We always knew there was more to the village than what you saw. There had to be, because there had to be shops and all sorts of things. But it’s the first time we saw Mr. Bakewell’s shop, it’s the first time we saw that little strip where the parade takes place.”

While the size of Highclere Castle, the real-life castle where Downton is shot, hasn’t changed, production wanted to show more of the interior than has been seen before. That includes rooms that hadn’t been explored on camera or showing richer details in set dressing.

“In the house, we were setting things in places that there didn’t use to be locations for, like the wine cellar and the silver servery safe. The hallways were bigger and longer and more connected, so that we could show more of the world that used to just be implied previously,” Engler said.

“One of the things I thought Donal Woods did so brilliant was he recreated those bedrooms from the show. It had the same furniture and dressings and things, but then instead of the wall being painted green, it was a beautiful cut green velvet wall fabric,” he added. “Or the same thing in Edith’s room, which is kind of a butterscotch. Instead of it being painted, it was beautiful silk wall covering that was that color, so you felt like you were seeing it in more detail, you felt the richness of it. It felt familiar, but it all felt elevated.” 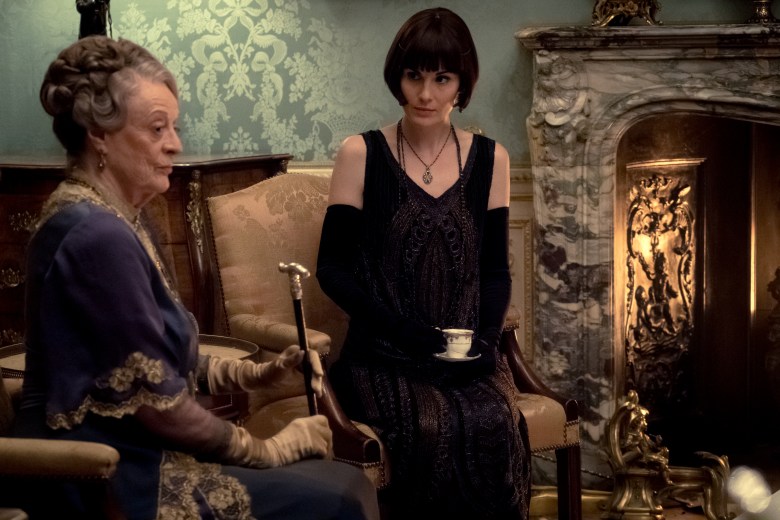 Familiarity is key. Although the scale and screen are bigger, Engler feels that “Downton Abbey” is a true continuation in that it still feels the same and is connected to the series.

“I think fans can expect the best … the history, the beauty, the costumes, the glorious locations, that’s all there, and bigger than ever,” he said. “It’s also about revisiting all the things you’ve come to know about the show; the emotional relationships, the comedy of it, the relationship of the above stairs family and servants below stairs.”

It’s been four years since “Downton Abbey” closed its doors on TV, and now that the film is out, fans may just clamor for more. Carmichael, who plays the previously beleaguered Lady Edith, seems hesitant to promise any more installments.

“Oh my gosh. I don’t know. It was so mad. It was such a rigamarole to get one together,” she said. “It was delightful, so who knows? It all comes down to Lord Fellowes, to Julian, and I’m thrilled to say that he’s prolific and working on 75 other projects at the moment.”

NBC Releases ‘This Is Us’ Season 5 Trailer (TV News Roundup)