A DEVASTATED Guy Ritchie has revealed the smoking ruins of his pub, after it took 70 firefighters 12 hours to put the smoking blaze out.

The British film director shared a photo showing the charred remains of his Lore of the Land pub to Instagram, after the boozer was engulfed in a huge blaze on Wednesday. 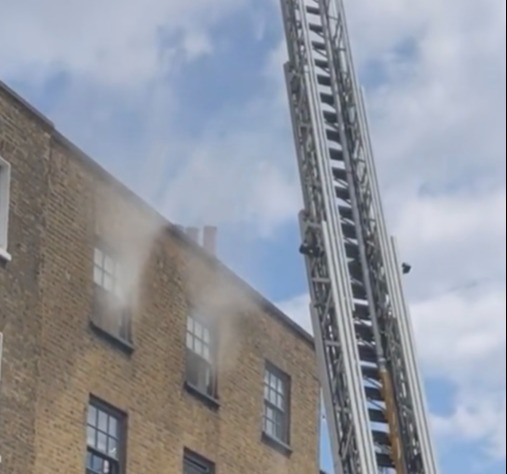 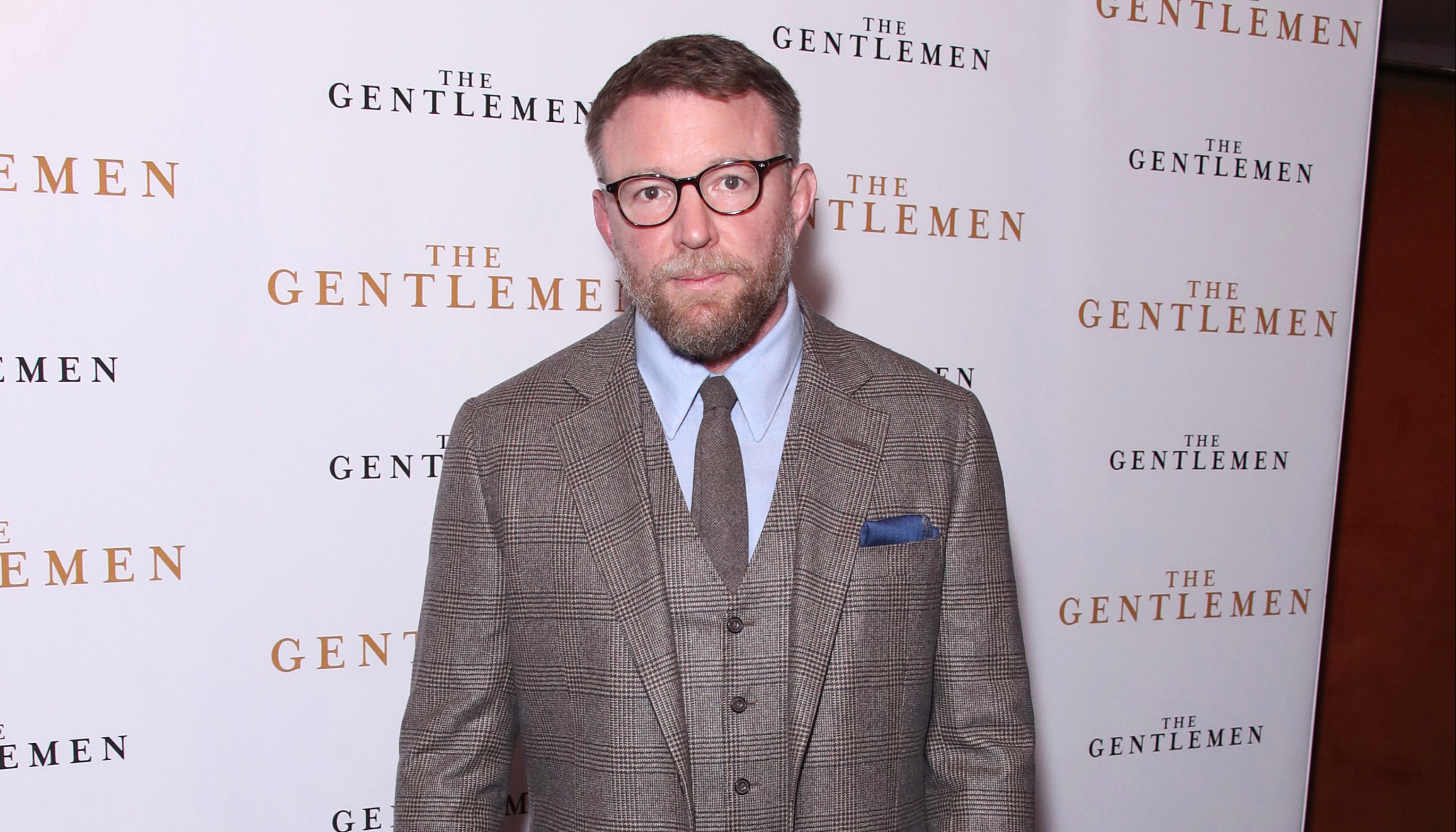 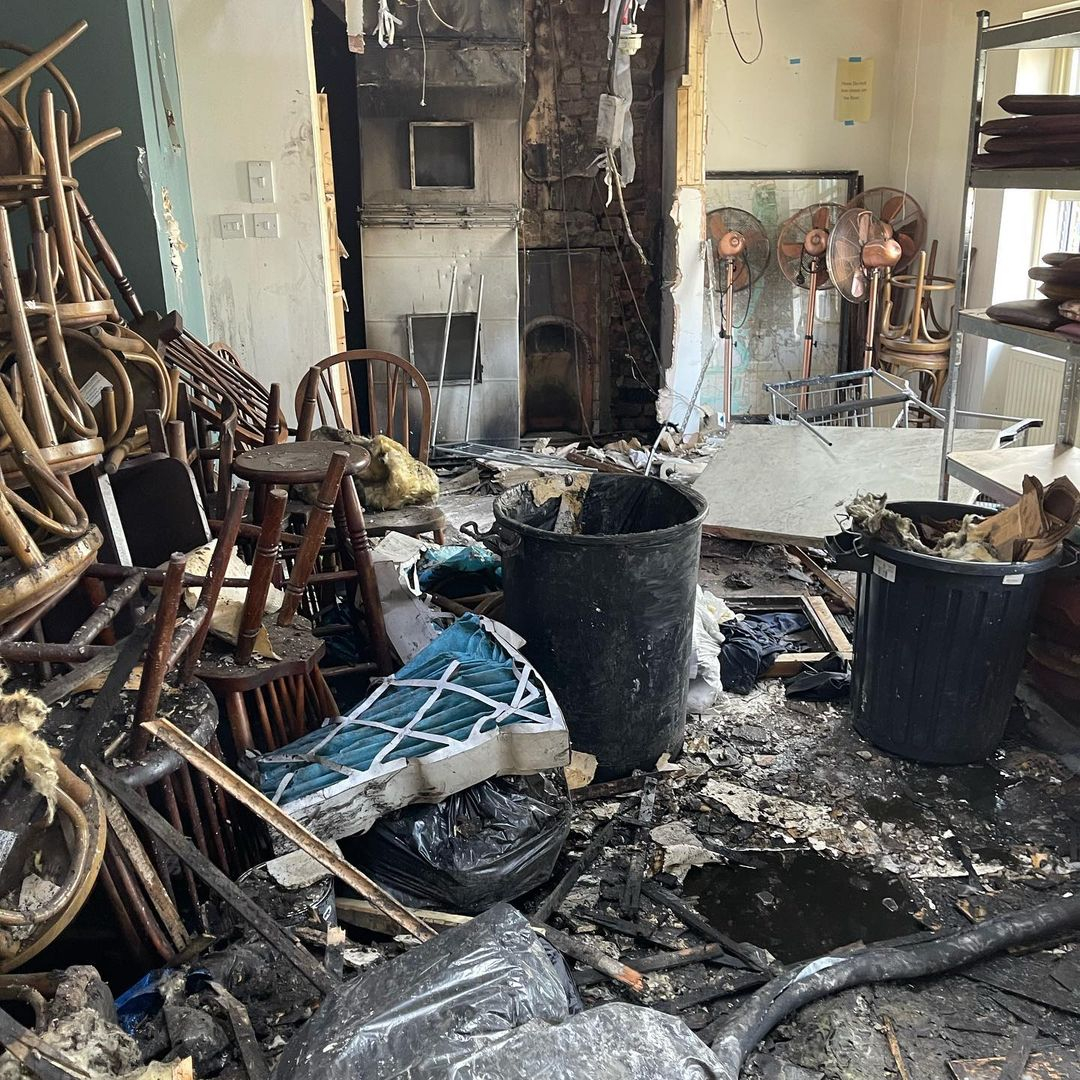 The photo was paired with a video of smoke billowing from the windows of the pub.

Fire crews rushed to the Fitzrovia pub on Wednesday, around lunchtime, following reports of a blaze.

The photo posted by Ritchie reveals part of the pub’s interior is blackened, with electrical cords hanging from the ceiling and charred chairs piled up, covered in dirt and soot.

Ten fire engines and around 70 firefighters spent hours tackling the blaze, while Conway Street, along with nearby road Grafton Way were closed off to the public.

Ritchie arrived at the scene around 4.30pm, where he spoke to firefighters and police officers.

He was said to have appeared "calm" as he was told of the damage.

The pub is owned by the Fat Boy Pub Company, of which Ritchie is listed as director, and opened just last year.

As well as the pub, Ritchie owns a brewing company, Gritchie Brewing Co, which brews beers using barley grown on the Wiltshire/Dorset border.

The brews were on tap in the Lore of the Land pub.

Pub manager Kit Kitchener said: "I can’t say too much – we have to let the guys do their thing.

"We are not going to open tomorrow. The only thing that matters is that no one was hurt."

A kitchen worker at the pub, Bidssa Imlria, who had worked at the restaurant for three months, said: "The pub was on fire when I got here but the fire definitely started in the kitchen. We don't know when we'll be allowed back in."

One local resident said: "There were huge plumes of black smoke coming from the roof from around 11am.

"There was a man on the terrace next to it having a cigarette and just watching." 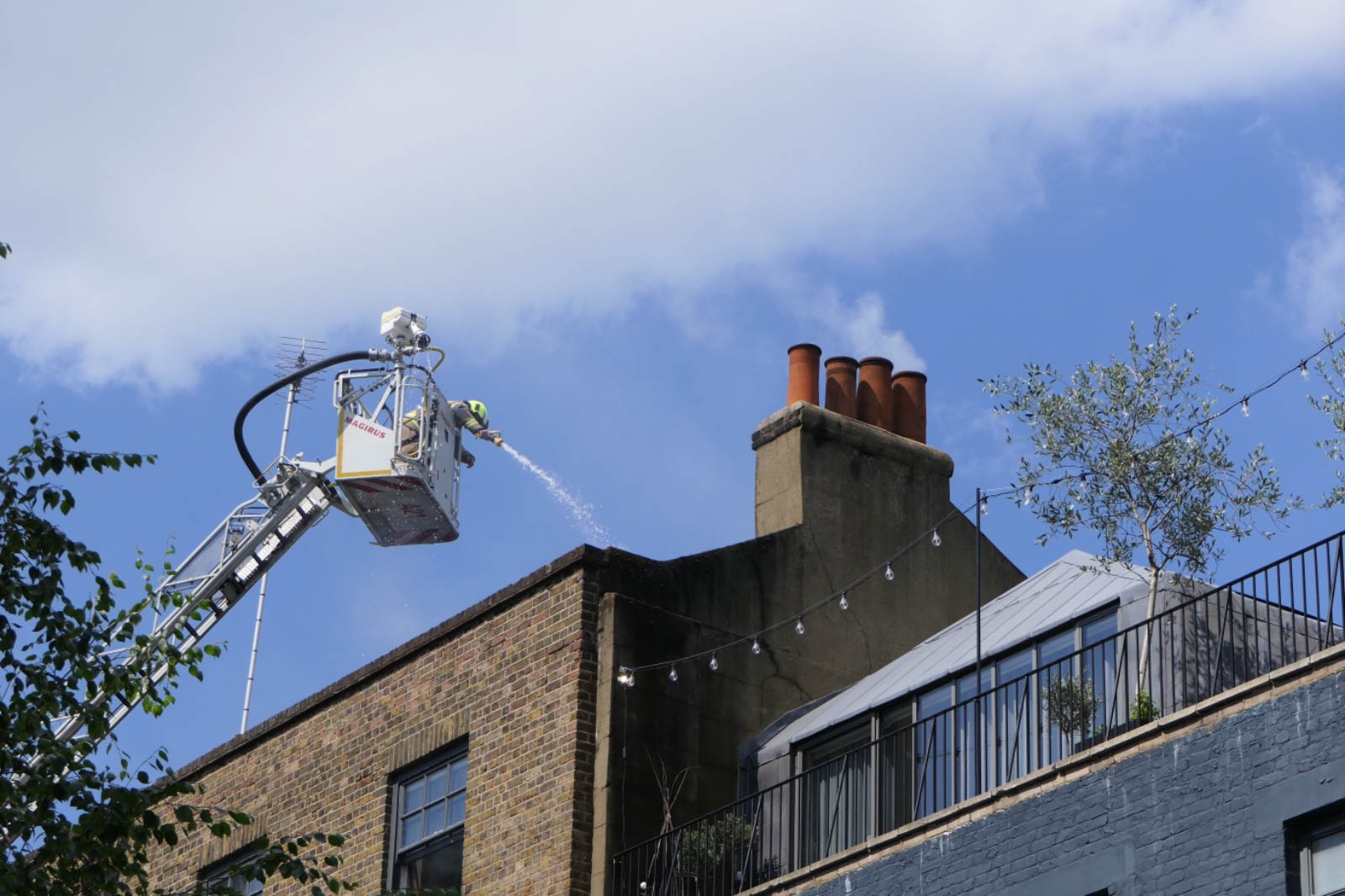 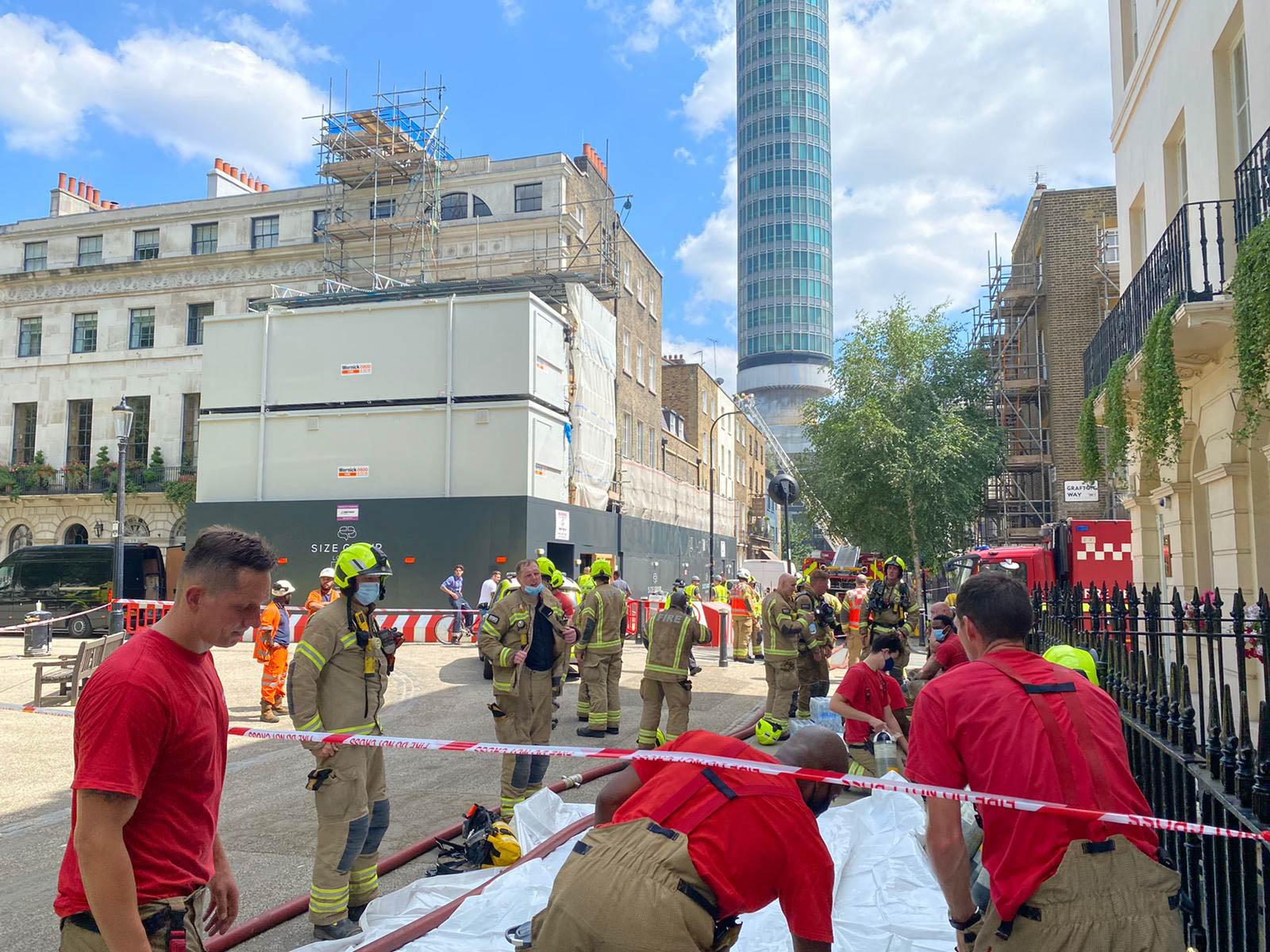 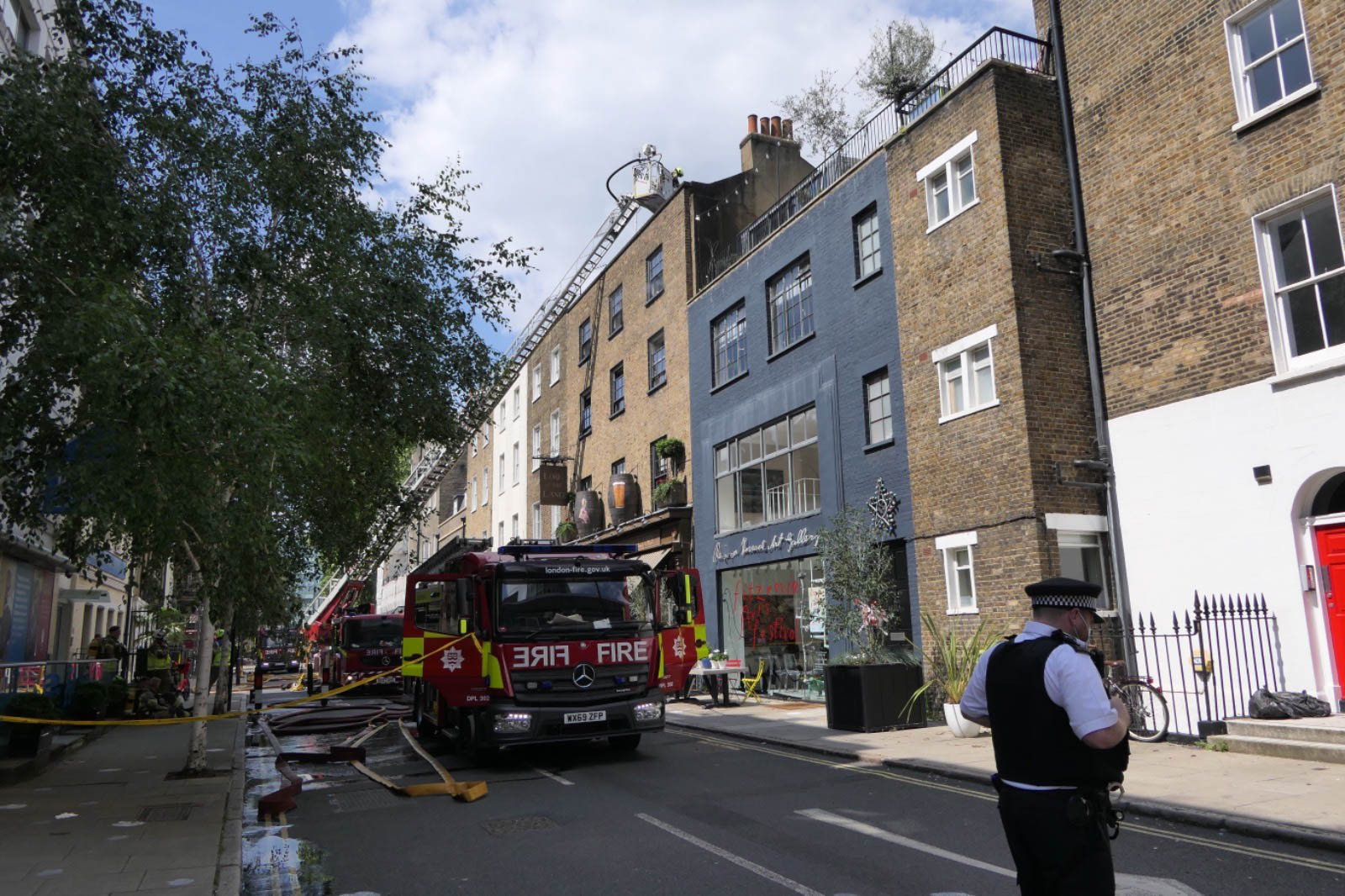 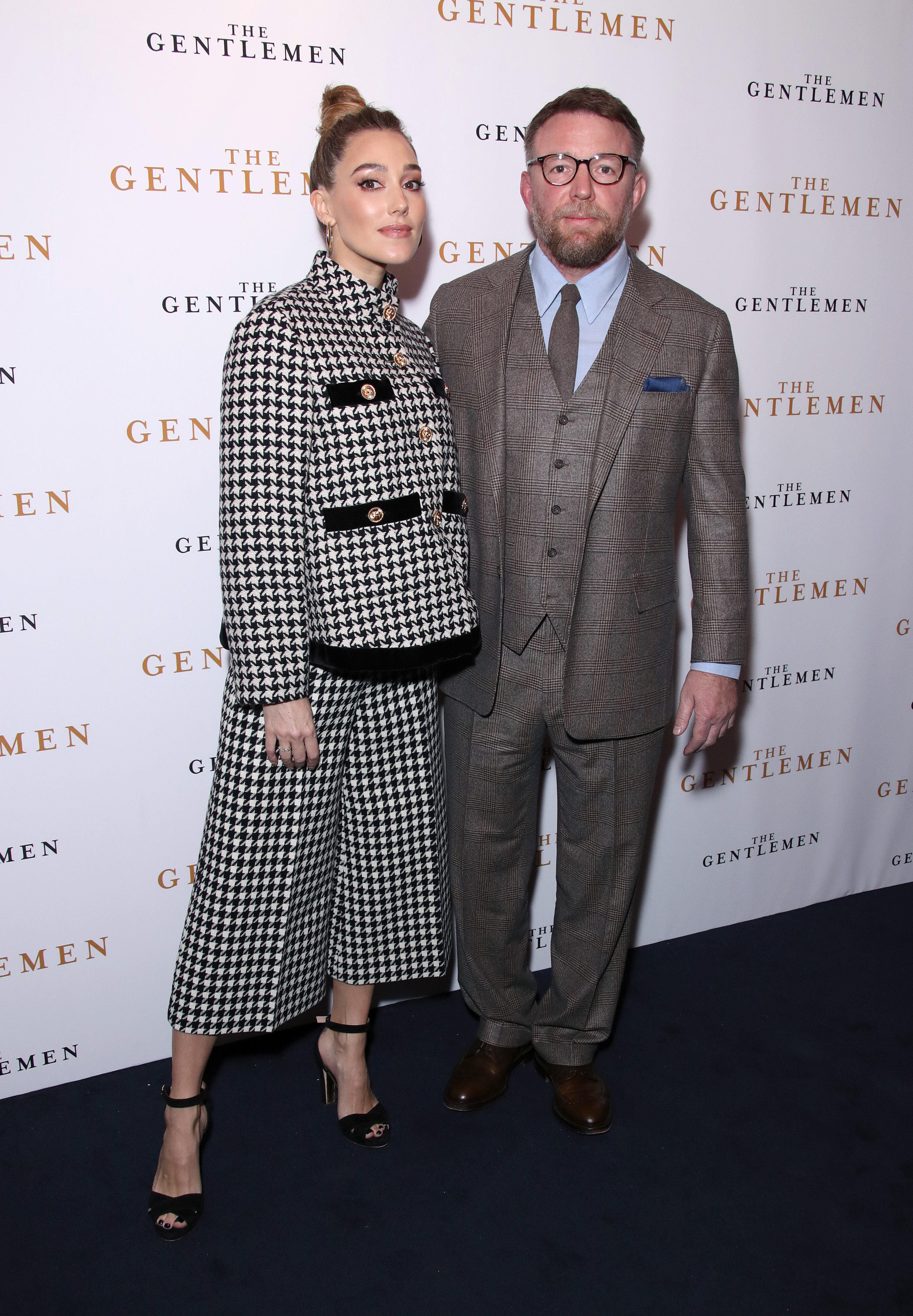 Another added: "I walked past earlier and it was all crazy then. There were so many blue lights.

"It must have been a big fire for them to have been here so long.

"The pub has been open recently, but I don’t think anyone was there when the fire started as it was too early."

According to a spokesman for London Fire Brigade, the location of the fire, which was inside the extraction system and was believed to have started in the kitchen, meant a substantial amount of manpower was needed to battle the blazer.

Jason Fischer, Station Commander, said: "The fire is within the extraction system from the first floor to the roof vent.

“There are no reports of any injuries.

"Access to the seat of the fire is challenging and very labour intensive. The number of fire engines at the scene is a reflection of the need for a high turnover of firefighters wearing breathing apparatus.

"Firefighters are carrying out salvage work and trying to prevent water damage on the floors below."

The cause of the fire is under investigation.

Ritchie is well known for his work as a director, specialising in British gangster films such as Lock, Stock and Two Smoking Barrels,

Mr Ritchie is known for his work as a director specialising in British gangster films.

His work includes the films Lock, Stock And Two Smoking Barrels, Sherlock Holmes and The Gentlemen.

The director hosted a wrap party for film Wrath of Man at the pub in November.

He wrote at the time: "‘Last year I spent a great Thanksgiving with some of the Wrath Of Man cast @loreofthelandpub.

"This year looks a little bit quieter. Wishing my American friends a happy Thanksgiving, no matter how and where they’re celebrating."

He previously owned a Mayfair pub, The Punch Bowl, while he was married to Madonna but sold it in 2013.

The Sun revealed in February how Ritchie left taxpayers footing his bar bill by using furlough cash to pay staff – despite being worth £100million.

Martin Scorsese Is A Bit Worried About ‘Irishman’ De-Aging VFX: ‘We’re All Concerned’