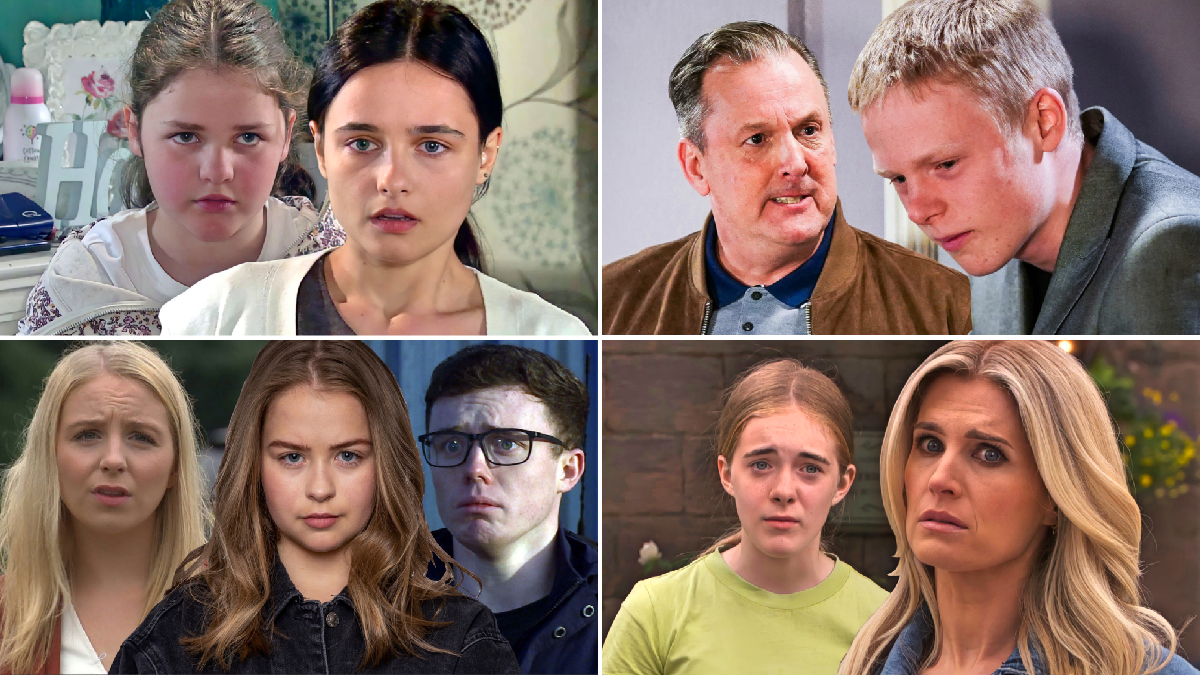 There are shocking secrets revealed in the land of soap next week, leaving several characters well and truly speechless!

Alina Pop (Ruxandra Porojnicu) reels in the wake of her miscarriage in Coronation Street, and she wants answers, believing that Fiz Stape (Jennie McAlpine) had a role to play in the fire, forcing Tyrone Dobbs (Alan Halsall) to real the truth.

But is all as it seems?

And there is panic aplenty over in Hollyoaks, as Ella Richardson (Erin Palmer) struggles to adjust to life back in the village, and following a row with mum Mandy (Sarah Jayne Dunn) she decides to run away from home!

It’s all kicking off in the land of soap next week, that’s for sure, but don’t just take our word for it: here’s all the must-see moments that your favourite serial dramas have to offer.

1. Shona reveals to David that she went to move his car, but in the process, she hit something. David, shocked, accompanies her to check for evidence, but failing to find any, they conclude it’s nothing to worry about. That is, until they discover Todd has been the victim of a hit-and-run! Abi, who assisted in mending the car, reveals she won’t say anything, but questions are soon asked and David is arrested! Todd, meanwhile, recovers in hospital, claiming to have no memory of the accident.

2. Asha offers to help Nina with the fund-raising for Seb’s memorial garden, and sells her new laptop to raise money, much to Dev’s dismay. Nina confronts her when she finds this out, forcing Asha to admit she’s still got feelings for her. Abi, meanwhile, is non-plussed about the idea of a memorial garden, and when she sees a mural of Seb on the wall, she’s deeply insulted. And later, the memorial garden is ransacked, much to Nina and Roy’s horror!

3. Tyrone tells Evelyn and Alina that Fiz and Hope have gone to stay with Cilla, but Evelyn knows there’s more going on than meets the eye, and he eventually comes clean about everything. Alina, meanwhile, wonders if an old face from her past could’ve started the fire, but after confronting this Rachel, she’s not so sure. Matters are complicated further when Alina finds out that Tyrone lied about Fiz’s whereabouts, and when she sees Fiz return home, she takes shocking action. As Fiz is helped into a police car, Tyrone reveals the truth to Alina, leaving her in shock!

4. Leanne tells Toyah that while Nick has signed them up for all sorts, she’s not really enjoying being a lady of leisure, and Nick later tells Toyah that he’s not really enjoying it either! Toyah assists them in coming clean to one another, and Leanne has a plan for their next venture, suggesting to Nick that they make Debbie an offer on the bistro. Nick is won over. Debbie, however, reckons their offer is too low, and offers to sell them 50%, but when Leanne hears for how much, she tells Debbie to whistle for it!

5. Daisy wastes little time in stirring things with Alya when she and Ryan head to Speed Daal, as she criticises the food. What’s more, she makes it clear that she got together with Ryan as soon she finished things with him. Ryan storms out, and later apologises to Alya for any hurt he caused. Daisy is gutted to realise he still holds a candle for her.

6. Daniel orders a bottle of champagne and celebrates, having learned that his mum has given him a house. Daisy is impressed, and looks at him in a while new light. Ryan heads off to a gig, and Daisy takes the opportunity to flirt with him, complimenting his photos of Bertie, as she claims she loves kids. Ryan’s return prompts Daniel to head out, and Daisy watches him go, wistfully.

7. Mary persuades Billy to help Todd find a job, reminding him that if he doesn’t, Todd could end up in prison! Billy, thinking long and hard about it, relents, and assists his ex, but he makes it clear that they won’t be working together, as he’d made sure they’re on different shifts. Todd then realises that he’s got a long way to go before Billy would consider forgiving him.

8. Harvey moves into Albert Square, and Terry and Kathy give him a hand to do so. Kathy mentions it’s the Islamic New Year, making Dana and Bobby nervous. Bobby invites Dana to mosque, and attempts to convince her that they should tell Harvey the truth about him, but the choice is soon taken out of his hands, as Terry tells Harvey all about how Bobby converted to Islam. Harvey is livid, while Kathy is fuming with Terry.

9. Ben is threatened by a loan shark in scenes which Vi and Callum witness. Callum wants to know what’s going on and demands the truth. Ben is having cash flow problems, and when he finds out his dad is leaving for France, he goes to see him, before asking for help. Phil refuses. Vi, meanwhile, discusses Ben’s money issues, carelessly telling Kathy everything. Little do they know, however, that Kheerat is listening in.

10. Karen becomes worried about the way Chelsea views her grandchildren, and when Whitney pops by with a present for Mia, she explains that things are still a bit awkward with Gray. This prompts Karen to meddle, and soon enough, Gray and Whitney have been set up! Gray encourages Whitney to see the kids whenever she wants. Chelsea skips Mia’s party after she wins her court hearing. And when Gray puts mote effort into Chelsea than he does Mia, Karen has a word with him!

11. Keegan’s guilt intensifies, while Dotty explains that she’s not comfortable lying to Tiffany about what they did.

12. Bobby and Iqra hand out flyers for a new prayer room, but Waseem, a friend of Bobby’s, has a problem with the prayer room potentially being next to a bar that’s LGBTQ+ inclusive. Iqra, not pleased, defends her faith and sexuality to Waseem, in front of the social worker that Mila is trying to impress. Later, Mila and Iqra await news, hoping that Iqra’s outburst hasn’t jeopardised things.

13. Martin, however, is shocked that Ruby is hellbent on helping Jean, but Ruby is simply trying to put good vibes out into there universe. Jean, meanwhile, is shocked to discover large sums of money in her bank account, and sets out to confront Ruby, as she doesn’t want to be seen as a charity case. Jean hands the money back to Ruby, who opens up about her hospital appointment. And later, Ruby makes a huge confession.

14. Phil decides to head off abroad to see Louise and an injured Lisa. He leaves Kat in charge of his house while he’s away, much to her delight. Kat, however, soon has other things on her mind, when she discovers something on her phone.

15. Juliette drops yet another bombshell, leaving Jimmy and Nicola stunned. The former couple are forced to break thew news to Carl, hoping that they’ve done enough to assure him he’s both wanted and safe. Things take a turn, however, prompting Jimmy to make the decision to move back in. He claims it’s only for Carl’s sake, but will romance blossom once more for he and Nicola?

16. Mandy warns Liv to stay away from Vinny, which ends up motivating Liv to give up the booze. But Mandy’s desperate to keep her away, stealing Vinny’s phone, and pretending that he’s blocked her number. What’s more, the worried mum tells Liv that Vinny is taking Belle out for a drink, claiming he needs to be with someone normal. The truth comes out, however, when Liv confronts Vinny, and they realise Mandy has been meddling.

17. Liv invites Jacob over, and suggests that he choose the movie for them to watch. She knocks back the vodka for courage, evidently wanting to forget about Vinny. Afterwards, she suggests that Jacob join her upstairs, and starts to undress! Aaron walks in and catches her, leaving her mortified. One thing leads to another, and Aaron kicks her out!

18. Charity is seething when she finds out that a delivery of smart watches has gone missing, and she’s quick to point the finger at Mackenzie, who denies all knowledge. However, it’s clear that Mack was involved, and Ryan later spots him stashing a holdall. Charity, meanwhile, breaks into Tall Trees to snoop, but Mackenzie catches her in the act. But he’s left relieved when she goes to the cupboard containing the holdall, only to find out that the holdall is not there. The question is: where is it?

19. April is delighted when Marlon returns her phone. She promises that she will not use social media, but it’s clear that she’s soon tempted to do so. She’s determined to find out who is responsible for the trolling, and Cathy has a suggestion that could help.

20. Sarah is crushed when her donor family do not want to speak to her. But she’s got an idea, as she tries other routes to track them down, pleading with Noah to keep shtum about her mission.

21. Ella is struggling to adjust to life back in the village, while Nancy keeps her return from Charlie. Charlie, however, discovers that Ella is out of prison, and they’re caught meeting up, prompting Nancy to ban him from seeing his pal. Ella, meanwhile, lashes out at Mandy when she organises a covert meeting with Charlie, but Mandy retaliates with some harsh words! Ella later vanishes, leaving Mandy sick with worry!

22. Worried she’s losing her grip on Sienna, Summer returns home claiming that she’s been attacked by Brody, insisting that this isn’t the first time it’s happened. Damon, horrified by Summer’s accusation, tells Sienna to wake up, suggesting that she’s being gaslighted by her girlfriend. Sienna is shocked by Damon’s theory, and subsequently confronts Summer on the matter. Liberty, meanwhile, leaves a clue which Sienna finds, and she’s delighted to know her sister is alive. Oh, and Brody makes an impromptu return as well!

23. Cindy gets a text from an anonymous number, asking to meet up. It’s from Ollie, and she gets quite the shock when she realises such a thing. Ollie is need of some cash, and he doesn’t want his dad to know he’s back, but when Cindy tells him about Sue’s death, he has a change of heart.

24. Cindy discovers Sue was writing to a man in prison. And when she and Zara discover the identity of this man, they’re left in shock. Cindy resolves to burn the letters and, given the identity of the inmate, Zara agrees, as she knows how much this would hurt Luke. But Luke makes a discovery for himself, and soon he’s on a mission to find the person that Sue was visiting.

25. A mystery necklace comes through the letterbox for Peri, which proves very disconcerting. Ste, therefore, fast-tracks his plans for CCTV around the house, and Fergus complies with his request, sending Timmy round to sort. Ste and Timmy later watch the footage back, and they see James and John Paul agreeing to keep their lips sealed about what happened between them!

Lord of the Rings Amazon Prime release date, cast, trailer, plot: When is the series out?