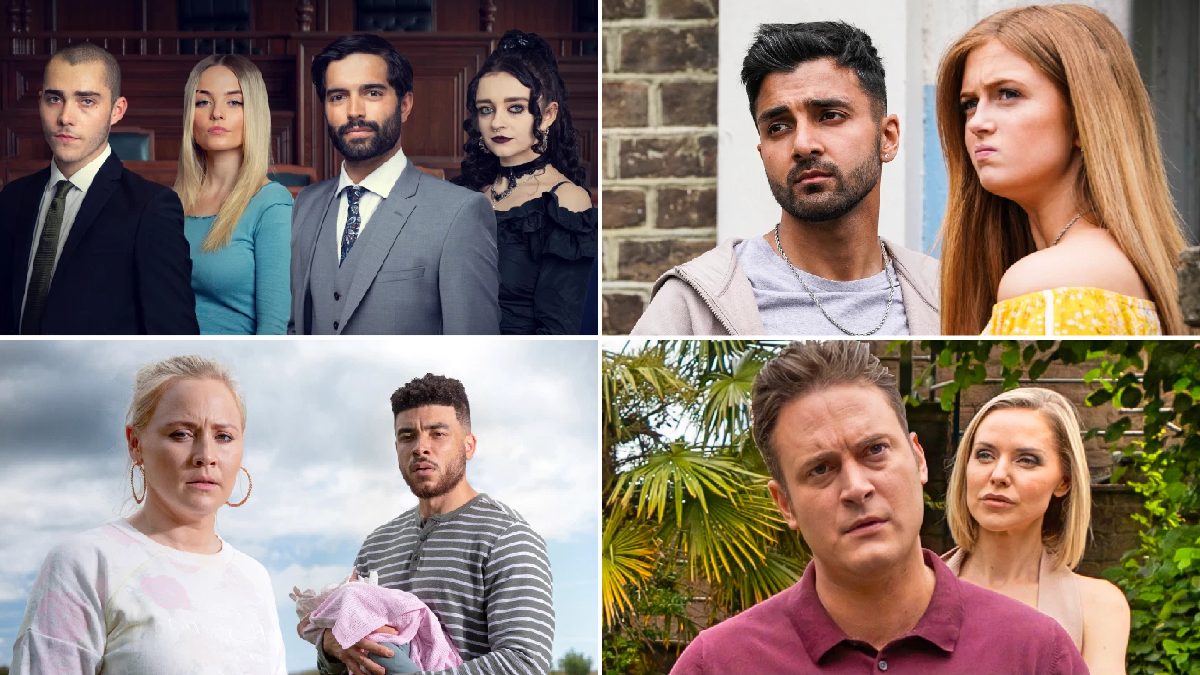 Some face the music, while others face heartbreak in what we predict will be one of the finest weeks for the soaps this year.

Coronation Street, of course, is the main attraction, as the moment fans have long been waiting for finally arrives: Corey Brent (Maximus Evans) and Kelly Neelan (Millie Gibson) stand trial for their role in the death of Seb Franklin (Harry Visinoni).

But what will the verdict be? And who will be blamed for the murder?

Vinny Panesar (Shiv Jalota), meanwhile, comes up with an idea to get back at Keegan Butcher-Baker (Zack Morris) in EastEnders, while Suki (Balvinder Sopal) grows closer to Honey Mitchell (Emma Barton).

Emmerdale sees Tracy Metcalfe (Amy Walsh) struggling, and she makes a huge decision as she decides to leave the village, while Cindy Cunningham (Stephanie Waring) receives a surprise visit from Luke Morgan’s (Gary Lucy) aunt Lydia in Hollyoaks, and she brings with her some advice.

It’s a week that will change everything for a lot of our soap favourites, and here’s a list of the 25 moments you need to see!

1. Fragments of Nina’s memory resurface on the eve of the trial, and she decides to retrace her steps, as she accompanies Asha, Summer and Abi to the wasteland where the attack took place. A series of reconstructed scenes will take viewers back to the night of Seb’s death, and the truth about what really happened is at last revealed. Nina bursts into tears, having remembered her final moments with Seb, vowing to go to the police and reveal all.

2. Corey, alone in his cell, reflects on the aftermath of Seb’s death, thinking about how he ducked into a ginnel to change into fresh clothes from his rucksack, before stuffing the blood-soaked tracksuit back inside, and stashing it in a hiding place. He subsequently returned for it, and tossed it into the canal.

3. Nina signs her new statement, hoping it will get Seb the justice he deserves. As the trial commences, Roy urges her to readopt her goth look, and she takes to the stand, telling the court the truth. Sabeen questions her about the reconstruction she staged, and does her best to discredit her friends. Nina loses her temper, leaving Imran worried.

4. Abi rails at Stefan, suggesting that it’s time Corey came clean. Corey, meanwhile, takes to the stand and proceeds to lie through his teeth, claiming that Kelly viciously attacked Seb and that he tried to stop her. To make matters worse, he claims that Kelly threatened to have him killed if he reported what happened to the police.

5. Hope’s first therapy session commences, and she opens up about why she started the fire, explaining that she felt sad when Ty left the family home, as people are always leaving her. Alina, meanwhile, books a trip to Romania so Tyrone can meet her family. But Ty cannot leave Hope at such a crucial time.

6. George chases Todd in the hopes of retrieving Phelan’s ashes, but Todd trips, and sends the ashes flying everywhere, just as Eileen arrives!

7. Curtis reveals he’s got a hospital appointment to get his results, and Emma offers to go with him. But he suddenly collapses, and an ambulance is called. The doctors want to run more tests, but Curtis reckons it’s a waste of time. Emma, meanwhile, has a big announcement.

8. Gray receives a shock when boss Laura stops by with a HR rep to inform him that, follow the caution he received last month, he has been sacked! Chelsea, meanwhile, has been spending his money, and she brags about it, leaving Gray livid. Chelsea is not in the least bit bothered, which only infuriates Gray further, and in shocking scenes, he approaches Shirley, claiming that he saw Tina on a bus!

9. Shirley vows to do whatever it takes to find Tina, telling Mick that Sharon and Phil are going down for their involvement unless they confess the truth about their plan with Ian. It’s not long before Phil is faced with an angry Shirley, who demands that he hand himself in to the police. She pleads with Sharon to do the same, as does Linda. Sharon wants to go to the police, but Phil reminds her that she could face time in prison, before warning her not to do anything stupid. But it could be too late, as he’s unable to get a hold of her!

10. Suki invites Honey over for dinner, and the two evidently enjoy one another’s company. That is, until Ash interrupts, leaving Suki fuming with jealousy! She softens when she learns Ash failed her performance review, and feeling guilty, she offers to expand her empire by purchasing a property to turn it into a GP surgery. Ash is angered by her mum’s proposal, but Honey soon has a word with her. Honey gets all dressed to the nines for the Pride of Walford Awards, as does Suki, who Honey invited as her plus one.

11. Zack is upset after Peter rejects his business pitch. He relays this rejection to Nancy, who suggests that they go into business together, leaving him in shock. It’s clear that Zack is riddled with guilt over the thought of using Nancy’s money, and therefore he declines her proposal. Nancy, however, isn’t taking no for an answer, and Mick is left fuming. The Queen Vic landlord confronts Zack, and punches him!

12. Isaac returns to the Square, and Sheree informs Patrick that she’s booked two tickets for her and Isaac to go to Trinidad. Isaac, however, refuses to leave! Sheree is insistent that her son needs to leave, and she takes drastic action! Patrick then suggests that perhaps Trinidad is the best place for them, and even offers to accompany them, much to Sheree’s pleasure.

13. Kat attempts to overcompensate for Tommy’s affection, but she’s once again forced to explain to him that she simply cannot look after Scarlett. Her attempts to bond with her son have little to no effect, as he insists that she help Scarlett, who has a court hearing, which could result in her being placed anywhere! Tommy, meanwhile, visits Martin, asking about Alfie’s whereabouts, as he thinks he’ll be able to live with Alfie and Scarlett.

14. Vinny sees a sad Tiffany and invites her for a drink. Later as they hug goodbye, Vinny sees an opportunity to get back at Keegan.

15. Tracy, vacant and detached, is waiting at the bus stop when Faith spots her. Returning home, Tracy tells Nate she’s staying the night with Priya, and heads off in a taxi, making it clear she’s not coming back. Nate is left concerned the following morning. Faith, meanwhile, locates Tracy, who is lost in thought searching for her dad’s tree. Tracy can’t help but reveal her delusions to Faith, as she oscillates between severe paranoia and an eerie calmness. Faith becomes convinced that Tracy has got postnatal depression.

16. Meena breaks into Victoria’s and starts to mess with her things, grabbing a nearby paperweight to use on the young woman when she enters! Victoria, however, discovers someone is in her home and calls the police, forcing Meena to make a quick getaway. Manpreet, meanwhile, begs Meena for help when she discovers Aeisha is in a critical condition abroad, but Meena struggles to tear herself away from keeping an eye on David and Victoria. David tries to convince her to support her sister, but the paperweight soon falls out of her bag!

17. Ethan is worried after Eddy reveals that he is HIV positive. Charles queries Ethan about what’s bothering him, after noting his son’s mood. But will Ethan be able to open up about what’s on his mind?

18. Leyla believes that she’s having a miscarriage, but her focus remains on protecting Liam.

19. Seeing how much Liv is struggling with her recovery, Laurel offers her some encouragement.

20. Matty finds Ryan’s counterfeit aftershave and confronts him. Charity, meanwhile, starts to suspect they’re up to something, and thus wastes little time in interfering.

21. Luke is adamant that The Hutch can be saved if he and Tony work together, and he comes up with a plan. When Plan A fails, he resorts to Plan B, suggesting to Tony that they stage a robbery for The Hutch’s insurance money!

22. Lydia, Luke and Zara’s aunt, comes to stay, and gives Cindy a lot to think about regarding Luke’s condition. Cindy, however, is heartbroken when Lydia later reveals that Luke is exhibiting behaviour that her husband had six months before he died.

23. Cleo struggles to keep a lid on who attacked Walter, telling Joel that they should come clean. Joel retaliates by questioning the stability of her relationship with Toby, but Cleo resolves to tell Toby about the kiss they shared. She attempts to do so, but reconsiders at the last moment. Joel, however, thinks she told her boyfriend the truth, and therefore he puts his foot in it when he apologises to Toby.

24. Marnie lets Juliet do extra work in the café for her CV. Marnie, however, ends up slipping on the mopped floor! Misbah runs to her aide, but a mystery man interrupts and dishes out his own medical opinion. Marnie connect the dots and Misbah admits that the man is Shaq’s dad, Ali.

25. Cher receives devastating news, and afterwards, she’s stunned when a family member covers for her. Can she be redeemed after all?