CORONATION Street's Sinead Tinker has some big decisions to make in the Cobbles this week as she begins palliative chemotherapy for her terminal cancer.

In tonight's double-bill she’ll be seen arranging a visit to a hospice as she tries to decide where to spend her final days on the ITV soap.

But fans will see Sinead's husband Daniel tell her that he wants to care for her at home until the bitter end.

Sinead also promises Daniel that any decision on where she spends her final days will be in the best interests of him and Bertie.

However, when she gets home from her chemo session, Sinead is exhausted.

Devastated, she throws up into a bucket while baby Bertie is heard screaming alone in his room.

As the week goes on, the newly-wedded couple are forced to make some even tougher decisions.

When Sinead’s aunt, Beth, tells Daniel that Sinead is so poorly she can’t even hold her own baby, he is given food for thought.

With Beth’s words on his mind and – when Sinead wakes up too tired and weak to hold Bertie – Daniel suggests that she stops chemo.

A horrified Sinead flies off the handle and accuses her husband of wanting her to die sooner because he can’t cope.

While Daniel heads into work to avoid the atmosphere at home, Sinead confesses to Beth that she’s going to give chemo one last try and if it doesn’t make her feel any better, it will be her last. 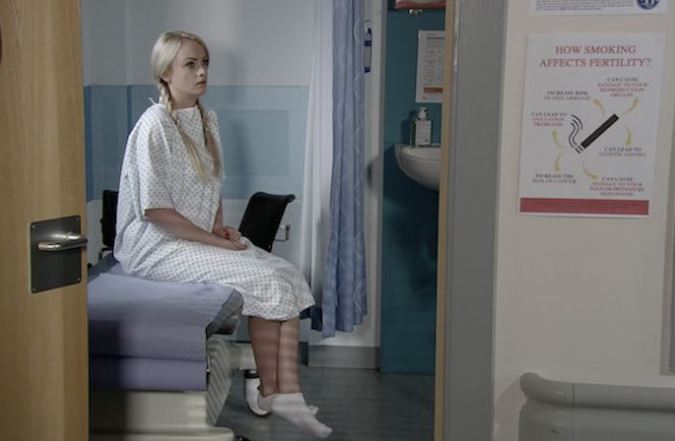 Meanwhile actress Katie McGlynn has confessed that Sinead’s tragic storyline has given her a lust for life.

Speaking about the storyline, Katie told Daily Star: "It has made me realise that time is precious.

"You can’t take any minute for granted because you never know what’s around the corner.

"A plot like this gets instilled in your brain and makes you grateful to be here."

Sinead found the lump on her wedding day before doctors confirmed she had just months to live.

The actress told Philip Schofield and Holly Willougby on This Morning that she sobbed through her last scenes.

She said: "It's heartbreaking, but it's real life. When we were doing scenes that day, I thought that I can't imagine this happening to me.

"Deep down [Sinead] knows [about her cancer], but she makes sure she enjoys her wedding, she's so brave."

The star also said she told bosses she wanted her to die: "I was talking to [Corrie bosses] Iain [MacLeod] and Kate [Oates] about this story.

"I told them that I think I might want to leave due to not having a big storyline, but when I was given this, I told her that I want her to die as life isn't a fairytale."