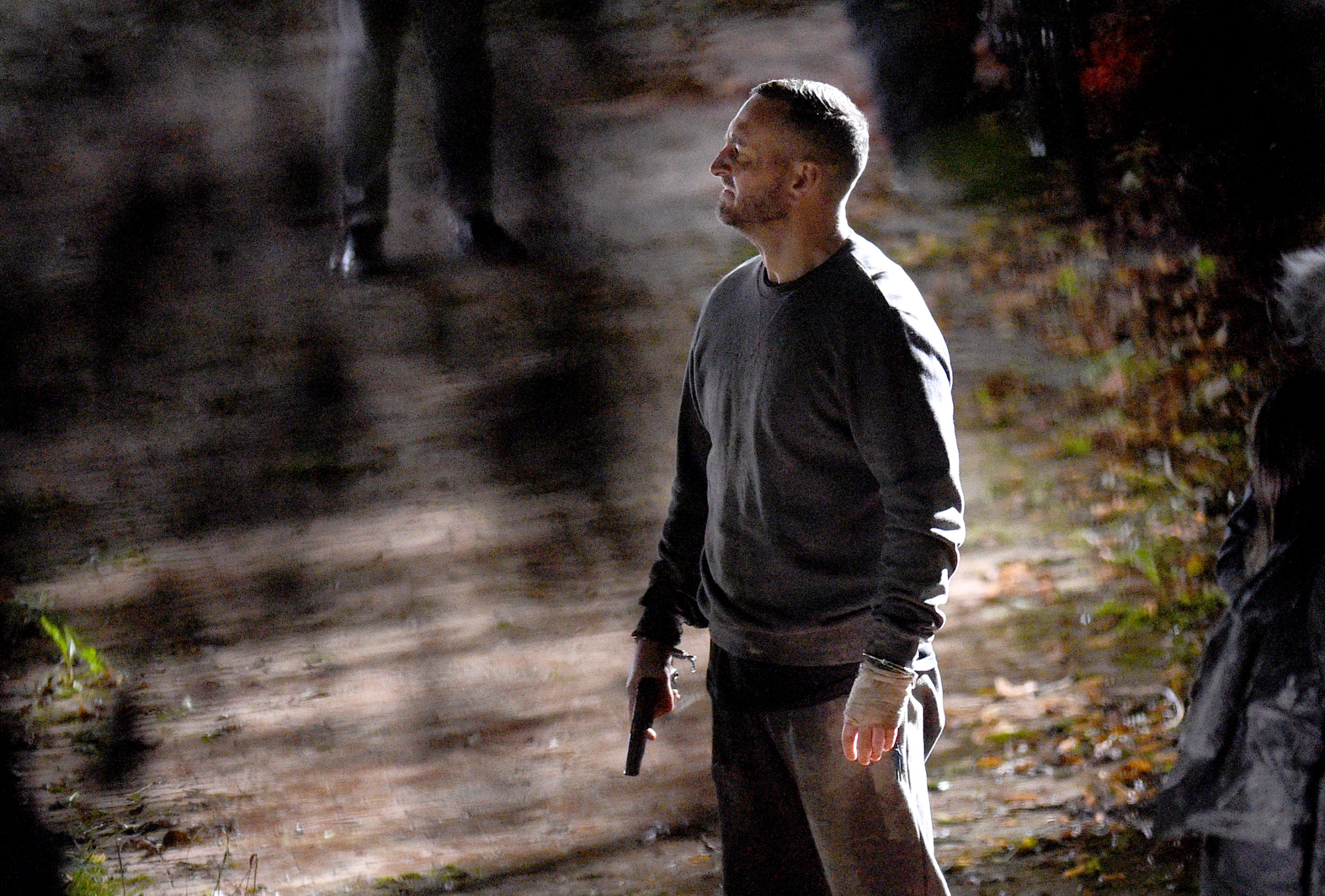 Pictures from the set of Coronation Street ahead of ITV’s Super Soap Week show villainous drugs baron Harvey Gaskell (Will Mellor) armed and on the loose.

The escaped prisoner is seen making his way along the riverbank in the dark with a gun, before encountering a cyclist.

In broken handcuffs and a prison-issued grey tracksuit, Harvey is seen looking hellbent on revenge and brandishing his gun at a shocked passing cyclist in the dark.

As the rain begins to pour, the pair have a confrontation and the injured criminal is seen on his hands and knees on the ground – but still in possession of his weapon. What has he done?

Will Mellor was first pictured filming new scenes in August for the ITV soap, which confirmed that he would be back.

Harvey’s name was also mentioned again for the first time since he left on Corrie on September 27, as the Imran and Sabeen blackmail storyline kicked off with her trying to recruit him to work on the convicted criminal’s appeal case.

With the evil thug on the run and back on the cobbles, it’s clear that his mission for revenge will put Leanne Battersby (Jane Danson) in great danger after she gave evidence against him in court.

Desperate to save both herself and her son Simon (Alex Bain) after he got sucked into Harvey’s criminal underground, Leanne reported Harvey to the police and, after working alongside DS Glynn, ultimately saw him arrested.

The soap mainstay, however, was then forced into hiding after Harvey made a threat against her and Nick Tilsley’s (Ben Price) family, but despite her fears and concerns, she turned up to court and gave evidence against him.

Despite moving on with her life since then, and recently buying the bistro with Nick, it’s safe to assume Leanne’s happiness is about to be shattered by the return of a vengeful Harvey.

Jane Danson, who portrays Leanne, weighed in on the upcoming scenes, teasing the possibility of Leanne meeting her demise at the hands of the villainous drugs lord.

‘This is really difficult but it’s safe to say he’s not going to come out happy, Leanne has definitely got to watch her back,’ she told The Daily Star.

‘Could she die? I mean I hope not ‘cos it would be the end of my job. But anything can happen in the soap world.’

Will Harvey manage to make his way to Leanne for revenge without being stopped? And can Leanne protect herself against an armed and extremely dangerous Harvey?