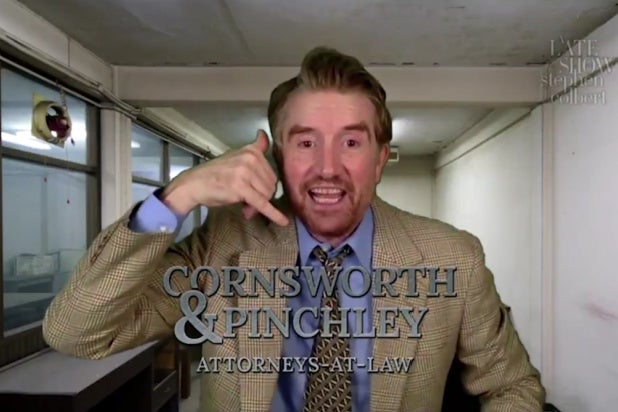 Having repeatedly broadcast his intent to challenge the presidential election that he resoundingly lost to Joe Biden, Donald Trump is in need of all the lawyers he can get to file frivolous lawsuits making nonsensical claims about alleged voter fraud and not providing any evidence of said claims. And “The Late Show With Stephen Colbert” invented just the law firm to help him destroy American democracy and pull off this coup attempt.

This is all a joke, of course, originating in Tuesday’s edition of the cold open sketches that begin each new episode of “Colbert.” The skit takes the form of a local TV commercial, as these often do, with “Colbert” writer Brian Stack starring, as he often does.

“Did you lose an election and are desperate to overturn the results but no one will take the case because they still love their country? Then call us at Cornsworth & Pinchley, Attorneys-at-law,” Stack says to get this fake ad going.

The “Colbert” sketch then presented some video testimonials from past “satisfied customers.” We then got videos of three foreign leaders, speaking in their local languages, with a jokingly mistranslated dub.

Russian president Vladimir Putin: “Roger Cornsworth is my lawyer for life because he made me president for life.”

North Korean supreme leader Kim Jong-un: “I received two votes from my uncle. One from him, and the other from the dog I fed him to.”

And Philippines president Rodrigo Duterte: “If it wasn’t for Roger Cornsworth, Filipinos would be parading through the streets with my liver on a stick.”

Stack ended the “Colbert” cold open with an ambitious promise.

“We won’t stop till you’re democracy is a pile of ash and your ego is soothed.