BBC Breakfast weather favourite Carol Kirkwood had broadcasted all morning from Hampton Court Palace to give the lowdown on the forecast ahead for Tuesday. During Carol’s later updates, she gave a focus on ghost stories from the historic location as she got hosts Dan Walker and Louise Minchin in the mood for Halloween. But after the tales from the past seemed to have Carol well and truly spooked, the presenter ran off-screen before things had completely come to a close, telling the hosts: “I’ll see you tomorrow – bye!”

Carol had been at the famous Tudor palace since the beginning of Tuesday morning’s instalment.

And throughout the morning, Dan and Louise had continued to go to her in order to give viewers insight on today’s forecast.

In her last broadcast of the morning, Carol was joined by a guest named Sheila Dunsmore – who worked at the Palace.

She read a chilling ghost story to Carol before the presenter got on with giving the outlook for the day ahead. 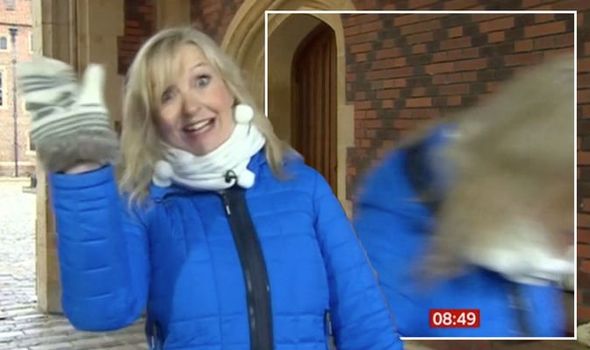 And just before she brought the latest update to a close, Carol said: “Strong gusts of wind and some very large waves, with exposure in western areas…

“The west of the outer Hebrides… five to ten metres high – and then the unsettled theme continues.”

However, she went on to add: “Talking of unsettled, I am high-tailing it out of here, I’ll see you tomorrow – bye!”

Carol ran off the screen, with a bemused Louise remarking: “Carole’s been scared off, thank you, Carol, it’s been really enjoyable from here!”

Dan was also left baffled by his co-star’s move after she failed to return to the screen.

The host told viewers: “I don’t think I’ve ever seen Carol sprint off for the end of the weather!”

And realising she wasn’t coming back, he said: “Right that’s it, she’s gone! Anyway, we don’t need Carol, we’ve got Bananarama!”

The pair got on with the programme, moving on to speak about much-loved 80s pop group, Bananarama.