The recurring, definitive image on television screens so far this year is of ash falling from the sky in the wake of catastrophic events. It occurs in Game of Thrones, where the fiery blast of a dragon’s attack levels a medieval city, and it’s also prominent in Chernobyl, the new HBO series about the disastrous accident at a Soviet nuclear power plant in 1986. The two shows couldn’t be more dissimilar, but the fantasy epic and the historic procedural both suggest the same outcome: the calamities we cannot comprehend have begun.

Apocalyptic events are becoming the favoured foundation stone for showrunners; they’ve seeped into the subtext of television’s commentary much as the fallout from Chernobyl entered the food chain. A zombie outbreak destroys society on The Walking Dead, a theocratic dictatorship creates a nightmarish regime on The Handmaid’s Tale, and mere precipitation kills on Netflix’s Danish ecological thriller The Rain. Every month or two another show starts where society ends. 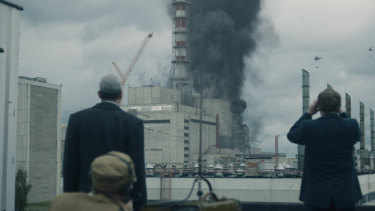 Radioactive dust spews into the sky after a catastrophic accident in the HBO mini-series Chernobyl.Credit:Fox Showcase

Plainly there’s a level of pessimism – and the need for escapist release – in these diverse depictions of life after the fall, but they’re also a means of getting to grips with what we’re trying to imagine. Chernobyl, a grimly compelling series screening weekly on Foxtel with all five episodes streaming online, is particularly incisive. By using events in 1986, set under a totalitarian regime that subsequently collapsed into the dustbin of history, the show is able to comment on 2019.

With its sallow green hallways, brutalist concrete edifices, and rampant moustaches Chernobyl looks like another time, but it doesn’t sound that different. “So I should leave now because of something I can’t see at all,” an 82-year-old farmer rhetorically asks the young soldier come to evacuate her after an explosion sends vast amounts of radiation spewing into the sky. “No,” she concludes, and it’s difficult not to see climate change as the allegory behind these repeated moments of intransigence.

“I prefer my opinion to yours,” a local party boss dismissively tells Ulana Khomyuk (Emily Watson), a nuclear physicist who tries to raise the alarm about how serious the accident is. Chernobyl is an indictment on the official fictions of Russia’s one party communist state, a system of crippling shortcuts and absurd obeisance to power, but the blank and bureaucratic system has a familiar feel. One dissenter is threatened not with the bullet but professional obliteration, so that there’s no trace of their life’s work. That’s only more relevant now. 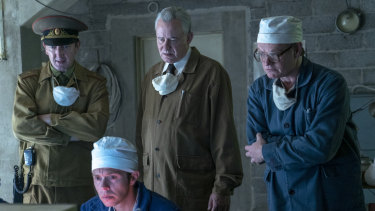 Written by Craig Mazin and directed by Johan Renck, the drama begins in the moments after the devastating eruption, unfolding as a ticking clock clean-up thriller, a mystery about the cause of the accident, and a study of individuals confronting the power that has nurtured them. Both nuclear scientist Valery Legasov (Jared Harris) and government minister Boris Shcherbina (Stellan Skarsgard) are insiders, lying about the risk to first responders or asking miners to risk life-threatening contamination to help prevent a complete nuclear meltdown.

Like all historic recreations it changes details and amalgamates characters into fictionalised representations such as Watson’s Khomyuk, but it succeeds through a dry tone that has the bitterest of aftertaste. It mostly doesn’t allow for sentimentality: when the mining crew foreman asks Shcherbina if his men will be looked after properly for their sacrifice, the political party boss replies “I don’t know” and the phlegmatic miner is actually satisfied. It’s a dreadful answer, but for once he’s been told the truth. 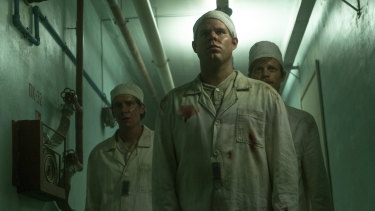 Engineers are dispatched on life-threatening assignments in the aftermath of a nuclear reactor’s failure.Credit:Fox Showcase

The show is exceptional in revealing – in steady, shocking increments – how a large-scale disaster distorts everything it encounters. At first it is the truth, but the human casualties soon follow. Firefighters who pick up pieces of the reactor casing are so contaminated that their very cells tear themselves apart. “He’s my husband,” one desperate wife (Jessie Buckley) tells a nurse trying to evict her from the hospital. “He’s something else now,” the nurse replies, and horrific transformations are a recurring motif. 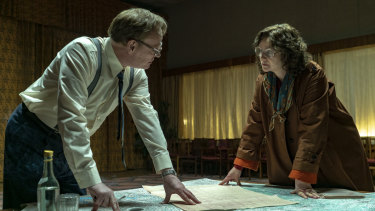 People are evacuated from an Exclusion Zone, animals are shot, and the very earth itself is dug up for 100 square kilometres to be buried elsewhere. The lessons are terrible but instructive: stemming the damage is not the same as fixing the problem. Chernobyl has been an unlikely success with viewers, growing its American audience with each episode and becoming the top-rated show on the website IMDb.com. Its appeal is readily apparent. It reflects our present and gives form to our inexplicable future.

'Below Deck Med': Kate Chastain Sides With Malia White Over the Cabin Dispute