John Mellencamp has churned out some of our favorite old-school hits like “Jack and Diane,” “Pink Houses,” and “Small Town,” and for that, we love him. The crooner also happens to be the father of one of our favorite Real Housewives of Beverly Hills, Teddi Mellencamp. He has dated many women during his career — including Christie Brinkley — but perhaps his most high-profile relationship was with Meg Ryan.

Closer Weekly reported that Mellencamp and Ryan started their relationship in 2010. From there, the pair went through plenty of ups and downs, and they broke up in 2014. Just months after calling it quits, the couple rekindled their romance, but it didn’t last long. They broke up in October 2015 and reunited again in 2017. With that reunion came a proposal, and members of Mellencamp’s family seemed to be on board with the pending nuptials.

“I’m thrilled. They are such an amazing couple,” Teddi Mellencamp told Closer in 2018. “They are both smart and funny. Their conversations are interesting and like watching a ping-pong match. They really bring out the best in each other — like all good couples do.” Sadly, the two called in quits (supposedly for good) in 2019. Per People, he then dated Jamie Sue Sherill for a year, but the two broke up in January 2021. His most recent relationship was with a realtor named Natasha Barrett, but, sadly, the couple’s courtship didn’t last long either.

Keep scrolling for more deets on their split. 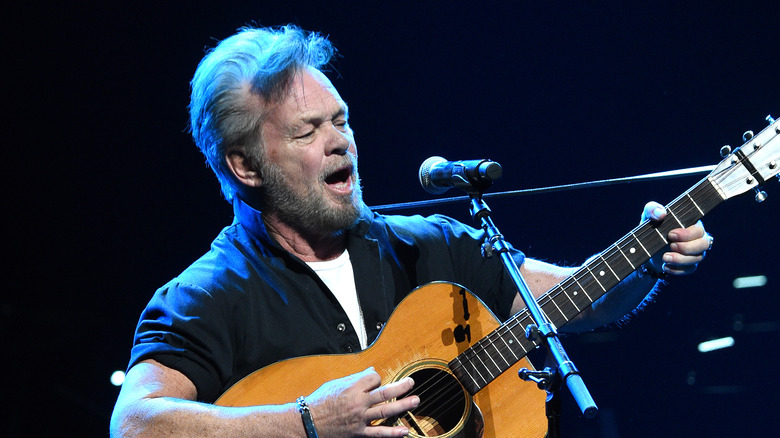 John Mellencamp is single… again. The singer has been in and out of plenty of relationships throughout his life, so it may not come as a surprise that another one bit the dust. According to Page Six, Mellencamp and realtor Natasha Barrett only dated for a few months before their demise. What happened? “It just didn’t work out,” a source close to Mellencamp told the outlet.

The same insider revealed that Mellencamp has a lot going on, seeming to hint that his schedule may have also played a role in the split. “He’s got a new album coming out [and] his Farm Aid festival coming up.” In addition, the rocker is also shooting a new video, making little room in his schedule for a significant other we suppose.

In June, People reported that Mellencamp and Barrett were going strong shortly after meeting. Photos from the outlet even captured the two smiling and holding hands on the beach. “He met her through his daughter Teddi Jo, who lives in L.A. They’ve been seeing each other for a few months,” an insider shared. The same source also said that Mellencamp’s inner circle really liked Barrett.

Mellencamp has made a habit of keeping his personal life out of the spotlight as much as he can. He only uses his Instagram account to share upcoming projects and artwork. Yep, he’s a painter, too… talk about a man of many, many talents.