On her new single Get to It, singer-songwriter Tia Gostelow declares that, “I don’t want to waste my time”, and the 19-year-old is true to her word. With its shuffling drums and insistent bassline, the track has a natural momentum that she harnesses with lyrics that exhort the listener to move on before a massed chorus offers the final push. If it sounds like a manifesto for change, Gostelow is now happy to agree. 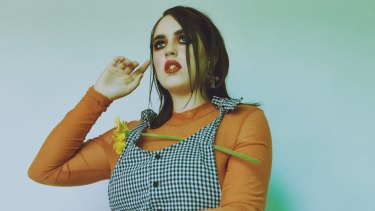 “I had no idea of that when I was writing it. The song only made sense recently when I was sitting with my parents and they said, ‘this song seems like you wanting to start your next phase’,” Gostelow says. “I realised that I now know what I want to do, and that the next phase will be something that I’ll have more control of. I feel like I’m more organised. I know what I want.”

There’s this weird shock factor people have when they figure out how young I am.

The upcoming national tour for Get to It will be something of a turning point for the Indigenous artist, who’s now based out of Brisbane after growing up in the North Queensland city of Mackay. She has a batch of new songs and the lessons learnt from the touring, both here and overseas, that followed the September 2018 release of her debut album Thick Skin.

“I was in Europe for a couple of months and I finally realised how rigorous and demanding touring is,” Gostelow says. “At this point I have to learn to look after myself and be healthy even though it’s so hard to eat well and take care when you’re touring.”

Get to It was written with an audience in mind, as well as the many sounds Gostelow heard from the side of the stage over the last year of gigging. Gostelow has just started to experience the feeling of watching people’s moods and movements and motivations change as they listen to her perform, and she wants to encourage that. The musician wants her audience to break free, and intends to do the same with her next album.

“I feel like I have such a defined idea of what I want the next album to sound like and how I want people to feel when they hear it,” Gostelow says. “The last couple of songs I’ve written I had no idea I could write something like each of them. It’s the melodies and the whole vibe of them – I started off as a folk-country artist and this new stuff is pretty unfathomable.”

On a recent songwriting trip to Melbourne Gostelow found herself separately sitting opposite alternative-pop powerhouse Alex Lahey and experimental electronic producer Alice Ivy, which is an indication of how she’s willing to change up expectations. The sense of excitement in breaking fresh ground is exacerbated by Gostelow’s age – she’s still a teenager, discovered at high school by Triple J Unearthed’s Indigenous Initiative in 2016.

“There’s this weird shock factor people have when they figure out how young I am. They ask me, ‘how are you doing all this at such a young age?’ Sometimes I have to make myself step back and think about all the cool stuff I’ve been able to do and be grateful for it. I even forget I’m a teenager sometimes.”

Giveaways: win a winter getaway or tickets to food and wine

No More Bystanders: Why It's Time for Country Music Fans to Step Up