Chris Brown is no stranger to legal issues, and it’s clear that the first half of 2021 hasn’t been so eventful for him. The singer is facing a lawsuit after his dog allegedly attacked his former housekeeper’s sister. According to court documents obtained by People, Patricia Avila and her sister Maria were cleaning Brown’s house in December 2020 when his Caucasian shepherd “viciously” attacked Maria. Avila claims she has suffered “severe emotional distress” and is “reluctant to leave her home and cannot stop re-living the pain that she experienced as she watched her sister suffer through that horrendous attack that day.” With that being said, she’s suing Brown for an undisclosed amount of monetary damages related to the incident, including loss of wages, medical expenses, emotional distress, and pain and suffering.

In June, TMZ reported that the “Heat” crooner is currently under investigation for allegedly slapping a woman so hard that “part of her weave [came] out.” Despite having an undeniable amount of talent, trouble always seems to find Brown and overshadow his accomplishments. The singer is facing yet another lawsuit — read on to find out why.

Chris Brown is accused of copyright infringement over this 2017 song 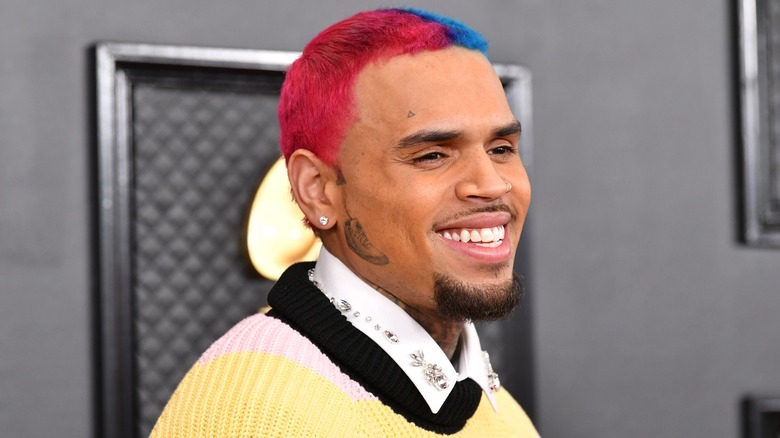 Chris Brown is facing his second lawsuit of the year — this time, the singer is being accused of copyright infringement. According to court documents, Greensleeves Publishing is suing the singer, Sony Music, and the entity Chris Brown TV, accusing Brown of stealing “the core musical feature” of dancehall artist Red Rat’s 1997 song “Tight Up Skirt,” for his 2017 multi-platinum hit “Privacy.” The publishing company claims the singer used the song without permission.

Red Rat is not listed in the lawsuit — however, the musician claimed that when Brown’s “Heartbreak On A Full Moon” album dropped, he was “getting many calls left and right from many people asking me about my thoughts regarding [Chris Brown] sampling ‘Tight Up Skirt’, and all I can say is, ‘Give God all the glory.’ (via HotNewHipHop).” In the original track, Red Rat sings, “Hey you, girl inna the tight up skirt! /You make me head swell ’til me blood vessel burst.” Brown interpolated the lines in his own rendition, singing, “Ayy you, gal, inna di tight up skirt /Get that a** in the bed, I’ma lock the door.”

Greensleeves is seeking over $500,000 in damages and over $1,000,000 for “the gains, profits, and advantages [Brown and SME] have obtained as a result of their acts of copyright infringement.” The publishing company is also asking for “a preliminary and permanent injunction enjoining defendants and all persons acting in concert with defendants from manufacturing, reproducing, distributing, adapting, displaying, advertising, promoting offering for sale and selling or performing any materials that are substantially similar to the copyrighted work (via Music Business Worldwide).”  The case is still pending, as of this writing.

Did Elton John Have More No. 1 Hits Than the Rolling Stones?

Hungary Pulls Out of 2020 Eurovision Over LGBTQ-Friendly Policies?