Decades before Greg Kurstin was producing hits for Adele, Paul McCartney and the Foo Fighters, he was a preteen Van Halen diehard. “I saw them on their Diver Down tour,” he remembers. “I got to see them play ‘Unchained,’ and that was amazing. I was a massive Van Halen fan at that time.” So when he met singer Inara George and formed the jazzy synth-pop duo the Bird and the Bee with her, he was excited to learn that she, too, was a Van Halen stan. You wouldn’t guess it from George’s twee vocals or Kurstin’s dense electronic arrangements, but they have a huge respect for David Lee Roth’s vaudevillian “Have you seen Junior’s grades?” schtick and the pyrotechnics of the Van Halen brothers.

So they decided to pay homage to the band the same way they did to Hall and Oates’ a few years back, by digging deep into their heroes’ psyches and covering nine of their favorite songs (as well as revisiting their own Roth tribute “Diamond Dave”) on Interpreting the Masters Volume 2: A Tribute to Van Halen. They even recruited Dave Grohl to do his best Alex Van Halen on the drum kit for a few live performances, including “Ain’t Talkin’ ‘Bout Love” on The Late Late Show With James Corden.

So far, they haven’t heard for sure whether or not the members of Van Halen like what they’ve done, but they have hope. “Through the grapevine I heard that David Lee Roth heard it and liked it,” George says. “We hope they like it.” Here, she and Kurstin break down some of their favorite Van Halen bangers. 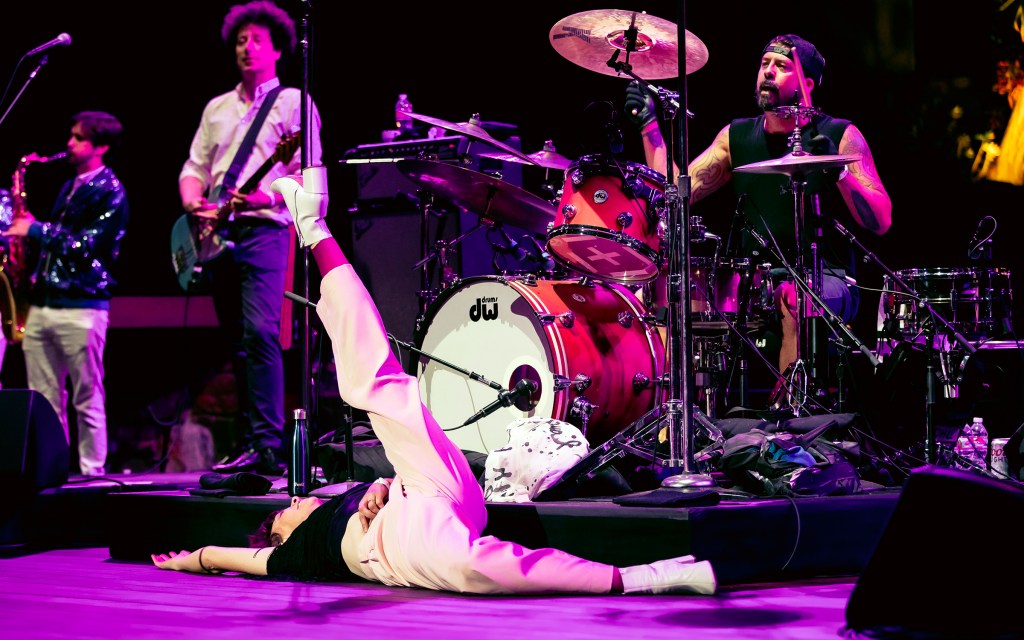 Dave Grohl performs with the Bird and the Bee in Los Angeles in August 2019. Photograph by Carlos Gonzalez/The1point8 for Rolling Stone

“Runnin’ With the Devil”

“Greg and I know always know when we’ve recorded what could be the outline for the rest of the record, and I feel like that happened with ‘Running With the Devil,’” George says. “It was like, ‘Oh, OK. It’s, like, jazz piano and revoicing the vocals. So it was a fun realization that when reinterpreting the music, you have to come at it as the people that you are rather than trying to imitate.”

“With most of Van Halen, we’re taking guitar songs and putting them on keyboards, but ‘Jump’ is a keyboard song,” Kurstin says with a laugh. “So I was like, what do I do? Inara’s voice is one of the great instruments I get the privilege of using, so she simply sang in each part [of the synth arrangement].” “It has a more synthy thing,” George says, “because some of my vocals were pitched down.”

“My version of ‘Eruption’ was a little bit more of a jazz, classical take on it,” Kurstin says. “I feel like Eddie’s solo on ‘Eruption’ is very classical. I thought, let me go to the roots of that and bring it back to a piano and reharmonize it and treat it like a jazz or a classical piece. That’s how I approached Eddie’s guitar playing in general.”

“When you’re a kid, you don’t always think about the meanings of the songs, and I was pleasantly surprised by David Lee Roth’s lyrical content,” George says. “‘Jamie’s Crying’ is such a sweet song and I didn’t think of it that way. It’s a song about a girl that doesn’t want to have a one-night stand, and how it’s painful not to have that connection with somebody but she respects herself enough to not do it. It’s unexpected for that band at that time, given the way they presented themselves. You wouldn’t think that’s what they would be singing about. I was pleasantly surprised.”

“‘Hot for Teacher’ was really tricky,” Kurstin says. “I tried many different versions. I tried a New Orleans version and a bunch of different things and kind of ended up with a hybrid of all the styles. We have Omar Hakim on the drums. He told me he was a Bird and the Bee fan, and I was like, ‘Wow, I’m such a fan of him because of his drumming with David Bowie, Weather Report, and Kate Bush.’ He could do anything. I thought if I could get Omar on this, that would be great. Once he got on there, it all fell into place. And I started pulling some darker synths and getting Beck on there to do the teacher’s voice was the cherry on top. He was brilliant with the spoken-word thing that he did.”

One of the Simple Secrets Behind Harry Styles' Iconic Fashion Sense