It’s a world full of car commercials, and we’re all just living in it. That being said, there are a few ads that stand out from the rest, whether it be because they’re inspiring, memorably strange, or hilarious (mostly the latter). There was the Mazda commercial from the early 2000s in which a little kid whispers “zoom-zoom” (which would fall into the strange category). There was also that great Super Bowl commercial for Volkswagen about a shaggy dog running up and down the stairs to get in shape to chase cars more efficiently. And who could forget the recent iconic Allstate “Duet” commercial — not a car ad, but a car insurance ad. We digress.

One of the most enjoyable recent car commercials would be a March Buick ad called “Quadruple Take,” in which four different versions of the same woman sit in a Buick and make quips about how they can’t parallel park, how hard spin class is, and how awesome Buicks massage chair mode can be. It’s a pretty funny commercial and #TBH, now we kind of want to buy a self-parking Buick.

Aside from the laughs, fans were quick to notice that the actor (or four of the same actor) looked pretty familiar. Here’s where you might know her from.

Vanessa Curry is a triple threat 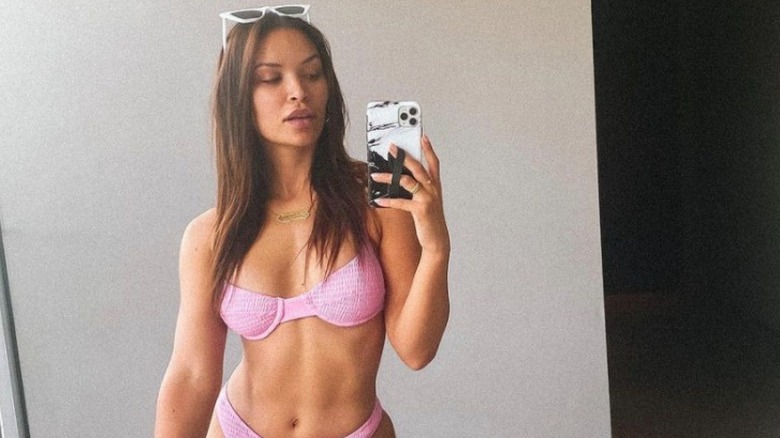 If the actor starring in the new Buick commercial looks familiar, that’s because she is. And you might not know her name but you probably know her singing or dancing chops — it’s Vanessa Curry! Before becoming a Buick spokesperson, Curry found fame as a member of The Pussycat Dolls where she worked as a vocalist and dancer. She joined the group in 2012 for the Super Bowl. Before that, she was a Laker Girl, enabling her to develop the dance skills needed to join the group, per International Business Times.

Since leaving the group, Curry has focused her efforts on acting. She’s landed roles in “Glee,” and “CSI: NY.” Additionally, she’s also worked as a model both in print and on screen for brands like Covergirl, Urban Decay, and KKW Beauty, per IMDb. Curry loves her job and even loves the Buick ad as much as we do. “New Buick commercial out here really capturing my Gemini brain,” she wrote after sharing the video to her Instagram in March. Whatever your sign, this commercial is hilarious and Curry was the perfect relatable yet aspirational star to bring the role (or, again, four roles) to life!